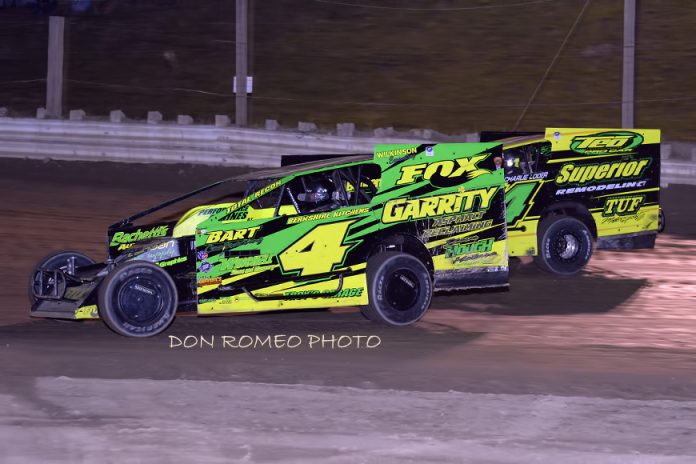 Bachetti, of Sheffield, Mass., appeared poised for victory in the 2016 visit by the Bob Hilbert Sportswear Short Track Super Series (STSS) Fueled By VP to the high-banked, paperclip-shaped oval. However, while racing into the lead in the final laps, he slid off the top of turn three and lost his chances.

That all changed Wednesday night.

Bachetti was able to overcome a poor initial draw through the gate, top his heat race and charge to the win in the ‘Hustlin’ the High Banks 53’ presented by NAPA Auto Parts, Two Rivers Timber and Maple City Dodge.

The ‘Wild Child’ earned $5,300 for his efforts and pressed into the point lead with two events remaining in the STSS Halmar North Region.


“It feels good to win one here,” Bachetti said of his first-ever triumph at the Ted and Brandi White-owned facility. “We had one get away from us last year here. Tonight, it all worked out in our favor.”

Bachetti, via a redraw of top qualifiers, started fifth in the field of 29. In just two laps’ time, he had driven his fluorescent green and black No. 4 into the top spot.

Red-hot Matt Sheppard put the Sweeteners Plus No. 92s into the third spot on lap 10.

During a 20-lap green-flag stretch during the mid-portions of the event, Danny Creeden joined the leaders, advancing to fourth after starting 13th.

Yellows on laps 40 and a final, green-then-checkered opportunity on lap 52, brought the field to Bachetti’s bumper. He was not to be denied, however.

The win for Bachetti was the third of his career with the STSS, having two checkered flags at Orange County Fair Speedway in Middletown, N.Y. (2014 & 2017) to his credit.

“This gives us some momentum going into the last two North series shows,” Bachetti bottom-lined.

Perrego, a two-time STSS winner this season in North Region action, settled for second-place pay ($3,000) with the Brian Smith operation. Waterloo, N.Y.’s Sheppard ended his drive in third after citing tire selection as his downfall in the short runs.

HIGH BANK HOT SPOTS: A band of heavy rain and severe weather on the original Tuesday date forced the postponement of the event by 24 hours to a beautiful Wednesday with bright sunshine and temperatures in the 70s. A healthy crowd turned out despite the rain date….

Andy Bachetti pulled ’43’ out of a possible 60 through the date, but was not deterred by the poor draw en route to the win….

Despite the busy program, STSS Modified action was completed by 9:40 p.m. through a quickly paced show….

A scare for Tommy Meier during hot laps was ultimately diagnosed as a dead battery on the Jeff Behrent-owned No. 3….