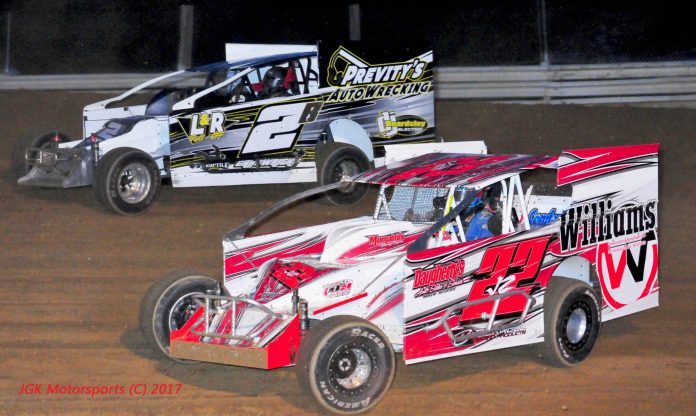 WOODHULL, NY –  It’s safe to say that entering the 2017 season, Jeffery Daugherty never could have imagined that he would start the season by scoring a win in a Crate Sportsman feature and go on to later add three Insinger Performance 370 Modified feature wins in the same season.

Following Saturday night’s thrilling feature on Legends of Woodhull night, he has done just that.

Daugherty wrestled the lead away from Russell Morseman exiting turn four to click off lap two and would lead every lap until the checkered flag on lap twenty-five.  The race went green-to-checkered, but to say Daugherty just cruised away would not even come close to telling the story in this one.


Billy Van Pelt, who started ninth, made Daugherty earn every inch over the course of the final fifteen laps.  Van Pelt was after a weekend sweep, after winning a big race at Freedom Friday night that qualifies him for the Outlaw 200 at Fulton Speedway.  But with the championship in the balance at Woodhull, Van Pelt was clawing for every position and every point Saturday night.

Daugherty would have to survive an onslaught of pass attempts from the eighteen-time track champion, if he was going to go on to win his third feature of the season.  Van Pelt got right up to the back bumper on Daugherty, who had to fight lapped traffic twice in the closing laps to hold on to the win.

Daugherty left just enough room for Van Pelt to take a peek with five laps to go, but would shut the door in turn one to potentially preserve the victory.  The youngster out of Elmira streaked to the checkered flag, to the cheers and applause of the fans who knew they had for sure gotten their money’s worth on this night.

Van Pelt was second across the line and was the first to congratulate Daugherty, with a thumb’s up of approval after exiting the scales.  Brady Fultz scored his third-straight third place finish in Woodhull weekly competition.  Morseman had a solid run and great battle with Fultz to finish fourth, while Donnie Lawson gained a spot to finish in the top five.

In what has really become an interesting battle to follow in the NAPA Crate Sportsman point race, Dale Welty made a statement Saturday night by scoring the win over Stevie Hartman III.  Welty started tenth, but quickly moved to the top spot in a race that was littered with caution flags.

Hartman started sixth and didn’t have as easy a path to the runner up position, as the race threw many obstacles to avoid in Hartman’s direction.  Not even a one-lap dash could keep Welty from scoring his third win when his team needed it the most.  The family-owned team started their night off on a sour note as they have many times this year- by drawing a terrible number for their heat race.

Hartman was able to win his heat, picking up three bonus points, while Welty could only manage a fourth place finish.  That gave Hartman a one-point lead going into the feature, but with the feature victory Welty will now take the lead back by three toward championship night next week.

Brandon Butler fought early and often to somehow manage a podium finish, after an eventful race with many incidents happening in front of him that he was collected in.  Josh Keesey and Dayton Brewer once again scored top five finishes to add to their season totals.

Butler’s night started off pretty well, as he took the checkered flag in the Crate Sportsman/Crate Late Model ‘Top 3 Dash’ sponsored by the Anonymous Race Fan.  Three Sportsman and three late models were grouped together for a six-lap dash for cash paying Butler $300-to-win.  John Waters was the first Crate Late Model across the line, earning him a $200 bonus.

It wasn’t easy for Waters, but he would capitalize on having a great handling car late to pick up the win in the SWL Crate Late Model feature later in the night.  Waters got the lead with three laps to go, and brought Kurt Stebbins and Darin Horton across the line as the top three.

Waters’ teammate, Steve LeBarron, looked like he had the car to beat.  But after jumping the cushion and having trouble navigating the outside lane, LeBarron would fall to the fourth spot.  One moment got particularly hairy for LeBarron, as the car jumped the cushion and nearly overturned at the apex of turns three and four.

Kurt Stebbins would have better luck in the Joe Willcox Performance Automatics Street Stock twenty-lap race however.  Stebbins was very fast, but would have had trouble catching and passing race-long leaders Teddy Morseman and Dylan Cecce without more than twenty laps to work with.

But an incident exiting turn four coming to the white flag between Morseman and Cecce changed the while complexion of the race and potentially the championship battle.  Cecce had been all over Morseman, trying to make a race-winning pass and a pass that would have swung control of the championship in his direction.

But Morseman wasn’t going to lay over by any means.  Morseman made Cecce work for every inch as the pair raced nose-to-tail over the last thirteen to fourteen laps of the race.  On lap eighteen, Cecce tried to go low to drag race to the white flag.  He and Morseman made contact in turn four, and more contact on the frontstretch that eventually cut Morseman’s left rear tire entering turn one.

The altercation gave Stebbins the opportunity he needed to not only catch the leaders, but make the pass for the lead entering turn one.  While Cecce would follow Stebbins across the line, he would not finish there.  Race officials levied a penalty of two positions behind Morseman, who finished fourth, leaving Cecce with a sixth place finish.

Tracy Dunn ended up with the most eventful second place finish he’s likely ever had, while Mick Seeley reached the podium again in third.  Morseman was scored fourth and Brett Marlatt kept his foot in the door for the championship with a fifth place finish.

Morseman will now take a five-point lead into championship night this Saturday over Cecce, seven points over Marlatt and fifteen points over Stebbins, who cut his deficit by eight points with the win.

Cecce went on to win the first ever Street Stock King of the Ring during intermission.  Cecce beat out Dan Gardner in the finals, with Gardner driving the same Potter chassis that Cecce raced to many wins and the 2015 Street Stock track championship at Woodhull.

After a season of trials and tribulations, Rick Amidon finally parked his No. 2 Mini Stock in Instant Heat Wood Pellets Victory Lane for his first career Daugherty’s Auto Sales Mini Stocks victory.  Amidon had been so close, but just hadn’t been able to close the deal.

But no messes in front of him, not even three bad cam shafts, or hours upon hours of shop time making cosmetic repairs was going to keep him from getting that hard-earned checkered flag.  All of the bad luck aside, Amidon had to hold off the hottest Mini Stock driver of late in the division in Dylon Gleason.

Gleason threw everything he had at Amidon to get by, but Amidon was running smooth and steady through the middle of the track on exit.  The younger Gleason out of Elmira, was backing his corners up, trying to outbreak Amidon to get that run off the corner exit but just couldn’t make it work over the last handful of laps.

Chris Woodard had a great seat for the battle for the lead, finishing third and sealing up his second-straight Mini Stock track championship.  Jason Ketrow was fighting his car on handling but managed to bring it home fourth, while Scott Lehman continued his great season with another top five.

The Woodhull Auto Supply Front Wheel Drive division saw Codie Baker pick up the victory on Saturday night, after a daring move on the cushion to sweep past the front pair to take the lead.  Shawn Gleason and Matt Prescott had an entertaining battle of their own for the lead, with Prescott running the middle and Gleason trying to ride the cushion.

But when Gleason switched to the low lane, Baker shot to the outside, said a prayer and came off turn four with the lead and eventually the win.  Gleason brought it home in second and will now carry a five-point lead into championship night in what appears to be a repeat of the thrilling finish that was seen last season.

Brooke McClain was mere minutes away from not being able to start the Daugherty’s Auto Sales Warriors ten-lap feature.  Her crew discovered a bad rear wheel bearing while she was lined up in the lineup area and quickly had her climb aboard their team car No. 24 that is driven by Anthony Schoonover in the Front Wheel Drive division.

McClain had issues fully reaching the pedals in their team car, but certainly had no issue with the gas pedal, as she passed point leader Cole Youse and then held him off for her second win at Woodhull in 2017.  Youse had one opportunity off turn four to try and take the lead, but saw the opening quickly close as they raced toward turn one.

Though it wasn’t a win on Saturday, Youse will need to just take the green flag next Saturday to lock up his first Woodhull track championship.

In a race that saw ‘The Rocket’ Roger Williams and Jerry Symonds compete in Legends of Woodhull night in the Hobby Stock division, a very patient Carter Dennis picked up win number eleven of 2017.

Dennis had to use patience to take the lead from early race leader Aaron Miller’s No. 20.  The driver who returned to racing in 2017, ran the low lane and used a soft right foot to slowly work his way past Miller near the halfway point of the race when Miller got caught up on the tricky cushion in turn four.

Dennis French ran a great race to finish second, Miller was third, Williams fourth and Eric Williams filled out the top five.  Symonds, returning to behind-the-wheel action for the first time in well over twenty years, finished on the lead lap in sixth after an excursion through the infield in turn two.  However, the goals of having fun and finishing on the lead lap were clearly met.

The Legends of Woodhull Night kicked off with a pre-race cookout and reunion.  Twenty guests attended, shared stories, enjoyed food and drink courtesy of Woodhull Raceway and spent a lot of time visiting Morgan Colegrove’s memorabilia table.  Bob Johnson brought his Mustang restoration project car to display, as well as another Woodhull Legend bringing out a Richard Petty No. 43 look-a-like car that was displayed and used to pace the Hobby Stock feature.

The Five Rivers Council of Boy Scouts were on-site for their annual ‘Thunder in the Hills” event.  A pinewood derby race took place, with Woodhull fans voting on ‘Best in Show’ awards.  The Boy Scouts and leaders also presented colors, recited the Pledge of Allegiance and raised the American flag for the national anthem.

This coming Saturday at Woodhull Raceway is Season Championship Night sponsored by Kibbe Oil and Gas Field Services.  A driver appreciation pig roast will take place in the pit area to thank all of the teams for their support of Woodhull Raceway in 2017.