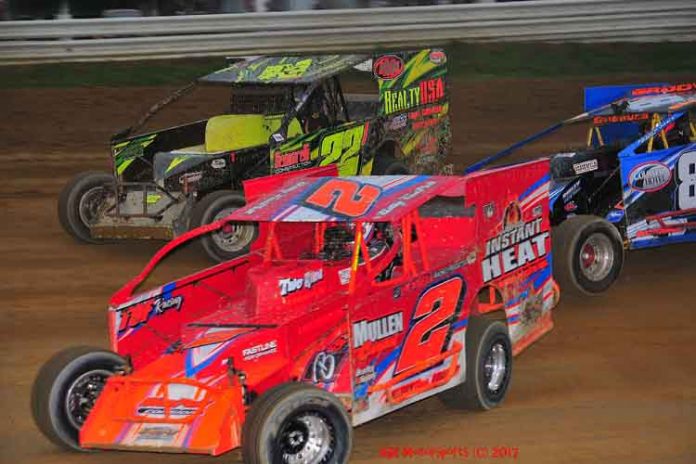 WOODHULL, NY – Billy Van Pelt’s team sold their No. 2 machine on September 1 at Freedom Motorsports Park, leaving the 19-time champion to race the team’s No. 13 mount on championship night.

When the motor in that car had an issue and the car was sold after championship night, that left the driver from Westfield, PA essentially without a ride for the Fall specials at Woodhull.

Hoopes purchased the Instant Heat Wood Pellets No. 2 from Kevin and Karen Chilson’s race team and took delivery after the September 1 show at Freedom. But with Van Pelt without a ride and Hoopes having a few chances to win races as a car owner before becoming an owner/driver, Hoopes opened the door for Van Pelt to drive.

‘The Deuce’ started in position number seven after the top 12 redraw and quickly passed cars on the outside to move into the third spot on lap five. Frank Dunning and Dillon Groover led the race off the drop of the green, but Groover struggled with a tight racecar in the opening laps.


Dunning was fast in his Swarthout Recycling No. 31 and battled Groover for the top spot up to the half way point in the event. Alan Rudalavage and Brady Fultz in his Big Block ride, also were quick early and carried on a spirited battle within the top five.

But after half way, Dunning and Groover caught lapped traffic that would no doubt change the outcome of the race. Dunning attempted to pass low exiting turn two, but the lapped car also chose the low lane and give up the outside for the leaders to pass.

Both Groover and Dunning had to check up hard in the exchange, which opened the door for Van Pelt to take advantage of their moment of misfortune. Once Van Pelt got out front, nobody was going to catch the driver who would go on to add another Sherwood Memorial to his impressive career resume on the ‘High Banks.’

There were a lot of connections that made this win special for Van Pelt.

“Patrick Hoopes bought the Sherwood shop and this car will go back to the shop Lyle worked out of all those years racing here at Woodhull,” explained Van Pelt in Instant Heat Wood Pellets Victory Lane.

“So for us to win in this car, tonight for Lyle’s race and knowing this car is going back to that shop makes this really special for me. I can’t thank Patrick for letting me wheel this hot rod before he jumps in for practice later tonight.”

Dunning, Groover, Rudalavage and Kenny Peoples Jr. filled out the top five after Peoples started outside the top ten.

Stevie Hartman had the Crate Sportsman feature won on Saturday night at Woodhull. Hartman pulled out to a full straightaway advantage coming to the white flag, but unfortunately for Hartman, he didn’t make it to the start/finish line to see the white flag.

In an unpredictable and caution-filled event, Hartman found himself in position to win. But coming through turns three and four, the back end of the Katie’s Concrete, Woodhull Auto Supply, RLB Trucking No. 15 came around and Hartman spun at the apex of the corner.

That handed the lead over to Jake Dgien with two laps to go. Dgien had quietly picked his way through traffic after pulling the eleventh spot in the redraw, to get to second in a classic battle with 2017 track champion Dale Welty. Oh, if they only knew how important that second position was going to be late in the race!

Dgien would outduel Welty over the course of the final two laps to pick up his third overall win of 2017. A season that started out in the worst ways it could have with engine issues, and sprinkled in two victories in Dgien’s HigFab chassis.

Just one week after Steve LeBarron and Kurt Stebbins battled it out on track for the 2017 Crate Late Model track championship, they found themselves battling it out again on Lyle Sherwood Memorial Night.

Stebbins and LeBarron traded the lead, as the pair worked high and low trying to get the advantage. LeBarron would end up coming out on top, just as he did last weekend when he won the title. Stebbins put on a show, but had to settle for second on this night. Jimmy Johnson made a rare Woodhull appearance and finished on the podium, while Darin Horton and Jason Knowles completed the top five.

The Street Stocks saw another epic battle between Teddy Morseman and Dylan Cecce on Saturday night. Cecce picked up the win in the fourth and final Clash for Cash event of 2017 during intermission, but it would be Morseman taking top honors in the 20-lap feature.

Morseman and Cecce started side-by-side in row three for Scott Lyon’s green flag. Morseman made his way to the lead first, but Cecce was right on his bumper before the race reached half way.

Cecce stalked Morseman lap after lap, waiting for an opening down low. But a late race restart saw Cecce take it to the top shelf trying to find a way by. Morseman was just too good on the bottom, getting a huge launch of corner exit in turns two and four and would go on to score the victory.

Kurt Stebbins and Cecce battled it out for second, as Cecce struggled to make ground up on the cushion that was pushed quite high in turns one and two. Cecce would get the spot back to lead Stebbins, Dan Gardner and Mick Seeley across the line in second through fifth.

Morseman made it a clean sweep of the night, as he drove his sister’s No. 44 Mini Stock to the win in the 20-lap feature. In Victory Lane, Morseman said his sister was late arriving on Saturday so he took over the controls for the night.

Morseman left no doubt, as he aggressively wheeled the car through the corners while leading. Amazingly, Morseman also said in Victory Lane that the car didn’t have the right gears in it. Not a great sign for the rest of the field, who finished nearly a full straightaway behind.

Codie Baker made quick work of the 15-lap Front Wheel Drive feature race. Baker got to the lead from his outside pole starting position after battling pole sitter Matt Prescott. Baker went on to win his fifth race in his last seven starts at Woodhull.

Nate Freeland won the heat race and finished second, just ahead of his teammate Prescott. Rob Gardner wheeled ‘The Great Pumpkin’ to fourth, while Nick Brown finished fifth in the ‘Super Subie.’

Brody Amidon scored his second career checkered flag on Saturday night in Woodhull Warriors competition. Amidon credited his dad and the crew on figuring out the bugs that plagued the team throughout 2017, as they look forward to a big year in 2018.

Saturday September 23 will be the ‘Joe Willcox Performance Automatics Full Fendered Frenzy’ featuring the Fight Night Street Stock Series’ running of the Woodhull 100. Also on the card will be a 30-lap Hobby Stock race, 30-lap Crate Sportsman and 20-lap races for the Open Mini Stocks and Open Front Wheel Drives.

Race fans should note that the Saturday September 23 show will start earlier than normal at 5:30PM.