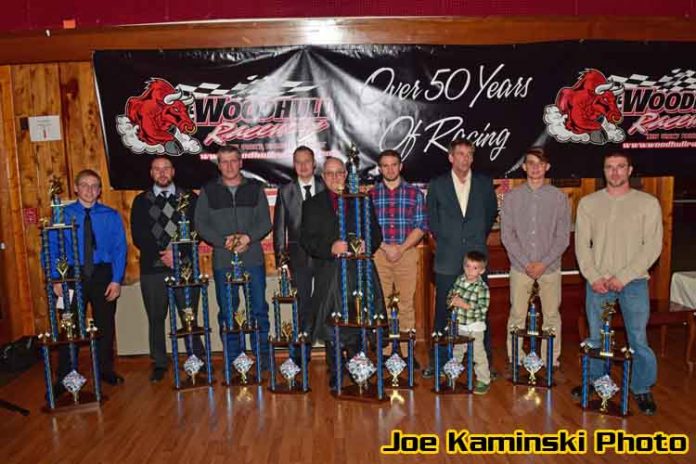 WOODHULL, NY – With over two hundred guests in attendance at the Watson Homestead Retreat & Conference Center in Painted Post, NY, Woodhull Raceway crowned the track champions of all of their divisions.

There were awards for the top point finishers in each division, along with point fund earnings as well as other bonuses earned from Woodhull’s great partners at Lias Tire/American Racer as well as Insinger Performance/Sunoco Race Fuels.

Billy Van Pelt was crowned for the nineteenth time in his career as a Modified track champion. This was Van Pelt’s fourth championship in a row and first championship since re-uniting with the team owned by Kevin and Karen Chilson. Van Pelt drove for Chilson prior to taking a ride with Grant Hilfiger from 2014-2016.

Russell Morseman was awarded the Sportsmanship Award for Modifieds. Morseman scored one victory, his first in a Modified at Woodhull, and was painfully close to have two on the year. Rookie of the Year honors went to Jeffery Daugherty, who scored three wins in only half a season of competition in the division.

The Dust to Glory Award was presented by Tony Van Pelt to Modified driver Brian Doolittle, who had a very respectable season with several top five finishes. Doolittle races under the tutelage of his father Larry who has great history at Woodhull and many other area tracks. Their team makes the most of what they have and are a great story of family in motorsports.


Dale Welty was crowned as the Crate Sportsman division champion, on the heels of a thrilling battle that came down to a single point over Stevie Hartman III. Welty also earned the Sportsmanship Award for the division. Kirk Reynolds traded in his track spatula and tongs for a steering wheel and a helmet, winning Rookie of the Year honors after just missing the top ten in points.

The soft spoken, heavy right-footed Steve LeBarron took home top honors over Kurt Stebbins in the Crate Late Models by one point. LeBarron celebrated his first Woodhull championship, while Stebbins received Sportsmanship Award honors. First-year competitor Darin Horton and Krise Family racing team was awarded Rookie of the Year, after a season where they celebrated many gains and are already rebuilding for 2018.

Dylan Cecce celebrated a seven win season while picking up the hardware for his second Woodhull title in the Street Stock division in the last three years. Cecce also won the first ever Street Stock King of the Ring put on by Joe Willcox Performance Automatics. Jim Weatherley called Woodhull home for 2017 and made it worthwhile, finishing tenth in points and winning Rookie of the Year. Branden Morseman received the Sportsmanship Award for the second year in a row, after enduring a tough year of racing luck and coming back each week with a smile on his face ready to go to battle.

Chris Woodard earned his second-straight track championship in the Mini Stock division. Dylon Gleason earned one points-paying win as well as a special event victory, enroute to Rookie of the Year for 2017. Gleason also finished second in the standings to Woodard. Faithful competitor and great guy, Karl Born from Williamsport, PA, was awarded the Sportsmanship Award for bringing a spare motor to the track and helping a fellow racer change that engine to race that night.

Codie Baker earned his first career track championship in the Front Wheel Drive division at Woodhull, after winning six out of the last nine feature events. Baker had to win the race in front of Shawn Gleason to win the championship, which Baker did by winning the race. Gleason received the Sportsmanship Award for a hard fought battle, while Scott Lehman Jr. earned Rookie of the Year honors by finishing fifth in points.

Carter Dennis took top honors and collected his championship jacket and hardware for the Hobby Stock division. Brent Williams finished second in points and was named Rookie of the Year.

Other special awards included Scott Lyon receiving the Dedication to Motorsports Award for his work and years of service to Woodhull Raceway as the head flagger as well as his work on awards, trophies, the car show and banquet and wherever else he has been called upon.

After calling it a career after forty years of racing at Woodhull Raceway, Brian “Corky” Grant Sr. received this year’s Perseverance Award. Grant was able to go out a winner, collecting a Mini Stock feature win back on Saturday May 13 over a fast-closing Jason Ketrow.

Joe Kaminski Jr. was awarded the annual Media Award for his dedication to Woodhull Raceway as well as his weekly contributions to AARN, Dirt Track Digest and the local paper he writes for in Pennsylvania- The News Item.

The annual Arnot Mall Car Show in Horseheads, NY is planned for St. Patrick’s Day weekend, March 16th, 17th and 18th. More information on the mall show and the 2018 schedule and returning sponsors will be forthcoming during the offseason.