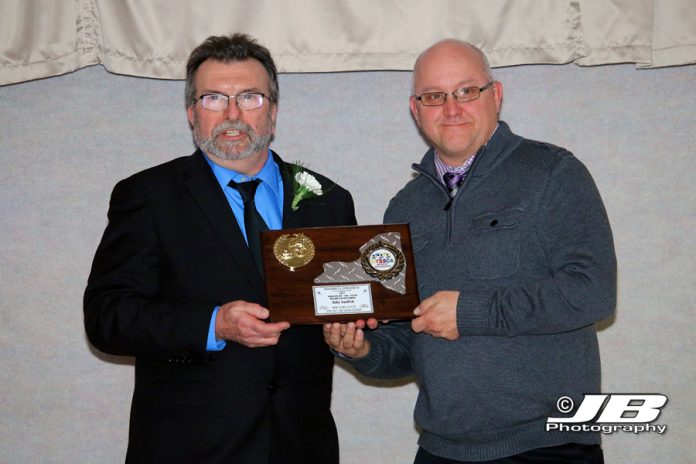 Racers from several states representing their home tracks that participate with NYSSCA were on hand to receive awards such as Driver of the Year, Performance of the Year, Newcomer of the Year and several other special awards.

NYSSCA is a group of area racers dedicated to the betterment of the sport through education and continued support. NYSSCA and its predecessor, the New York State Stock Car Owners and Drivers Club, were originally created as “sounding boards” for area racers to voice opinions and to effect change at local speedways. When NYSSCA was incorporated in 1969, the officers and board members expressed concerns over track safety and insurance matters.

Billy Van Pelt was honored as Woodhull’s Driver of the Year, after sewing up his nineteenth track title in the division over his illustrious career on the High Banks. Van Pelt was in his first full season back behind the wheel of the Chilson-owned No. 2. The team plans to return to Woodhull, travel to Freedom on Friday nights and take part in the North Region of the Short Track Super Series.

For his three-win season and second place finish in the final standings, Dillon Groover received the Performance of the Year award. Groover led the points at times in 2017, but just didn’t have the cards fall the right way in the closing month of the championship.


Darin Horton, a graduate of the Mini Stocks in recent years, was on hand to receive his Newcomer of the Year award for Woodhull’s Crate Late Model division. Horton made big strides in the Krise family-owned No. 66, taking a heat win in the second half of the year and several top five finishes. Plans are in place for Horton and “Atta Boy Racing” to march on in 2018, looking for that elusive first career Crate Late Model victory.

“The Weatherman” Jim Weatherley picked up honors as Newcomer of the Year for Woodhull’s Street Stock division in 2017. The Cuba, NY pilot was running his first full season on the High Banks in one of the most competitive divisions, after enjoying one of their first trips to Woodhull for the Street Stock 100 in 2016. The driver of the “Purple People Eater” No. 25 enjoyed a great night being honored in front of his New York State peers.

Chris Woodard for the second year in a row was recognized by NYSSCA as Mini Stock Driver of the Year for Woodhull Raceway. Woodard enjoyed a dominant season in 2017, wrapping up the track title weeks ahead of the Season Championships. Chris and wife Sarah were on hand to collect their well-deserved hardware for the second season in a row. Woodard’s plans for 2018 are up in the air as of this past weekend.

Finally, it was Scott Lehman Jr. who made the trip to Albany to be recognized as Woodhull’s Newcomer of the Year in the “Grass Roots” division of Front Wheel Drives. Lehman Jr. enjoyed a successful season in trying to keep pace with the Preludes of the division that dominated the year. Though in his first full season, Lehman Jr. was impressive and will surely only get better with more seat time in 2018.

The annual Arnot Mall Car Show in Horseheads, NY is planned for St. Patrick’s Day weekend, March 16th, 17th and 18th. Registration is open for this year’s show, drivers are encouraged to sign up early, as space is limited inside the confines of the mall.