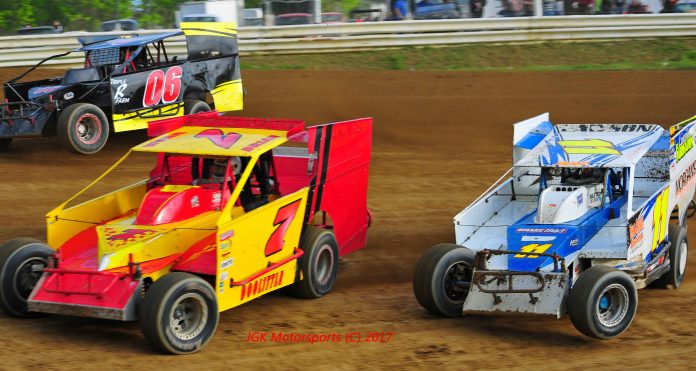 WOODHULL, NY – ‘New York’s Toughest Bullring’ is gearing up for their 2018 season- their 54th consecutive season of racing at the Woodhull, NY facility founded by the Williams family and now owned and promoted by Ted and Brandi White.

The annual kick off to the season, the Arnot Mall Car Show in Horseheads, NY, is planned for St. Patrick’s Day weekend March 16th, 17th and 18th. Registration is open for this year’s show, drivers are encouraged to sign up early, as space is limited inside the confines of the mall.

The first opportunity to hit the track, weather permitting, will be Saturday April 7 for an open practice session from 5:00-9:00.


Opening Day 2018 is slated for the following week, featuring a $1,000-to-win show for the Crate Late Models sponsored by Close Racing Supply. The Crate Sportsman will take center stage on Saturday April 21 for a $1,000-to-win affair sponsored by Lias Tire and Insinger Performance.

The quest for a career-defining 20 track championships for defending Modified champion Billy Van Pelt will kick off on Mountain Dew/Pepsi Night April 28. A wealth of competition including a few new players will all be ready to knock Van Pelt off the top rung of the Woodhull Modified ladder.

Brett Deyo’s Bob Hilbert Sportswear Short Track Super Series presented by Sunoco Race Fuels will move their traditional August date to a Wednesday on August 8, with a rain date of Thursday August 9. The Modifieds will go 54 laps for a winner’s share of $5,400, while the Short Track Super Series 602 Sportsman Series will race 25 laps for $1,000-to-win. The Street Stocks have been added to this card in 2018, racing Challenge Event No. 2 of 3 on this night with more details on the challenge forthcoming.

Twice on the schedule, Mike Emhof’s Patriot Sprint Tour will tackle the High Banks. First on Saturday May 12, followed by their traditional July stop on July 14. Their sister series, the CRSA 305 Sprint Tour, will return to Woodhull for their second ever visit on Saturday June 9 to see if Jeff Trombley can make it two-for-two.

Championship night on September 1 will be flanked by the Lyle Sherwood Memorial (Sep. 8), Street Stock Woodhull 100 (Sep. 22) and the season-ending Bullring Challenge Weekend September 28 and 29.