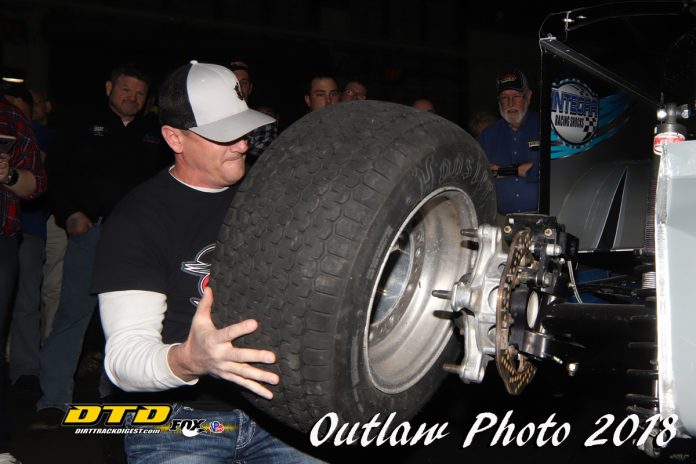 The popular Arnot Mall restaurant opened their newest location at the mall in 2017 and has been a major hit to the local community. Known for their homemade mac and cheese, Mooney’s has found success with their creative menu and generous portions.

Management from Mooney’s struck a deal on Wednesday with Woodhull Raceway to sponsor the growing and ever popular pit stop contest. The competition will see teams of three men or women compete in a right rear tire change to see who has the fastest pit crew in the local racing community.

Teams are welcome to come out and compete, regardless of what racetrack they frequent. The contest is free to enter and offers prizes to the top three finishing teams. The winning team in 2018 will also receive a special prize pack courtesy of Mooney’s Sports Bar & Grill.

Turn 5 Media will also present an award to the “Best Dressed Team,” won last year by the Seeley Racing Team. Creekside Entertainment will once again provide the sound system and wireless microphones for the event.


The rules to the competition are simple- one crew member will run the impact wrench to take the tire off, one member will jack the car up and the final member will carry the new tire to the car and carry the old tire back across the starting line. The lug nuts, once tightened, will need to reach a minimum rating on the torque wrench to pass inspection. Loose lug nuts will result in a three-second penalty.

Billy Van Pelt has graciously offered his Instant Heat Wood Pellets No. 2 for this year’s competition. Van Pelt’s car will be presented with Dale Welty’s No. 123 in center court all weekend long as the defending track champions in their divisions.

Race vehicles will be moved into the mall on Friday evening, with a driver’s meeting to precede the move-in at 8:30 in center court. The car show runs during normal mall hours on Saturday and Sunday as the official kickoff to the 2018 season at “New York’s Toughest Bullring.”

Visit www.woodhullraceway.com and Woodhull’s Facebook page www.facebook.com/woodhullraceway for all of the coverage of this weekend’s car show.