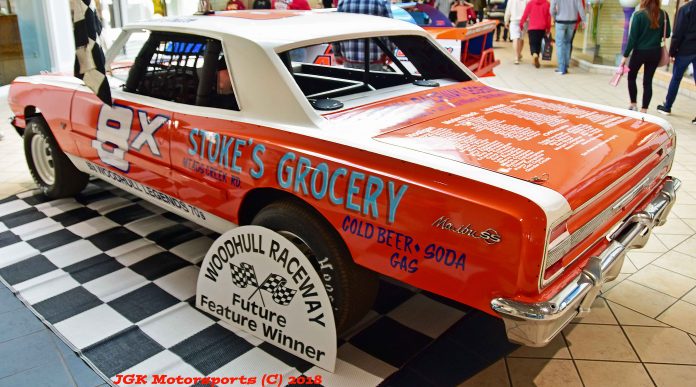 WOODHULL, NY – It is said that you can’t teach an old dog new tricks. But at Woodhull Raceway in 2018, there will be several of these so called “old dogs” that will be trying to accomplish what they might consider to be “old tricks.”

Annually, the Swarthout Recycling Woodhull Raceway Car Show is the opportunity to show off the best new or next to new cars that have been prepared for the upcoming race season. But this past weekend, it was the ‘vintage’ style cars that stole the spotlight in the Turn 5 Media Best In Show competition.

A small committee of mall show attendees helped narrow the forty-one-car field down to five cars that would go up for a fan vote on the track’s Facebook page to determine the winner. In that competition that started Monday and ran through Wednesday evening, it would be Les Smith’s ‘Tribute To Woodhull Legends’ No. 8x that would garner the most votes by almost double his competition.

Smith’s car was the leading vote-getter while Carter Dennis’ Bobby Allison look-a-like No. 22 that would garner the second most amount of votes. Both cars will compete in the Hobby Stock division in 2018- a division that is expected to be on the uptick with a large amount of interest throughout the offseason.

Smith recently joined Doug Elkins for an interview on Doug’s Dirt Diary, which will air on www.dougsdirtdiary.com on Friday, and talked about his 1964 Chevelle SS that got a lot of attention this past weekend.


“I was really really surprised this weekend (at how much attention the car received),” said Smith.

“We did the car in ‘Arnie Flint Orange’ who ran late models there and was one of my favorites.”

Smith said they went with the number ‘8x’ in tribute to his father’s racing legacy as well as local hero Malcolm Lane who Smith has always been a fan of. The sponsors on the car are those that Smith’s father carried on his car back in the 1970’s.

“We want to honor the past and the history with this car.”

Smith will be presented with the Best In Show Award in the coming weeks, courtesy of local media company Turn 5 Media located in Horseheads.

For Smith’s full 12-minute interview plus a special feature with Jeredd Dennis with Doug Elkins on Doug’s Dirt Diary, log on to www.dougsdirtdiary.com on Friday morning.

Visit www.woodhullraceway.com and Woodhull’s Facebook page www.facebook.com/woodhullraceway for all of the coverage of the 2018 race season.