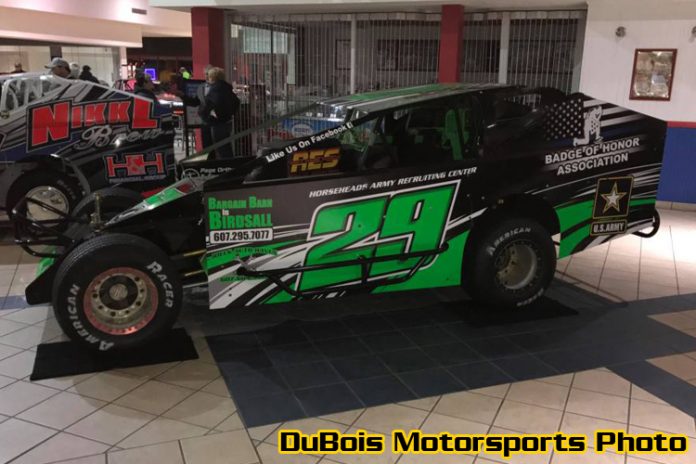 HORSEHEADS, NY – A nice follow up story from the 2018 Swarthout Recycling Woodhull Raceway Car Show was a running theme with a couple of the show’s entered cars.

David DuBois (NAPA Crate Sportsman) and Noah Talada (Joe Willcox Performance Automatics Street Stocks) were two examples that stood out as they took advantage of the mall show to spread awareness for the Badge of Honor Association and Mission 22 on the sides of their machines.

DuBois, a local Sportsman hotshoe who recently took over the driving duties of the family-owned No. 29, cultivated a marketing strategy of service in 2017 when he brought onboard the Horseheads, NY Army Recruitment Office. U.S. Army was proudly displayed on the side of the DuBois Motorsports No. 29 all season and was taken to several on-site activation events with the great folks from the Army.

DuBois also found himself in a great situation to work with the Badge of Honor Association, a local organization started in 2007 whose mission is to focus on supporting the families of police officers in the event of a line of duty death, and those officers involved in critical or serious incidents while on duty. They cover all law enforcement across 25 counties of Western and Central New York.

Clark Brown, the Regional Chapter Manager for the BOHA, recently released a statement discussing the new increased partnership for the 2018 season. DuBois ran a small promotion with BOHA in 2017, which quickly was an overnight success and led to increased presence in 2018.


“This is a new form of outreach to help promote our mission about our organization and to have a team like David DuBois Motorsports that supports law enforcement is a perfect fit,” said Brown.

There won’t be a lack of publicity, but it’s not about that for DuBois in this mission.

“For me it is not about the publicity, it’s about spreading the message and mission of BOHA and the support it provides to families of Fallen Police Officers and Officers involved in critical incidents,” said DuBois.

“My crew and myself are very pro law enforcement. I believe my race team is a good fit to help promote the BOHA because my team and I are passionate about the ideas that they stand for- honoring those who have made the ultimate sacrifice in service to their communities and supporting their families.”

To learn more about BOHA you can visit them online at www.BOHA.info or on Facebook at www.facebook.com/boha.org Race fans can also contact BOHA Regional Chapter Manager Clark Brown by email at ceb1brown@gmail.com.

Noah Talada had a lot of visitors of his own at the mall show a few weeks back, as he proudly displays Mission 22 on the side of his Street Stock for this season. Talada is a graduate of the Woodhull Warriors Youth Mini Stock division and will make the move to Street Stocks in 2018.

Mission 22 is a service organization that focuses on the war against veteran suicide. According to a Department of Veterans Affairs study, each day over 20 veterans take their own lives. It is a war that this study and Mission 22 says we are losing and can do something about. Mission 22 asks for support to let our veterans know that they have an army behind them.

Mission 22 has two treatment programs that focus on traumatic brain injury and post traumatic stress. Their program goals are not to medicate and mask the problems that veterans face, but to heal them.

The two programs include a whole person approach to healing veterans between Mission 22 and Full Spectrum Health. The other treatment program is a hyperbaric focused treatment that targets traumatic brain injuries. Just one 5-8 week program for one veteran can cost upwards of $6,450. Mission 22 raises funds to provide these treatments at absolutely no cost to the veteran.

The mall show ended on Sunday of St. Patrick’s Day weekend with an emotional meeting between Veteran and racer at the Talada space in the mall. A combat veteran named Justin stopped by and was quite moved to see that the youngster had donated the ad space on his race car to benefit an organization that helps veterans like himself. The veteran offered some of his own experiences, which moved anyone in the general area and ended with a firm handshake and a hug.

Recently, fellow Street Stock racer Jeredd Dennis also spoke publicly with Doug Elkins on his website Doug’s Dirt Diary, to talk about his experience as a combat veteran who experienced struggle and has helped so many others facing struggle after war. It’s one thing to read or hear of stories like these on the news or in the paper- but veterans like Justin and Jeredd help us make the connection to how this real problem affects those around us at home or at the racetrack.

Talada and DuBois set the bar high for the rest of us, on what we can do to help raise awareness for these great causes.