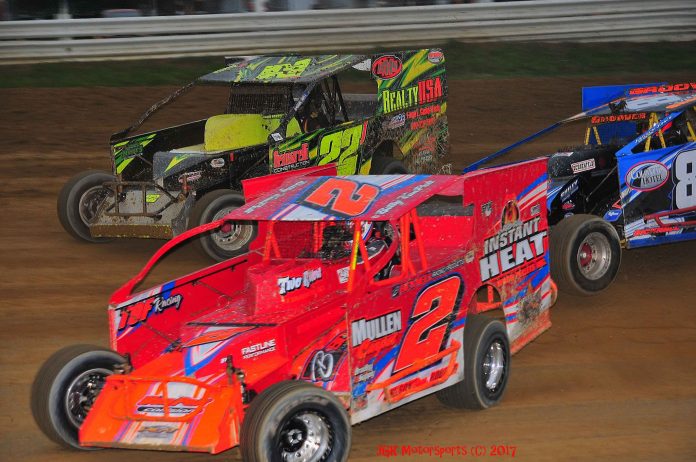 WOODHULL, NY – Mother Nature stepped aside and let Woodhull Raceway take center stage as the only Modified track in New York State get their event in Saturday night. It was a season opener that saw a passing shower roll through Steuben County at 3:30, but provided enough clearing to get their complete program in before rains came back just after 11:00.

Billy Van Pelt started the defense of his 2017 track championship and began his quest for a record 20th title with a big victory in the Insinger Performance Modifieds 25-lap feature event on Pepsi & Mountain Dew Night.

The starting field was set by a ‘Revenge Draw’ that took place by the Flagstand during a very short intermission, drivers drew a number and assigned that starting position to a fellow driver who qualified in the Top 12 from the heats. Mike Bills drew position number eleven and assigned that spot to Van Pelt.

Ron Cartwright Jr. and Bills would start on the front row for Scott Lyon’s green flag and it would be Cartwright who took control of the first half of the event. Donnie Lawson, Joe Dgien and Van Pelt all made quick work of the field to move up into the top five by a lap 12 caution.

Unfortunately for Cartwright, that lap 12 caution was for his No. 2b which slowed while leading, exiting the second corner. Van Pelt assumed the lead after Cartwright’s misfortune, but he would have to contend with Pennsylvania’s Alan Rudalavage who made the tow to Woodhull Saturday and was loaded for bear.


Curt Van Pelt started fifth, had to go to the back after an on-track incident and would race his was back into the top 5 in the Wally Wade-owned No. 84 before race’s end. The other big charger of the race was Corning, NY’s Cory Costa. The defending winner of the Bullring Challenge rolled off 21st on the grid and found himself well into the top five by races end.

Rudalavage could close the gap late in the going on Van Pelt, but Van Pelt always seemed to catch slower traffic at the perfect time to not lose a lot of momentum. Not even a late race restart could keep the Westfield, PA pilot from nailing down his first victory of 2018.

“Everyone was missing the bottom on that one restart and I got a good shot,” said Van Pelt of the work it took to advance from 11th to the top three positions.

After losing a motor during the track’s open practice session a couple weeks back, Van Pelt was quick to mention his crew and motor builder for getting their ride back on track.

“After throwing a rod on our good motor on practice day, I was really happy with this Morgantini motor. Really have to thank the crew and Kevin and Martin, Shannon, Larry and my dad. I was quite surprised at how tight it was, but it just made work harder to get it done.”

It took Connor Brown nearly a decade, but he finally slayed the dragon at Woodhull on Saturday night at “New York’s Toughest Bullring in the NAPA Crate Sportsman division. Brown, who probably felt like the Woodhull red clay owed him one after circumstances stole his first victory away in 2017, held off an impressive run by Jerry Aldrich to claim his first career Sportsman win.

Brown and Aldrich led the field to the green flag, but it wasn’t a start on the pole and just cruise away kind of race for the driver of the U.S. Army and U.S. Marine Corps tribute car. Brown had to contend with Jerry Aldrich, Stacey Jackson and Kenny Peoples Jr. all race long to keep the top spot.

With several cautions sprinkled throughout the race event, Brown had to survive Woodhull’s new Delaware Double File restart format all race long (even past half way). Aldrich kept pace on the bottom lane in row two for each restart, while Peoples was just too loose on entry to really make a hard run at Aldrich for second place.

In the end, Brown would fend off former Rookie of the Year Aldrich who made it interesting on the final lap. Brown was nearly speechless as it was an emotional victory lane, as Brown and team celebrated his first career victory.

“I can’t even talk right now- I’ve been racing in this class for almost eight years now and I’ve gotten so close so many times,” said an emotional Brown. “I’ve never been able to do this.”

Out of the restarts that Brown had to survive, it was the final one that he thought had sunk his chances for winning.

Steve LeBarron picked up right where he left off in 2017 winning the SWL Awards Crate Late Models track championship and taking the opening night win Saturday night. LeBarron utilized the outside lane of the track to perfection, mixed in with some real hairy moments on the top of turns three and four to cruise to victory on opening night.

The great battle of the race took place between Jason Knowles and Darin Horton. Knowles, fresh off a four-race stint down South with a Crate Late Model traveling series, had all he could handle trying to fight off the advances of sophomore driver Horton in the Stan and Pam Krise-owned No. 66.

Horton appeared to be the fastest car on the track with less than ten laps to go and had he been able to get second away from Knowles could have had something for LeBarron. But the battle was great for second and Knowles was able to maintain that position until the double-checkered flags.

LeBarron would collect his first win of the season in defense of his title.

“Track was nice and smooth, the top was there but it was tough,” said LeBarron in Instant Heat Wood Pellets Victory Lane.

Dylan Cecce is off to a great start in 2018, as he walked away with the opening round of the Joe Willcox Performance Automatics Street Stocks season at Woodhull. Cecce was lucky enough to draw the pole position for the 20-lap feature go, with Tracy Dunn starting alongside.

Dunn would hold on to the second spot throughout the event, but not without a hell of a fight from the pride and joy of South Canisteo- Brett “The Jet” Marlatt. Marlatt fought Dunn through slower traffic in the late stages of the race, as Cecce had jumped out to a full straightaway advantage.

“This car is awesome, this is two races in a row and we won five at the end of the year last year,” said Cecce in Victory Lane. “We thought we were good last year, but Dylan made some changes in the winter and we think it’s going to be even faster when this place dries out.”

The biggest surprise of the night came in the Woodhull Auto Supply Hobby Stock division, as a new record of twelve cars made the trip to tackle the High Banks on Saturday night. Defending track champion Carter Dennis was hoping to start his defense of his title with a win on opening night. But an incident during the 20-lap feature put him outside the top five, however he would recover for a top five finish.

The story of the night in the Hobby Stocks though was Teddy Morseman. Morseman was filling in for his injured son Dylon who take a nasty spill on his bike earlier in the week and broke his shoulder. Dylon will be out for up to 8 weeks, so dad decided to take the car out and shake it down to get all the bugs worked out.

It did all of that. Morseman battled early and often with Joe Birdsall for the lead. Birdsall would have problems of his own and wouldn’t get the finish he had earned up to that point. Morseman would be the class of the field on this night, to seal up a win for his healing and injured son.

Jason Ketrow got a gift from Chris Woodard and Ray Hyer in the Daugherty’s Auto Sales & Service Mini Stock feature. Ketrow had a very strong car all night long, including winning his heat race. But come feature time- Woodard and Hyer were the class of the field.

Woodard led the race from the drop of the green flag from his pole starting position, with Hyer advancing from starting position number six to second place prior to half way. The pair put on a duel for the lead in the closing laps with Woodard running low and Hyer running the outside of the track. As the pair took the white flag and entered the first turn, Woodard checked up to enter corner and the two made contact sending Woodard spinning toward the infield.

The caution was displayed and Woodard and Hyer both were forced to restart from the tail of the field on the restart. Ketrow would get the top spot for the restart and held off all challenges from Adam Austin who made his racing return in a new car to finish in the second position. Rick Amidon in a brand new piece, Derrick Puryear and Rookie of the Year contender Anthony Gullo rounded out the top five.

Codie Baker picked up where he left off at Woodhull last season, after winning his first track title there, to pick up the opening night victory for 2018. Baker won the Bear’s Auto Body Front Wheel Drive feature after starting on the outside pole, next to teammate Nick Brown in the No. 14x.

Baker got a great challenge from past champion Adam DelGrosso in the final few laps, as DelGrosso advanced from his eleventh starting spot to break into the runner up spot with a handful of laps remaining. DelGrosso caught a late caution to pull up to the back bumper of Baker for a late race restart but Baker was just too strong on the outside lane for anyone to make the race-winning pass.

Carter Crooker swept the heat and feature race in the Daugherty’s Auto Sales & Service Warrior division, as the youngster starts his quest for a track title in a brand new piece. Crooker will share his ride with Chris Woodard in the Mini Stock division, as the pair searches for a double points championship with the same ride.

Brooke McClain proved she was back and ready to mix it up once more with the Warrior veterans, claiming a solid second place finish in her No. 3B. Brody Amidon was feeling out a brand new racecar but brought the No. 2 home with a solid third place finish. Ronnie Dailey brought the No. 76 home in fourth place, while Tierney White had some problems on her No. 86 and would not finish the event in fifth place.

Next Saturday night at “New York’s Toughest Bullring,” KB Graphics and Wraps as well as Kickin’ Country 105.3FM will present the action. The night’s activities will include a 30-lap Crate Late Model feature, a Bed Sheet Banner Content and a ‘revenge draw’ for the NAPA Crate Sportsman as all divisions will for one more week follow a draw/redraw format for qualifying.