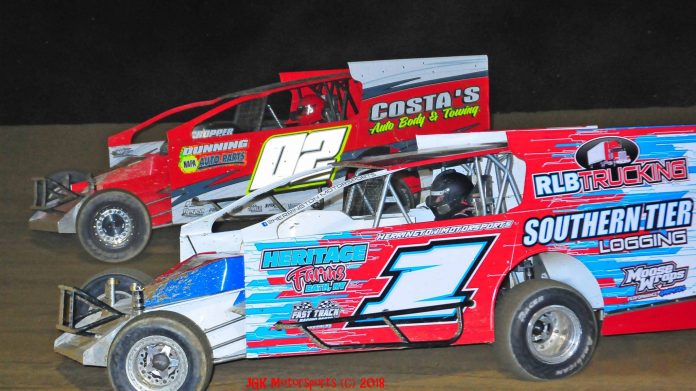 WOODHULL, NY – A beautiful day in the Twin Tiers led to a massive crowd at Woodhull Raceway on Saturday night.  Local racer Cory Costa proved that last year’s Bullring Challenge victory was no fluke- as he held off all challengers to win on KB Graphics and Kickin’ Country 105.3FM Night.

Costa started fourth in the lineup and was battling early race leader Art Goodier by lap three.  An early race restart and a well handling car in the lower groove gave Costa the advantage in his HigFab Chassis, Costa’s Auto Body and Towing No. 02.

The Corning, NY pilot fended off challenges from Dayton Brewer, Billy Van Pelt and Goodier on a one-lap restart to win his first on the High Banks in 2018.  Costa mastered “New York’s Toughest Bullring” Saturday night, but said he never really felt any pressure from the competitors behind him.


“I didn’t even know (Van Pelt) was there,” said Costa in Instant Heat Wood Pellets Victory Lane.  “We’ve always been pretty good over here and I’m really glad to be back here this year.  I thank Ted for changing things up and getting a different mix of drivers in here.”

The NAPA Crate Sportsman feature race was fairly rough and tumble for the 25 scheduled laps for their feature event.  Jake Dgien parked the No. 3 in victory lane to make it a HigFab Chassis sweep on this night at Woodhull.

Dgien battled early race leader AJ Costley for the lead, until Costley spun in front of the field.  The spin ended what Costley thought was going to be the run to end his 2018 bad luck streak.

Brett Buono was involved in an early race caution and had to go to the back.  But Buono had the Minions on the side of his car working double time, as Buono clawed his way to the front in the 64b.  Buono was eating up Dgien on corner entry, but Dgien was better on corner exit- which was the difference in deciding the victor in this race.

“The car came alive in the feature tonight,” said Dgien.  “I’ve been out of town working all week, I want to thank Jack for doing all the work on this car.  I just helped him wash it Sunday morning.”

Jason Knowles took the SWL Awards Crate Late Model division to the woodshed on Saturday night.  Knowles made it a Woodhull/Outlaw sweep as he completed the feat in the $800-to-win special event held Saturday night.  A regular on the traveling circuit, Saturday’s win only found Knowles having to travel ten minutes up the road.

In an event that saw Cecce out to a half a track advantage, the driver of the Showtime Motorsports Potter Chassis No. 7 ran away and hid for his second-straight victory of 2018.  It also earned him a starting spot of no better than position number 12 next week, as the track’s handicap system will take effect.  Something that might just turn the boo birds into cheers next weekend.

“I would be booing up there too, we’re stinking up the show,” laughed Cecce in Instant Heat Wood Pellets Victory Lane.

Morseman found himself in a spirited battle with Joe Birdsall to get the win.  Birdsall gave Morseman everything he could handle, including a few honks of the chrome horn trying to find a way by.  The driver of the No. 63 offered his congratulations in Victory Lane, with Morseman chalking it up to good hard racing.

Adam Austin had himself a weekend in the Daugherty Auto Sales & Service Mini Stocks.  Austin won the 4-Cylinder feature in Dundee Friday night, before coming back to Woodhull for his second race of the season on the High Banks.  Austin is making his return to racing after a seven-year layoff.  One of those years in fact, a season where he was the head wrench on the car that won the Mini Stock title at Woodhull.

Who do you think he had to battle to get the win at Woodhull on Saturday?  If you guessed two-time and defending Mini Stock champion Chris Woodard- you would be correct.

Austin and Woodard put on one of the best shows of the night, battling for every inch on the track trying to manage to get ahead of the other.  Austin was driving very aggressively on the outside, while Woodard was shutting down early and trying to pedal hard on the bottom lane.

Not even a lap car on the final lap, who essentially forced Austin to make the decision to drop all four tires off the backstretch banking to make the pass, in order to keep pace with Woodard.  Austin beat out Woodard in the dash to the checkered flag, completing the weekend sweep.

Speaking of good stories, Adam DelGrosso wrote a story of his own winning the Bear’s Auto Body Front Wheel Drives.  DelGrosso took away Codie Baker’s preferred line on the high side to hold off his teammate to get the victory.

It was the first checkered flag for DelGrosso since getting injured and missing half the season in 2017 due to that back injury.  Baker tried high, tried low and had to settle for second on this night, one that seemed to be a race to get to the front with whoever got there first being the car that could hold off all challengers.

Carter Crooker held a pretty wheel all race long in the 10-lap Daugherty Auto Sales & Service Warriors feature.  Crooker made it a heat/feature sweep for the second week in a row.  Brooke McClain was pretty fast in her No. 3B as well, notching her second straight runner up finish as well.

Next Saturday night at “New York’s Toughest Bullring,” Williams Construction & Spray Foam present the Patriot Sprint Tour 360 sprint cars.  The night’s activities will include a full card of racing except for the Hobby Stocks and Warriors.