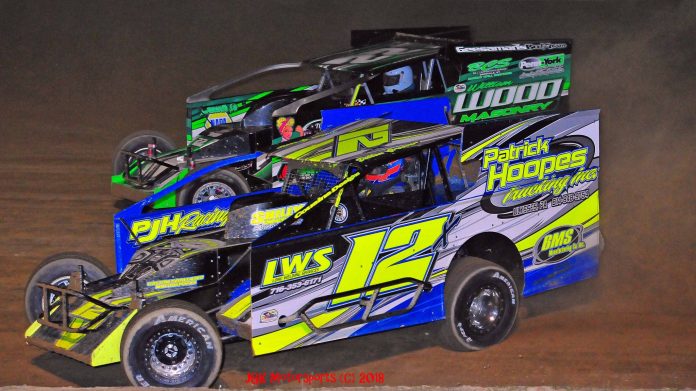 WOODHULL, NY – Brady Fultz came as close as you can come to winning an Insinger Performance Modified feature at Woodhull on Saturday night. Fultz led lap 24 for three-quarters of a lap, but it was the final drag race off turn four that he didn’t lead- that would lead to a disappointing night.

A young gun who just recently turned 19, Dillon Groover, found something upstairs on Ted White’s third-mile Woodhull Raceway and powered by Fultz to take his first win of 2018. It was a race that took many twists and turns, but ultimately came down to three of the track’s younger rising stars who would settle it out for the win.

One of those twists came on lap eleven when the engine let go on Billy Van Pelt’s No. 2 Bicknell. A stream of blue smoke was visualized for several laps before it let go, but a caution flag exacerbated the problem when Van Pelt backed out of the gas. It was the third expired engine for nineteen-time champion in six weeks of racing and a practice session.

Dundee, N.Y.’s Brady Fultz led early in the 25-lap event but as the laps clicked off, he would start getting a great challenge from Rookie of the Year candidate Dayton Brewer. Brewer was digging on the bottom, while Fultz was running a great pace right through the middle in his Troyer Racecars, Barney Moravec Water Wells No. 70.

But while Brewer and Fultz battled for the lead, Groover was quickly closing the gap and stalking for his opportunity to strike. That opportunity came with three laps to go when Fultz appeared to get a little loose, causing Brewer to check up in turn four. Brewer’s broken momentum was all Groover needed to sweep by to take over second and set his sights on Fultz.

But it wasn’t a cakewalk either. Groover jumped the outside edge in turn one which almost ended his bid for the lead. But a perfect lap of running the cushion on the white flag lap put Groover in position. Fultz was committed to the middle and nearly squeaked out the win at the line, but Groover’s momentum carried him around Fultz for the win by a mere foot and a half.

The Woodhull crowd stood and roared over the sound of the engines, with the finish that was put on for the win on Patrick Hoopes Trucking Night. A business quite familiar with Groover, as they field the two-car team that Groover joined starting this season.

“The bottom went away tonight and the top was sure there when we needed it,” said Groover. “This small block has been very faithful to us and when it’s slick like this, it sure shines. That kind of move, you can’t really plan, it just happens.”

A full report from the Super Gen Products/Champion Power Equipment CRSA feature can be found at crsa.myracepass.com

Young Ajay Potrzebowski Jr. was less than a handful of laps away from getting his first career NAPA Crate Sportsman victory Saturday night. But just as was seen in the Modified feature, the bottom went away and the top side was king in the closing laps.

Stacey Jackson would find the outside lane with less than 10 laps to go and escape contact with another competitor to find himself in a position to snatch the win from the young gun. Jackson powered around the outside with a handful of laps remaining to score his second feature win of 2018 at New York’s Toughest Bullring.

Stevie Hartman III would also get by Potrzebowski in a close race at the end to finish second, while Brett Buono and Bobby Peoples rounded out the top five.

John Waters has made two appearances at Woodhull Raceway in 2018 and following Saturday night, he’s a perfect two-for-two. Waters made quick work of a poor handicap starting spot in the 20-lap SWL Awards and Photos Crate Late Models, getting by Darin Horton as well as Jason McGregor to take the lead.

Waters made up for a rough night at Genesee Speedway on Thursday, with his team putting in extra time to have the car ready for the rest of the weekend events. Those events including Saturday at Woodhull which was for a posted $1,000-to-win as well as a touring race Sunday.

Jason McGregor brought home a solid second place finish over Darin Horton who made a lot of moves on the outside lane, showing his continued improvement in the Krise family-owned No. 66. Jason Knowles in a borrowed ride finished fourth while Kurt Stebbins brought the No. 26 home fifth.

It had been a winless drought that spanned decades for Dan Gardner. But on one Saturday night in early June, Gardner finally got the gorilla off his back and brought Uncle Butch’s No. 62 to Instant Heat Wood Pellets Victory Lane for career win No. 1. Gardner used to race the No. 15 in his early racing days, but took on his Uncle Butch’s No. 62 when he returned to racing in 2016 in the Joe Willcox Performance Automatics Street Stocks.

Gardner has had just terrible luck in the early part of the season, but in the last three weeks in particular. That set Gardner up on the pole for the 20-lap feature, a spot Gardner would only relinquish for one lap throughout the course of the event.

When Brett Marlatt and Dylan Cecce got tangled up and spun in turn one, Kurt Stebbins saw an opening to try and spoil the Gardner team’s fun. Stebbins rode the outside lane like Groover had done in the Modifieds, but on several occasions got over the fine line that was present on both ends of the track as there wasn’t a big cushion to speak of.

Stebbins was on his way to taking over the top spot late in the going, but caution flags on laps 16 and 18 gave the lead back to Gardner by going to the last completed lap. On the final restart, Gardner got a great jump and gave himself just enough room to hold off the last lap charge by Stebbins. Stebbins needed that full two laps to get the No. 26 whipped up fast enough to make a run, with Gardner there off the bottom to shut the door at the checkered flag.

Chris Woodard made it a four-peat in the Daugherty’s Auto Sales & Service Mini Stocks. Woodard fended off Ray Hyer during the race to get the victory. It was Woodard’s fourth race win in a row and fourth victory in six attempts in 2018.

Codie Baker would deny Adam DelGrosso three wins in a row in the Bear’s Auto Body Front Wheel Drives. Baker had to contend with DelGrosso and Scott Lehman Jr.’s No. 6xjr. Baker got his second win of the season and chopped four points off his teammate DelGrosso’s point lead.

Next Saturday night at “New York’s Toughest Bullring,” Troupscreek Auto Parts will present the 2018 King of the Ring Crate Late Model event. It will feature a complete show of all divisions as well as Woodhull’s second Power Wheels race of 2018 for ages 5 and under and ages 6 to 10.