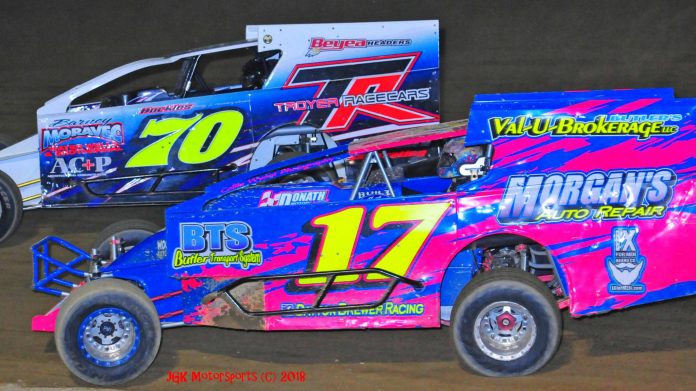 WOODHULL, NY – Dayton Brewer showed a lot of promise in 2017, when the youngster made less than a handful of starts in a Modified in preparation for his rookie campaign in 2018. A podium finish in the season-ending Bullring Challenge was evidence that this ‘rookie’ wasn’t going to be any ordinary rookie.

Brewer started his racing career like so many have the race at “New York’s Toughest Bullring” by honing his skills at Moe’s Karting World in the go-karts. He would then move on to the NAPA Crate Sportsman division, where his father won a track championship, and he continued his climb to the top by winning races in the process.

But Saturday night took Brewer’s career to new heights- Instant Heat Wood Pellets Victory Lane in a Modified race at Woodhull. He would have to run the last 10 laps of his life to fend off challenges from a hard-charging Cory Costa. But Brewer would do exactly what he needed to do to seal the victory.

Brewer started in the ninth position, while Mike Bills led the race from the drop of the green. Bills would get a flat right rear tire while leading on lap 5, handing the lead over to Josh Keesey’s No. 4 Campbell Building Supply ride.

While Keesey led, Brewer was railing the top side to perfection- passing several cars a lap. Costa also found the top lane from his sixth starting spot after Brewer sailed by, and the pair would run in each other’s tire tracks as they caught Keesey.

Keesey was aggressively running the outside in turns three and four and the Woodhull Bull jumped out and bit the 4 car with just nine laps remaining. This handed an opportunity to Brewer to snag his first career victory since jumping into the Modified ranks.

Brewer would make good on the opportunity in getting career win No. 1 over Costa, Billy Van Pelt, Ron Cartwright and Art Goodier.

“(The car) worked perfect tonight,” said Brewer. “High, low, wherever I needed to put it. I can’t thank Craig and Theresa and Cindy as they’ve been putting so much time into the setup of this thing.”

Brewer tried to read the track, based on some grooming the track crew did last week that mirrored what they had done this week during intermission.

“I saw the move Groover made last weekend to get the win. They watered the track again so I knew it would be good and it seemed to work pretty well. This is definitely pretty cool, I was a little more emotional on the cool down lap than I thought I would be.”

Costa had nothing but positive things to say about the Modified rookie in a second place effort.

“Dayton is a hell of kid, he really deserves this win. He works just as hard as anyone else out here. We didn’t have anything for him tonight, I tried high and low.”

Billy Van Pelt echoed those comments, as we watched in awe of how Brewer made quick work getting to the front.

“Congratulation to Brewer tonight on an awesome job. He started right next to me and I saw him go right to the front. I sat in the car saying ‘wow look at him go.’ We just missed it tonight but third tonight and a second and a win at Freedom last night was a good weekend for us.”

AJ Costley finally buried the bad luck bug that had been eating him alive so far in 2018, with his first win of the year in the NAPA Crate Sportsman division. Costley battled early with teammate Bob Butcher in the No. 99, but Costley’s Ridge Runner Café No. 40 was not going to be denied.

Costley started fourth while Butcher started on the pole for the 25-lap feature. It appeared for a time that Costley would have to contend with Kenny Peoples Jr., who clawed his way from tenth to second with ten laps remaining. But it looked as though the tires went away late for Peoples, who then had to contend with Stacey Jackson for the runner up position.

Costley pulled away late to snag his first of 2018 over Peoples, Jackson, Brandon Butler and a late arrival Jake Dgien. Dgien was late arriving after a long work week out of town, but made it in time to start scratch in the feature and made a great recovery for a top five.

“This thing was on a rail,” said Costley. “We’ve been working on this car for two years to get it to work like this and I think we finally got it where we want it. We were battling for the lead there for a little while and then I saw Kenny Jr. come up there and realized we were in really good company.”

Jason McGregor was due for a win in the SWL Awards Crate Late Models. Two second place finishes in a row had McGregor poised for another good run to try and get just one spot higher in the final rundown.

But to get that win, he had to survive one of the best Late Model races in recent history at Woodhull Raceway. Wayne Robertson, John Waters and Kurt Stebbins put on a battle for the ages trying to wrestle the top spot away from McGregor. The last ten laps were probably some of the hardest laps McGregor has ever had to drive.

Robertson and Waters exchanged slidejobs and crossover moves as they raced hard for second right behind the leader McGregor. That battle allowed Kurt Stebbins to creep up on the leaders at the end to make it a four car battle. But the harder they raced, the more McGregor could hit his marks and put second on back at arm’s reach.

McGregor held off the likes of Robertson, Waters and Stebbins to get his first win of 2018 in the No. 67g. Waters in a different car than what he won with the previous week was second, Robertson third, Stebbins fourth and defending track champion Steve LeBarron in fifth.

Dylan Cecce had to utilize a line that typically hasn’t been used in the past to get by race leader Tracy Dunn to win the 20-lap Joe Willcox Performance Automatics Street Stock feature. Cecce worked the middle lane in turns 1 and 2 to get by Dunn with just a handful of laps remaining.

Cecce started ninth and quietly picked his way to the front of the pack. Dunn appeared that he had the car to beat, running the low lane to perfection. But Cecce started moving around and found a line in the middle groove that planted the right side tires and gave him the traction he needed to scoot by the leader in the No. 21 machine.

Dunn battled hard with Brett Marlatt for second on the last lap, with Marlatt getting that spot and Dunn going for a spin in turn three on the final circuit. Dan Gardner, Jeredd Dennis and Brett Crawford filled out the top five.

The Hobby Stock feature saw a first-time winner in his career, as AJ Niedermaier took the sharp-looking 1974 Dodge Charger to Victory Lane in the Woodhull Auto Supply Hobby Stocks. Les Smith and his mid 60’s Malibu appeared that he would finally grace Victory Lane, but Niedermaier made the bottom groove work off turn two to get by for the lead and the win.

Smith was working the outside line very well and kept his momentum up on corner exits. Niedermaier would capitalize on one small slip up that Smith made in turn one just past the halfway mark. Brent Williams struggled on Saturday night and would pick up the Hard Luck Award for $50, which Smith has organized to make happen for the next several weeks. Williams will be presented with the award this weekend.

Ray Hyer started ninth and Chris Woodard started twelfth in the Daugherty’s Auto Sales & Service Mini Stock feature race. It wouldn’t take long for both of those cars to make their way to the front and put on one of the best races in recent memory in the division.

Hyer worked the extreme outside and Woodard ran the ditch on the bottom lane, racing side by side for the entire second half of the race. When one driver got an advantage on one lap, the other driver got the advantage on the next lap. The two were side by side at the white flag and approached slower traffic that would play a factor.

Woodard, now known as the “Street Sweeper,” got the best break in traffic to beat Hyer back to the line for win number five in a row. Hyer, Jason Ketrow, Kane Stebbins and Adam Austin completed the top five.

Ryan Austin appeared to be on his way to another Bear’s Auto Body Front Wheel Drives 2018 victory on Saturday night. He led the field by half a track on lap 18 before the first and only caution flag of the event was displayed. Austin would have Adam DelGrosso and Codie Baker on his tail for the restart for a green-white-checkered finish, but it would not end that way.

Baker snuck by DelGrosso for second and looked that he would finish there. But Austin got tanlged up on the cushion in turn four in the final turn of lap 19 and could only watch Baker drive underneath him to steal the win. Baker got the surprising victory over DelGrosso, Matt Prescott, Scott Lehman Jr. and Nate Freeland.

Carter Crooker went from eighth to first on lap number one to walk away with the Daugherty Auto Sales & Service Warriors feature event. Though Crooker walked away for another win in his dream season, the best battle on track was between Ronnie Dailey and Brooke McClain.

A spirited battle between the No. 76 and No. 3B ended with Dailey claiming the runner up spot over McClain, Brody Amidon and Garrett Wilson.

Next Saturday night at “New York’s Toughest Bullring,” Universal Plant Services and Williams Construction and Sprayfoam will present the “Ultimate Patriots Tribute.” The Patriot Sprint Tour will return on FREE Veteran and Armed Forces Night, with veterans and Armed Forces members receiving FREE admission with military ID. The PST Sprints will join the Modifieds, Crate Sportsman, Street Stocks, Hobby Stocks, Mini Stocks and Front Wheel Drives for a 6:30pm start. The Crate Late Models and Warriors will have the night off.