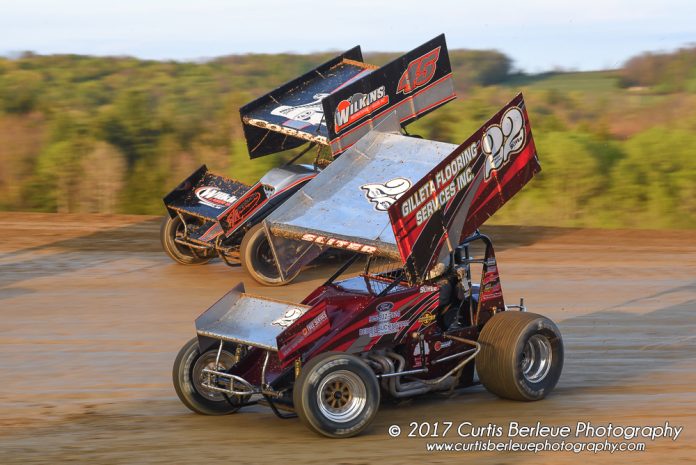 SODUS, NY – After a successful trip south to the state of Pennsylvania last weekend, the A-Verdi Storage Containers Patriot Sprint Tour continues full steam ahead this week with a trip to ‘New Yorks Toughest Bullring’ Woodhull Raceway. The evening has been dubbed the ‘Ultimate Patriots Tribute Night’ as the track also pays respect to both veterans and active duty military.

For the first time in five seasons, the tour visited Clinton County Motor Speedway last Friday and saw Chuck Hebing continue his dominance in 2018 by landing in victory lane for the third time thus far. Young gun Paulie Colagiovanni came home in second, followed by Davie Franek, Jared Zimbardi and Coleman Gulick to round out the top five.

The following night saw the 15th annual Joe Whitcomb Memorial go to Selinsgrove Speedway regular Chad Layton, his first victory at the Snyder County fairgrounds since 2006. With a unique format on tap, single lap time trials were held and track regular Mallie Shuster earned quick time with a lap of 17.424 seconds. The highest tour regular in time trials was Jordan Thomas (third quick) with a time of 17.547.

The points battle tightened up slightly after Saturday night’s action, though the ‘Cobra’ Chuck Hebing still leads with 835 points over Jordan Thomas (762) and Paulie Colagiovanni (753).

Moving ahead to this weekend, the ‘Ultimate Patriots Tribute Night’ at Woodhull Raceway will be the make-up event for the originally scheduled for May 12th appearance that was washed out due to rain and cold temperatures. The evening will feature free admission to veterans and active duty military members (with ID) and heat races will get under way at 6:30pm sharp.

For more information on this weekends event at Woodhull Raceway, be sure to visit www.WoodhullRaceway.com and www.PatriotSprintTour.com, along with ‘liking’ the Patriot Sprint Tour on Facebook and following @PatriotSprints on Twitter and Instagram. 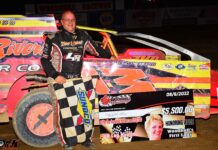