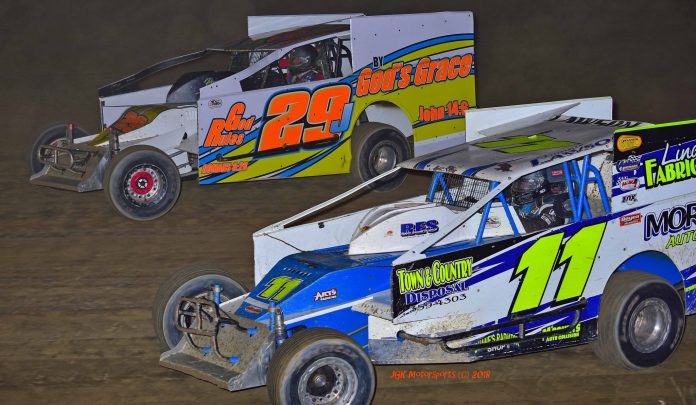 WOODHULL, NY – Donnie Lawson just couldn’t find the words on Saturday to express how much his first victory of 2018 meant to him. Lawson took the Insinger Performance Modified field at Woodhull to the woodshed over the course of the 25-lap feature event.

Lawson had experienced a dreadful previous three weeks, with the three-week handicap score finding Lawson on the pole for the feature race. The driver out of Woodhull, in the RLB Trucking, Woodhull Auto Supply, Morgan’s Auto Repair No. 11 led wire to wire to pick up the victory.

Behind Lawson, the battle for position was fierce. 19-time track champion Billy Van Pelt was clawing his way to the front to try and get a run on Lawson for the lead. Lawson was glued to the bottom, being his preferred line week to week.

Van Pelt was trying to ride the cushion but that cushion was a little choppy to try and maintain consistency lap in and lap out. As Van Pelt would close the gap, Lawson would hit a perfect line down low and the veteran would graze over the top of the cushion into the rough stuff.

The emotion overflowed in Victory Lane afterwards, as Lawson and his father Don celebrated both of their personal victories. Donnie’s win on the Steuben County clay and Don’s incredible recovery from offseason medical struggles.

“This has been a bad year,” said Lawson trying to hold back the emotions of the win. “I have to thank my dad and my family.”

The 270 Micro Sprint invasion was also on the card for their 20-lap feature event, promoted and organized by local micro sprint fanatic Donnie DuVall. Quinn Roberts took a year off from Victory Lane at Woodhull in 2017, but got right back into the swing of it with the victory on Saturday night.

Roberts raced from position number three and battled with Brian Marriot and Brian Boraweic for the lead throughout the event. Marriot led early from the pole after winning the $100-to-win Dash for Cash to earn that first starting spot.

After taking the victory, Roberts greeted the Woodhull fans with the Micro Wing Dance.

“This place is like running a four wheeler in wet grass,” said Roberts. “It’s tough to get ahold of, but that’s what makes it fun. This place is our superspeedway, it’s not like anywhere else we go and is the best show around.”

Peoples would take the lead on the outside from Rookie Cole Youse, who put in his best performance of the season on Saturday night. Youse took the Dave’s Custom Logging, Pizza N Stuff Bicknell from the pole position and led the first half of the race. But just shy of halfway, Peoples took it to the top shelf and made his way by off turn four to grab the lead.

Meanwhile, Dgien was tied up in an absolutely dog fight trying to work his way toward the front. Late in the race where Peoples and Dgien were running, the points lead would have been down to a single point. But Dgien got his elbows up and started clawing his way into the top five, then the top three and then up to second.

Dgien wouldn’t win the battle, but he surely helped his case in trying to win the war in the final two weeks for the title. Peoples and Dgien aren’t the best of friends at the track, which is going to set up two final point races that the fans won’t want to miss.

Afterwards, Peoples was thankful to get the speed back in the car that they seemed to have lost last weekend.

“Last week we had some electrical problems and a tire gauge that went bad- we’re still digging,” said Peoples. “(Youse) is one of the rookies that I can race with side by side and I can trust him”

The SWL Awards and Photos Crate Late Models also see a close point battle on their hands. Jason Knowles secured the victory in the 20-lap feature on Saturday night, allowing him to regain the point lead with two races remaining.

Defending track champion Steve LeBarron gained a point in the heat races, but was just a tick off in the feature. His few point advantage turned into a few point deficit after the checkered flag flew from Tony Van Pelt.

Brett Marlatt led early and often to take the victory in the Joe Willcox Performance Automatics Street Stock feature. Marlatt was able to fend off point leader Dylan Cecce late in the going to capture his second points win and third win overall at Woodhull in 2018.

Marlatt started third and took it three-wide on “The Weather Man” Jim Weatherley and Mick “The Quick” Seeley to lead on lap one. Ceece closed the gap late, but Marlatt ran the Donnie Lawson lane late to keep the advantage all the way to the checkered flag.

Branden Morseman duked it out with Kurt Stebbins to win the 2nd Annual Street Stock King of the Ring. A press release is forthcoming following that event.

Another week in the Woodhull Auto Supply Hobby Stocks, another AJ Niedermaier victory and another week of Carter Dennis trimming into point leader Joe Birdsall’s lead. Dennis finished second while Birdsall scored a DNF for the second-straight race.

Niedermaier took his Dodge Charger to Victory Lane for the third time this season, also winning his second race in the last three races. Niedermaier will look to make it three out four in front of the Woodhull Legends Night crowd.

Chris Woodard had another Daugherty’s Auto Sales & Service Mini Stock victory snatched from his grasp late in the going. Last week it was a broke piston, this week it was contact from Ray Hyer’s front bumper. Hyer admitted fault after the race in which he was black flagged, but that wouldn’t be much consolation for Woodard.

The man that was at the right place at the right time was Adam Austin. Austin, who had to hold off a fierce charge from Jason Ketrow in the waning laps, would collect his third win of 2018 at Woodhull. Austin admitted post-race that his team didn’t have a winning car, but had just the right amount of luck to get the win.

Codie Baker for the sixth time in 2018, took the checkered flag in the Bear’s Auto Body Front Wheel Drives. Baker passed early race leader Adam DelGrosso on the outside exiting turn four to take the lead on lap seven and never looked back to score the win.

The win was an important one, as Baker now takes the point lead away from DelGrosso with just two races remaining. For the third-straight season, the Front Wheel Drive championship is looking as though it will come down to a single point to decide the champion.

After a two-race hiatus, Carter Crooker emerged victorious once again in the Daugherty’s Auto Sales & Service Warriors. Crooker led Ronnie Dailey, Brody Amidon, Josh Isaman and Brooke McClain across the line. Dailey recovered from having to make repairs under a yellow to finish second, and was chopping down Crooker’s lead at the end.