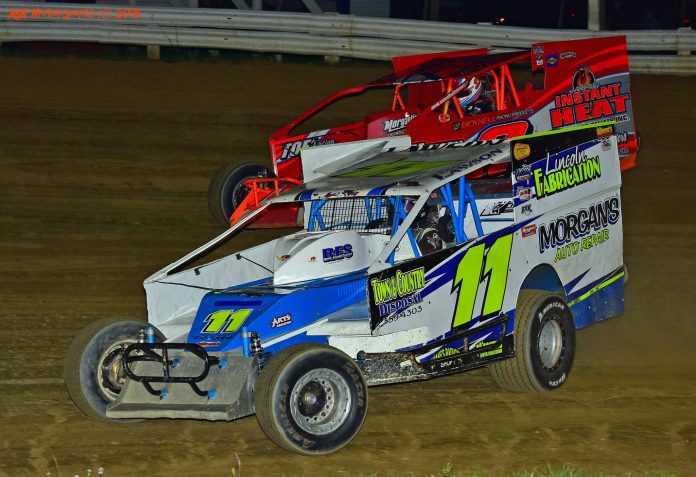 WOODHULL, NY – Donnie Lawson said in an interview earlier this week that his team went ‘back to basics’ in their dominant performance to win his first of 2018 last weekend. A back to basics approach and a bad fast racecar powered the Woodhull, NY native to two feature wins in a row.

Lawson drove through the field from his seventh place starting position and also capitalized on a mechanical issue for Russell Morseman. The chassis and motor combo that Lawson refers to as ‘old faithful’ helped him not only win two-straight races, but also allowed the No. 11 team to crack back into the top five in Insinger Performance Modified points.

The Cobra’ Chuck Hebing was the dominant force at Woodhull on Saturday night, taking the victory in the Patriot Sprint Tour 25-lap A-Main. A huge crowd was on hand to witness history on ‘Legends Night’ as the self-proclaimed ‘gray-haired veteran’ secured his 50th PST victory with the win.

“Woodhull has been real good to me over the years” commented Hebing. “We got it rolling tonight, it got a little hard to get by the lap cars with the dust but it was a good night over all with a lot of the Wilkins Family here and boy what a crowd tonight!”

It’s also been a tough season for Tim Guild, who picked up the victory in the NAPA Crate Sportsman division Saturday night. Guild, who hadn’t scored a top five since June 30 when he won the race, would finally break the bad luck streak to score the victory.

But to get the win, he had to race hard with sophomore competitor Ajay Potrzebowski Jr. Potrzebowski logged his best ever effort in the Moe’s Southwest Grill, CoreLife Eatery, AMP General Contracting No. 72 to finish in the runner up position.

Guild scored the win in his Ohio Logistics No. 06- a big deal to his team and sponsors as representatives from Ohio Logistics and Southern Tier Logistics were in the house to celebrate the win. Stevie Hartman, point leader Jake Dgien and a rare appearance by Dale Welty filled out the top five.

After the race was completed, a driver competing in Saturday’s feature claimed the motor of Kenny Peoples Jr. Adam Taft and his No. 20h team fulfilled all of the requirements to be able to submit a motor claim and will no longer be able to claim a motor during the 2018 season.

The last several weeks for Jason McGregor has truly been sink or swim in the SWL Awards Crate Late Models. McGregor in the last two races had one finish just outside the top 10 and one just inside the top 10. But Saturday night was his second victory of the year and first since June 16.

Jared Hill did everything he had to do in order to win the Joe Willcox Performance Automatics Street Stock feature, except lead off the final set of turns. Hill had his Mopar’s, Beauty Craft Hair Fashions No. 93 on the money all night long, in search of his first Woodhull victory in nine years.

Kurt Stebbins made sure that it would not be meant to be for the invader from Dundee, NY, as Stebbins made a slick move and beat Hill back to the line in the drag race for the win. Hill had to settle for second over Tracy Dunn, Teddy Morseman in a Wesley Rogers No. V05 tribute and 2018 Street Stock track champion Dylan Cecce in fifth.

Cecce clinched his third Woodhull title and second-straight, taking a 43-point lead to Championship Night. An amazing feat, considering Cecce won five out of the first seven races and hasn’t won at Woodhull in two months.

For the fourth straight month in 2018, ‘Mr. Excitement’ Joe Birdsall has won in the Woodhull Auto Supply Hobby Stocks. Birdsall has wins in May, June, July and August and will have a chance to make it five months in a row next weekend on September 1 for Championship Night.

Les Smith looked as though he might get that first victory on Woodhull Legends Night, but it wasn’t meant to be on this night. Birdsall got by for the lead and the win and will carry a 20-point lead into Championship Night. With the average car count for the Hobby Stocks in 2018, this will all but sew up the title for Birdsall who saw runner up Carter Dennis suffer problems on Saturday night.

Chris Woodard finally got back on top in the Daugherty’s Auto Sales & Service Mini Stock division. Woodard hadn’t scored a victory since June 30, as he has suffered it all since then between aggressive driving and mechanical failures. Woodard also locked up his third-straight Mini Stock title, carrying a 57-point lead to the season finale next weekend.

Ryan Austin logged another victory in the Bear’s Auto Body Front Wheel Drives on Saturday. Austin capitalized on a great handicap score to start up front and secure the win in his No. 42 machine.

A solid night for point leader Codie Baker and a bad night for Adam DelGrosso will now see Baker take a 10-point lead to Championship Night. Ten points is a lot to overcome, but certainly isn’t impossible for DelGrosso. Baker is looking for his second-straight and second overall Woodhull championship.

He may have taken two Saturdays off at the beginning of August from Instant Heat Wood Pellets Victory Lane but Carter Crooker is back. Crooker picked up the win in the Daugherty’s Auto Sales & Service Warriors for his ninth victory of 2018 and second-straight to close out the month of August.

Crooker, with a 46-point margin going into Championship Night, has locked up his first Woodhull track championship with the victory. The sophomore Warrior competitor has gone from a developing young shoe, to a dominant force that appears ready to take on future challenges at ‘New York’s Toughest Bullring.’