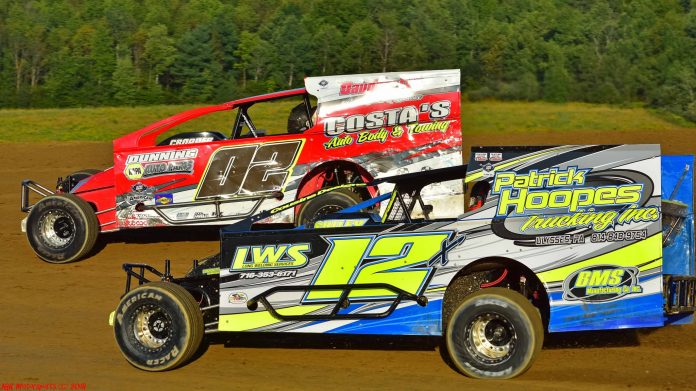 WOODHULL, NY – Championship Night at Woodhull Raceway saw several nail-biting finishes come to a head Saturday night, with 8 track champions crowned and one being crowned a Woodhull champion for the 20th time.

The night started off with the Insinger Performance Modifieds, with the “Hot Shoe” Dillon Groover showing everyone that his team will be a force to be reckoned with for years to come. One night after winning his first feature at Bob Reis’ Freedom Motorsports Park in Delevan, NY, Groover put the pedal down and swept the weekend by winning at Woodhull on Saturday.

But all eyes were on the hellacious points battle between Billy Van Pelt and Cory Costa. In a bit of irony, it was Groover that seemingly blocked Costa’s two opportunities to trim into Van Pelt’s 7-point lead going into the night. Groover beat Costa in the heat race, not allowing Costa to earn maximum heat race points and leaving the lead at 7 going into the 25-lap feature.

Come feature time, Groover got to the front first and dominated the race out front while Costa advanced all the way to the second spot. Van Pelt got to Costa late in the race and the two made heavy contact just before the flagstand, relegating Costa to fourth in the final running order. A two-position post-race penalty was handed down from the race director for the contact under green flag conditions that was felt to be over the line from ‘hard racing.’ Regardless of penalty or no penalty, Van Pelt was already in position to win the championship without attempting to make a pass for second on Costa.

For Van Pelt, the 2018 championship and 20th of his Woodhull Modified career was just one more ‘to do list’ item to cross off his racing bucketlist after also winning at Woodhull on the Short Track Super Series back in August. No other driver at Woodhull has as many championships as Van Pelt in one division.

The NAPA Crate Sportsman division also saw a nail-biter as Jake Dgien looked to hold on to a 7-point lead over Kenny Peoples Jr. for the title. Dgien and Peoples would both find themselves in the same heat race and the two drivers gave fans something to fist pump and cheer for. Peoples stalked Dgien, who was fighting a tight racecar, and would gain a point on Dgien by winning the heat race with Dgien finishing second.

That set up a 6-point gap for the feature event, with Peoples desperately needing a win and Dgien only needing to finish third because he owned the tiebreaker of Top 5’s. Had Peoples won his third to tie Dgien for three wins a piece, the next tiebreaker would have been top fives.

Stevie Hartman III in his backup car No. 15 had other ideas as he wanted to claim the last feature win of 2018. Hartman was the dominant car and stretched the lead once out in front. Nobody had anything for the recent high school graduate, who also had some extra fans in the stands as his family welcomed a pair of foreign exchange students who got to witness their first dirt race on Saturday night.

As for the title contenders, Peoples got all the way to second place and couldn’t get any closer to Hartman once he got there. Dgien kept the No. 5k in his sights and with a top five finish, secured the points championship by just 3 points over Peoples.

The SWL Awards Crate Late Model feature also came down to a razor thin margin, with Steve LeBarron needing to win the race in order to win his second-straight track championship. He would do just that, to beat local racing veteran Jason Knowles who came into the night with a slim 4-point advantage.

A late race caution set up a dramatic restart and finish, as Knowles was right on LeBarron’s bumper for the restart. But LeBarron would not be denied as he hustled the outside lane and ran three perfect laps to secure not only the victory but the track title as well.

A pumped up Branden Morseman stood tall on the roof of his No. 44M after the Joe Willcox Performance Automatics Street Stock division Saturday. Morseman was fast right off the trailer, finished second in his heat and made the right adjustments for the feature to claim his second feature win of 2018.

It has been an up and down season for Morseman with bad luck, but a late season win and being crowned Street Stock King of the Ring was a nice way to finish it off. Morseman was just a whisker faster than Kurt Stebbins and Teddy Morseman, to win by several car lengths.

Dylan Cecce won five out of the first seven point races of 2018, enroute to his second-straight and third overall track championship at Woodhull. A cold streak of no trips to Victory Lane since mid-June led to the Potter Chassis house car securing the championship on pure consistency. Cecce also announced that his car was for sale, if anyone was looking to get into a competitive Street Stock.

It looked as though Les Smith might be in position to capture his first Woodhull Auto Supply Hobby Stock feature win on Saturday, but Greg Young had other thoughts on that. Young led the race early and often and never once had a miscue that would cost him the lead to Smith.

Young worked the cushion to perfection, while Smith worked the low lane smooth and steady in his tribute to Woodhull Legends ride. Smith would fall short again, notching his sixth runner up finish of 2018.

A DNF on Saturday didn’t spoil track champion Joe Birdsall’s champagne celebration in Victory Lane. ‘Mr. Excitement had a mechanical failure in the 20-lap feature go, but had enough of a lead on Carter Dennis to lock up his first Hobby Stock title.

Ray Hyer won the battle in the Daugherty’s Auto Sales & Service Mini Stocks, while Chris Woodard made it three track championships in a row. It looked as though Jason Ketrow might score another victory on the 2018 season, but Hyer had other plans as he railed his car off the cushion and the bumps up top to sweep by for the lead.

Woodard celebrated his third title and first one with the Crooker team and their No. 32 ride. A pairing that wasn’t expected to really happen, bloomed into a partnership that led to a clean sweep of championships for Woodard and Warriors driver Carter Crooker. Woodard will have to contend with Crooker now, as Carter plans to move up to the Mini Stocks starting this coming weekend at the Lyle Sherwood Memorial.

The Bear’s Auto Body Front Wheel Drives saw a classic battle play out between Adam DelGrosso, Codie Baker and Ryan Austin. Had it not been for an untimely yellow flag, Austin may have picked up his second-straight victory. But the yellow flag was timely for DelGrosso who was focusing, at the time, on keeping the Baker No. 14 behind him.

DelGrosso went on to pick up win number five of the year at Woodhull, with Baker finishing third and sewing up his second-straight track championship.

Carter Crooker made it a sweep in the Daugherty’s Auto Sales & Service Warrior youth division. Crooker scored his tenth victory of 2018 and wrapped up his first ever track championship at “New York’s Toughest Bullring.” Crooker ended the year on a streak of three wins and will now look ahead to his time competing with the Mini Stock division, starting this weekend. 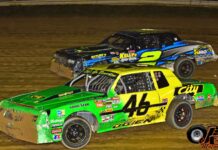