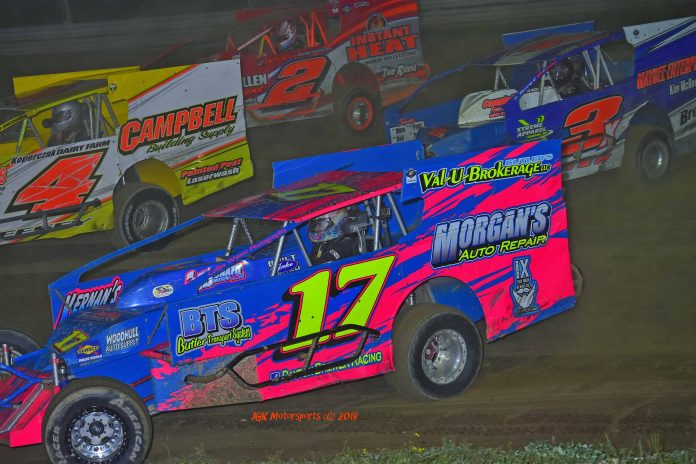 WOODHULL, NY – As the points season has come to a close, Woodhull Raceway is happy to announce their 2018 Rookie of the Year recipients for this season.

The Warrior division, being the Four Cylinder youth class, does not award a Rookie of the Year. All award recipients receive their hardware at the December banquet at Watson Homestead in Painted Post.

Leading off this year’s Rookie class is Insinger Performance Modified driver Dayton Brewer. The Modified Rookie shocked the division veterans with two victories in 2018, beating some of Woodhull’s best in the process. Brewer finished just outside the top five in points by finishing sixth and ended the season with two big wins and seven Top 5’s.

NAPA Crate Sportsman Rookie Cole Youse will take Rookie honors in his division. The youngster out of Westfield, PA was coming off double championships in the youth divisions at Woodhull and Outlaw Speedway. Youse spent the year learning and transitioning from Mustangs to the Bicknell Northeast Modified-style chassis. Youse ended the season with one Top 5 and four Top 10’s.


It was also a learning year for Joe Layfield in the SWL Awards Crate Late Model division. Layfield finished sixth in the final points tally and finished the year with two Top 5 finishes during the 2018 season and will take home Rookie of the Year honors in doing so.

In the Joe Willcox Performance Automatics Street Stocks, youngster Noah Talada will take home Rookie of the Year honors. Talada spent his 2018 season getting the handle on a Street Stock after moving up from the Warriors in 2017. The Talada machine also sported Mission 22 on his No. 22, to raise awareness for Veterans Mental Health and Suicide Prevention Resources.

One of the more popular cars in all of the Woodhull pit area was the No. 73 Woodhull Auto Supply Hobby Stock driven by AJ Niedermaier out of Andover. Niedermaier picked up three victories along the way enroute to a sixth place finish in the points and 2018 Rookie honors for his division. He finished the year with three wins and six Top 5’s.

Local RC racer and longtime fan/crew member at Woodhull Raceway, Travis Webster, had a great showing in 2018 to claim Rookie honors in the Daugherty Auto Sales & Service Mini Stocks. Webster’s No. F7 had several strong runs early in the year and was plagued by mechanical woes at the end of the season. But his strong start and four top fives total landed Webster at the top of the Rookie heap for 2018 in the Minis.

Last but certainly not least, Cara Pitts and her Chevy Cavalier No. 92T took top Rookie honors in the Bear’s Auto Body Front Wheel Drives. Pitts is one of the nicest drivers, lady racer or not, in the pit area and never arrived to the racetrack without a smile on her face. This Rookie proved in 2018 that great stories at your local dirt track don’t always come from the teams with the biggest budget or the driver with the most tallies in the win column. Pitts scored her first career Top 5 finish on August 18 enroute to Rookie of the Year.

Pits open on Saturday at 3:00PM for the 14th Annual Lyle Sherwood Memorial, with pit passes carrying a $35 fee. General Admission gates swing open at 4:00PM and will be $16 for adults 13 and up and $8 for Seniors 62+ and Students 8-12. The weekly $1 off Early Bird Special will run from 4:00PM-5:00PM. Children 7 and under, camping and parking are always free at Woodhull Raceway.