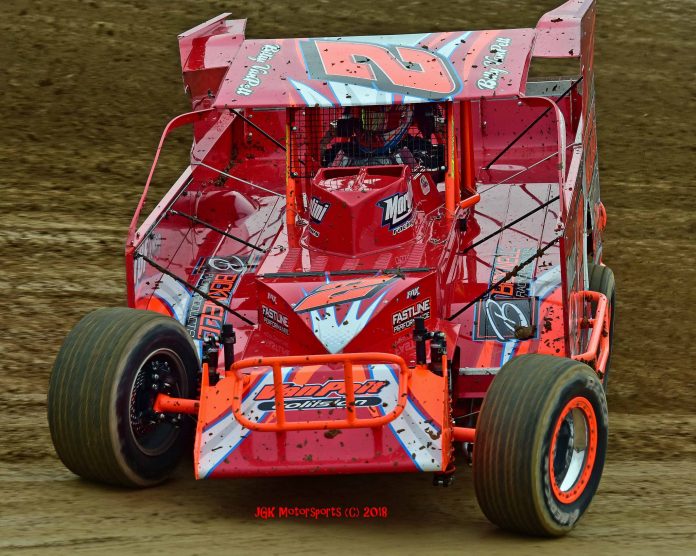 Westfield, NY pilot and 20-time Woodhull Modified track champion, Billy Van Pelt, made it five Lyle Sherwood Memorials in a row with his 25-lap victory on Saturday night. Van Pelt took command of the race under caution on lap 6 when Dillon Groover pulled off the track as the race leader with a motor operating on seven cylinders.

Groover had led up until that point in the race, with Van Pelt and Bobby Davis’ Ford-powered No. 60J running in the top three. A dropped cylinder would end Groover’s night, while Van Pelt was just getting his car how he liked it. It wasn’t his normal ride, however, as his No. 2 was sold to Brian Doolittle’s team after Championship Night.

That found Van Pelt driving car owner Kevin Chilson’s No. 13 for the night and he would give the Instant Heat Wood Pellets, Two Rivers Timber Company ride a winning one. Davis was as close as a car length late in the going, but as Davis would close the gap by one to two car lengths- Van Pelt would take those car lengths back on the next lap.

The margin was three car lengths at the checkered flag, with Joe Dgien completing the podium with a solid third place finish for the No. 3x. Donnie Lawson was the race’s Hard Charger from sixteenth to finish fourth, while Brady Fultz took the Herbie Wright-owned No. 88 Batmobile to a top five finish.


In the Crate Sportsman division, Brett Buono captured the victory by winning the 25-lap feature. It was Buono’s first of the year at Woodhull and now makes it two-straight seasons with Fall post-season victories for the Buono Racing, Precision Racing Fabrication No. 64B.

Buono and the minions on his machine powered to a big advantage, which got erased by a caution flag with five laps to go. That yellow flew for Stevie Hartman and Bobby Peoples in Turn 2. Hartman had spent the entire race trying to get around Peoples and would do so with 5 to go.

Entering the first turn, Peoples had a slight miscue that ended in contact with Hartman which sent Hartman into the spin cycle. Peoples and his cousin Kenny Jr. in the No. 5k made contact but kept going. Hartman’s night was done, which ended Bobby’s night as well per communications over the one way radio from track officials.

With five to go, Kenny Peoples had an opportunity, but Buono was just too good through the middle of the track on the restart. Buono would race on to get the win and a guaranteed starting spot for Genesee Speedway on Saturday night September 15. Mike Bills, Kenny Peoples Jr., Stacey Jackson and Tim Schram rounded out the top five.

Buono chose not to use the guaranteed spot for Genesee Speedway, leaving Mike Bills as the Woodhull representative for this weekend.

John Waters held off a strong-running Kurt Stebbins to win the 20-lap Crate Late Model feature race. Waters got to the lead but by no means walked away for the victory.

Stebbins got to second and put an immense amount of pressure on Waters for the lead in the closing laps. Wayne Robertson and Steve LeBarron made it a four-car party for the race lead, with Darin Horton filling out the top five spots.

Stebbins was just as good in his Street Stock, as he would dominate the feature race to claim yet another late season victory at Woodhull. Teddy Morseman was just as potent to finish in the second spot and was the closest in distance to challenging Stebbins for the win. Both drivers will be favorites entering the September 22 running of the 4th Annual Woodhull 100.

Dennis Cummings who had many victories between Freedom and Genesee Speedway this season, had one of his best Woodhull runs in recent memory to finish on the podium. Mick Seeley and Dan Gardner battled with their Potter Chassis machines to decide the top five finishers.

Jeredd Dennis made a big move after the regular season to trade his Street Stock for a Hobby Stock from the Birdsall racing team. Dennis finally had a shot to race against his dad and 2017 Hobby Stock track champion ‘The Mole’ Carter Dennis, something that had not occurred in three decades according to Dennis.

But to get the win, Dennis had to hold off Championship Night winner Greg Young. Young and Les Smith both worked high and low to try and find a way around Dennis. But Dennis was committed to running the cushion and never faltered in their 20-lap feature race.

Ray Hyer outbattled Rick Amidon in slower traffic to pick up the win in the Mini Stock division. Amidon had dominated the race out front, with Hyer trying lap after lap to make a run work down low all the way around the racetrack.

Entering turn one, Amidon had two lapped cars running side by side and had to make a split-second decision to go high or low to clear them. He chose high and the lapped cars swung out high to give room to the leaders. Hyer snuck by and won a heartbreaker over Carter Crooker and Amidon.

Crooker was making his first start in the Mini Stock since graduation from the Woodhull Warriors and drove up through the pack twice to finish second in his debut.

In the Bear’s Auto Body/C.B. Motorsports Front Wheel Drive Challenge race, Codie Baker took Round 1 over Adam DelGrosso. DelGrosso literally threw everything but the kitchen sink at Baker to try and get by but Baker was up to the task every single time.

The two drag raced to the line, side by side, on the final lap with Baker nosing ahead of DelGrosso. Ransomville Speedway’s Cole Susice finished third, ahead of Outlaw Speedway’s Shawn Gleason and Baker’s team car Nick Brown in the top five.

Baker also picked up an additional $50 award from the New York State Stock Car Association as he was the first NYSSCA member across the line. NYSSCA donated $50 to celebrate their 50th Anniversary supporting the drivers, crews, fans and media members of the Empire State.

Ronnie Dailey went out in grand fashion, winning the final Warriors race he will ever compete in. Dailey plans to move up to the Front Wheel Drive division at Woodhull starting with the ‘Full-Fendered Frenzy’ on September 22.