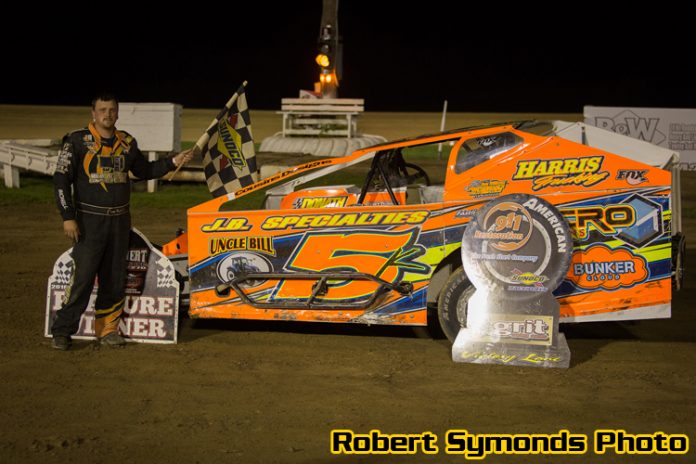 WOODHULL, NY – The Peoples family has done a lot in motorsports at Woodhull Raceway and many of the Southern Tier dirt tracks. But Friday night, Kenny Peoples Jr. did something they had not yet done- add his name as a Grit Racing Series winner.

Peoples started the Cummings Trucking 30 in the fifth spot and made very quick work of things to take over the lead of the race on lap four. Up to that point, Brandon Butler led the event while trying to hold off the fierce charges of Brett Buono.

Peoples was glued to the bottom of the racing surface and made a very aggressive run to the inside of turn three that stuck, while Butler seemingly had a tight car to start the race. Peoples drew alongside Butler on lap three, but couldn’t get by until lap four.

The race was slowed mid-race for a hard crash on the backstretch involving Brett Buono, Bob Butcher and Tim Guild. Buono clipped the first turn implement tire and folded up the front end, sending him up the racetrack in turn two.

Without being able to steer the car, Buono came down the racetrack in the path of Guild who was full throttle off turn two and had nowhere to go. All drivers were ok, with only Butcher being able to continue on as Buono and Guild had terminal damage.


Peoples was able to manage the race and his tires as the race went on a long green flag run in the middle of the race. For awhile it looked like the race would go green to checkered after the big crash, but Dale Welty would slow with a broken front end to bring out the caution on lap 28.

This set up a green-white-checkered finish and allowed Woodhull regular AJ Costley to restart on Peoples’ back bumper. Costley had his best chance to make a move as the leaders came through turns three and four coming to the white flag. Costley packed into the entry hard, but could only get to Peoples’ bumper.

Peoples raced away on the final lap to his very first Grit Series win over Costley. Tommy Collins had a solid race on Friday night to come home with a great points night in third, Jake Dgien raced from eighth to fourth and Todd Titus made his third Woodhull start of 2018 to crack the top five.

The Woodhull Raceway Street Stock Challenge Series also raced on Friday night in the “Night Before the 100.” One last opportunity to test and tune for Saturday night’s running of the $1,000-to-win Woodhull 100, the season finale for the Challenge Series.

Branden Morseman had luck on his side in drawing the pole for the 20-lap tuneup and took full advantage of his starting spot to take the early lead. Behind him, one of the best Street Stock battles we have seen all season was going on. Mike Williams, Kurt Stebbins, Teddy Morseman, Glenn Whritenour, Jared Hill, Dylan Cecce and Brett Marlatt fought tooth and nail for position inside and outside the top five.

An early race restart allowed Williams to flex some muscle in his No. 19 to fend off Stebbins for the runner up position, but Stebbins would eventually get by on the outside. Track conditions were very tricky Friday night, with the Steuben County area seeing upwards of six inches of rain over the course of the last eight days. Track crews reworked the surface to smooth things out several times to provide the best surface possible.

Once Stebbins got by Williams for second, it was an all-out attack to catch and challenge Morseman for the lead. The outside lane was a bit choppy and didn’t necessarily allow Stebbins to carry momentum like fans are accustomed to seeing from him.

It was a race of attrition and survival in the Hobby Stocks 25-lap feature event Friday. Penn Can racer Dusty Decker made his very first trip to Woodhull for this race and left Woodhull now 1-for-1 in Hobby Stock competition.

Decker and Les Smith battled hard for the lead, with Decker making moves on the outside to eventually take the lead and go on for the win. Smith would suffer two right rear flat tires before the end of the race, while other top runners like Jeredd Dennis and Carter Dennis also suffering trouble.

Decker beat out Billy Williams, Carter Dennis, rookie Mike Spencer and Smith to the line for the win.

The Bear’s Auto Body/C.B. Motorsports Front Wheel Drives competed in Race 2 of their three-race Challenge Series on Friday, with Codie Baker now having swept the first two races of the three-race set. Baker bounced his No. 14 through the rough cushion to take the lead and then hugged the lower lane to win the race by a good margin over teammate Adam DelGrosso.

The Front Wheel Drives return on Saturday night to race for $1,000-to-win for a 25-lap showdown.

Ray Hyer and Ron Dailey Jr. made it a good race in the closing laps in the Open Mini Stocks with Hyer coming out on top to take top honors. Hyer went over the edge in turn 2 with two laps to go, but Dailey could only get as close as the door trying to make the race-winning move.