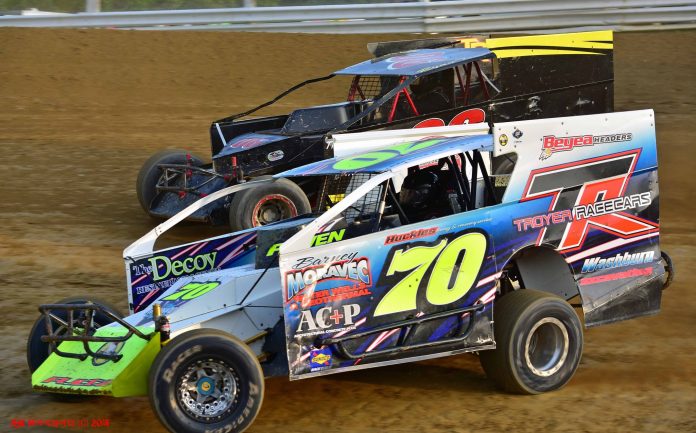 WOODHULL, NY – Sun and a few clouds filled the sky this past Saturday as drivers and fans worked there way to the track. Brico Technologies and the Canisteo Police Club were on hand talking to fans about their great businesses. The Canisteo Police club brought several law enforcement officer with their patrol cars. Fans got to engage with the officers and check out the police cars before the heats kicked off.

The Insinger Performance Modifieds kicked off first. Bobby Davis, Brady Fultz, and Josh Keesey all checked off a heat win. The handicap was in play this week so it put Dayton Brewer and Josh Nobriga on the front row. Nobriga had a great start and jumped to the lead.

On lap 6 Fultz made his way to second and was battling Nobriga for the lead. Fultz and Nobriga races side by side for a few laps. Fultz found a run on the back stretch on lap 11 and passed Nobriga for the race lead. Billy Van Pelt worked his way up to the top five and battled Nobriga for second. Nobriga held on to place second, Van Pelt third, Davis fourth, and Donnie Lawson fifth. Fultz claimed the win.

Woodhull Auto Supply Hobby Stocks were second on the dockett. Brendan Schweigart and Brent Williams set the pace. An early race caution set things back up. Carter Dennis worked his way up to the top five by lap three.

Jeredd Dennis came creeping up from the back and was leading by lap 4. J. Dennis lead the way and the battles continued through the pack. C. Dennis, Les Smith, and


AJ Niedermaier battled for second. Smith tried making moves for second but couldn’t quite make it happen. J. Dennis saw the double checkered flags for his third win in a row.

Robert Gardner and Scott Lehman Jr. set the pace for the Johnson’s Auto Supply FWD. Lehman took the race lead early. Cars went four wide battling for positions on lap 2. Ryan Austin who started fifth made his way up to the front on lap three.

Austin sailed away while Codie Baker, Lehman, and Nick Brown battled for positions. Austin claimed the win with Baker, Lehman, Brown, and Nate Freeland in tow.

The NAPA Crate Sportsman rolled off with Cole Youse and Bob Butcher. Youse grabbed the lead from the green. Tim Guild jumped into second and Kenny Peoples Jr. got up to fifth. Early race cautions put the pressure on Youse.

Lap 22 saw a caution and set things up. Youse held the lead to claim the victory with Peoples in second, Buono in third, Butler in fourt, and Guild in fifth.

Daugherty Auto Sales and Service Woodhull Warriors kicked off with Brooke McClain and Jacob Tubbs. McClain got the lead early while the rest of the pack would battle for positions.

Darin Horton and Jason Knowles battled for third but Knowles had the advantage. Stebbins made his way through lap traffic while Knowles tried chasing him down. Stebbins sealed the victory with Knowles in second, Horton in third, Zach Wiech fourth, and Dave Richmond in fifth.

Carter Crooker made his way up to second after starting in the 12th position. Ketrow continued to lead and Crooker didn’t quite have enough to make it by him. Ketrow came home with the victory with Crooker in second.

Joe Willcox Performance Automatics Street Stocks finished off the night. Mike Williams and Noah Talada started the race. Williams grabbed the lead. Dan Gardner made his way up to second. The top four cars were running close together battling for positions.

Kurt Stebbins who started 11th found his up to the top five. Stebbins switched lanes and tried to make a pass on the outside but couldn’t get it done. Stebbins gained the lead on lap 19.