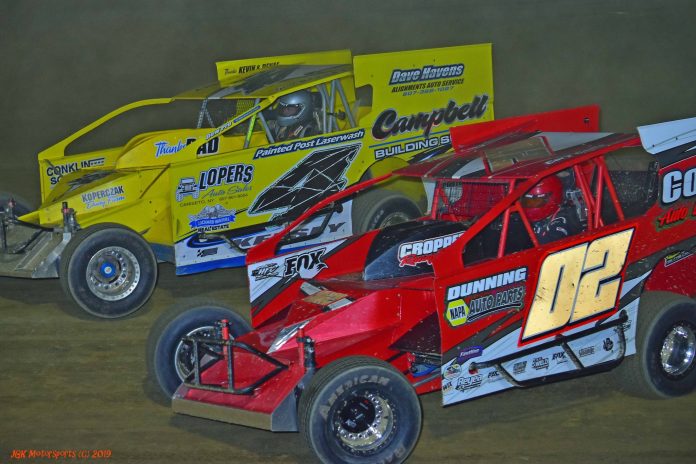 WOODHULL, NY – Saturday night people filled the grandstands for Armed Forces Night presented by Universal Plant Services. The weather was finally in favor as the sun shined and rain was at zero percent.

The Insinger Performance Modifieds kicked off the feature events Saturday night. They ran a distance of 35-laps in memorial of George Williams. Russell Morseman and Brandon Martin set the first row as Tony Van Pelt dropped the green flag. Jumbled up Morseman grabbed the lead. Earl race cautions still put Morseman on top until Cory Costa made his way to the top three.

After falling back early in the race Costa found himself in second on lap 12. Josh Keesey who started 13th made his way up to the top ten and slowly broke his way into the top five. Costa stretched his lead out with Donnie Lawson battling his way to try and take the lead.

Costa clinched the win with Lawson, Cartwright, Keesey, and Morseman in tow.

Adam DelGrosso and Ryan Austin went first off the starting grid for the Johnson’s Auto Supply FWD. Austin was fresh off a win from May 18. Austin grabbed the lead and started stretching it.

The Cummings Trucking RUSH Crate Late Models rolled off third. 2018 Track Points Champion, Steve LeBarron, found himself on the pole with Kane Stebbins to the outside. LeBarron grabbed the lead off the start.

Cara Pitts and Josh Webster rolled the 13- car field off for a 30-lap feature event in the Daugherty Auto Sales and Service Mini Stocks. Webster grabbed the lead. Early race cautions tested Webster but he stayed strong as Scott Lehman and Travis Webster made their way up the pack.

Points leader Carter Crooker got dealt a bad hand as he was involved in an early race caution forcing him to go to the pits and get put laps down before re-entering the race. Rick Amidon drove his way from tenth up to third for a good finish. J. Webster claimed the win as Lehman followed in his trail for second.

The NAPA Crate Sportsman had Mike Bucanhan and Isabel Barron on the first row. Bucanhan grabbed the lead and was tested with early race cautions. AJ Costley’s handicap started him in the fifth position. By lap 7, Costley battled Bucanhan for the lead.

Jake Dgien who started in the 13th position due to handicap found his way to second place by lap 10. Brett Buono and Ted Morseman also found their way up into top ten positions after starting farther back in the pack. Costley brought home the win with Dgien, Bucanhan, Morseman, and Bobby Peoples in tow.

The Daugherty Auto Sales and Service Woodhull Warriors were back in action Saturday. Ethan Decker and Tess Johnson set the pace. Decker grabbed the lead but Josh Isaman would take over the lead by lap two.

Points leader Brooke McClain who started last due to handicap made her way up to third on lap three. McClain and Isaman battled for three laps while McClain claimed the lead on lap six. . McClain drove away for her fourth straight win with Isaman, Dylon Morseman, Cameron Nichols, and Decker following.

Mick Seeley and Noah Talada set the front row for the Joe Willcox Performance Automatics Street Stocks. Seeley had a great start and grabbed the lead. Coming off of motor troubles in the start of the season Seeley was having his best run this season. Cautions set Seeley back and he found himself having car troubles yet again.

Kurt Stebbins found himself leading after a mid race caution took out the front cars. Brett Marlatt made his way back up to the top five battling with Jim Buck. Stebbins won the race with Marlatt, Buck, Dave Muchuga and Brandon Birdsall falling behind.

The Woodhull Supply Hobby Stocks finished off the night. Leo Eldridge and Scott Brown paced the field. Mike Spencer who started in the third position found an opening and gained the lead.

Jeredd Denniss who started ninth due to handicap slowly made his way up the pack. The points leader got the lead on lap 8 and saw no turning back. The competition was fierce as drivers battled for positions. Dennis clicked off his fourth victory this season with Spencer, Carter Dennis, Brown and Aaron Miller rounded out the top five.