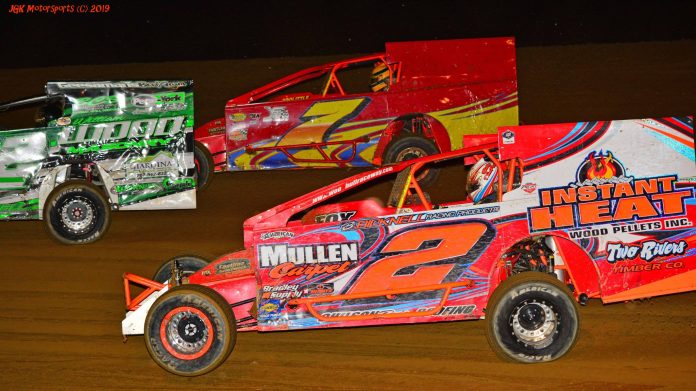 WOODHULL, NY – Shciffty’s Bar and Grill presented the racing action Saturday August 24. The competition started to get intense as the points season is dwindling down.

Brady Futlz and Chris Ostrowsky set the pace for the Insinger Performance Modifieds. Fultz grabbed the lead off the green but had to do it again after a caution on lap 1. Fultz piloting the no. 88 machine got back on the point with the restart. Billy Van Pelt who started fifth was in the second spot on lap three. Van Pelt immediately started putting pressure on Fultz. Dayton Brewer moved into the third position trying to hunt down Fultz and Van Pelt. On lap five, Van Pelt took the lead over Fultz. A caution on lap seven would put the field back together. Van Pelt, Fultz, Brewer, Cory Costa, and Mike Bills would restart in the top five spots.

Fultz and Brewer swapped second and third for a few laps and left Fultz in the second spot on lap eight. Van Pelt continued his lead while Josh Nobriga moved up into the sixth spot. Fultz, who was running second; had car troubles suddenly and pulled into the infield to avoid caution on lap 12. That moved points leader, Costa moved into second place. Joe Dgien moved up into the fifth spot while the top three cars pulled away from the pack. Van Pelt dealt with lap traffic while Costa tried to close the gap. Coming down for the checkered flag Costa slowed down but managed to get the second spot finishing behind Van Pelt. Brewer, Dgien, and Bills completed the top five.

Leo Eldridge and Greg Crooker took the green flag in the Woodhull Auto Supply Hobby Stocks. Crooker grabbed the lead and started to stretch it from the drop off the green. Carter Dennis and Brent Williams got tangled up on lap two. Points leader, Jeredd Dennis grabbed the third spot on lap five and was making his way towards Crooker. Mike Spencer and J. Dennis battled for second until J. Dennis took over the second spot on lap six.

As the field saw another restart J. Dennis and Crooker were nose to tail. J. Dennis was chasing Crooker. Meanwhile Scott Brown ran solidly in third holding back the rest of the field. Cliff Miller, Chris Woodard, and Scotty Brown went three wide battling for positions coming out of turn four. J. Dennis closed on Crooker back up front but Crooker had the run off the corner. Crooker grabbed his first win of the 2019 season with J. Dennis, Woodard, Scott Brown, and C. Dennis finishing behind him.


Johnathon Preston claimed the victory for the Patriot Sprint Tour beating the current points leader, Davie ‘No Panic’ Franek. Preston grabbed the lead early in the race after getting a good run on the top side. Preston, Jordan Thomas, Franek, Clay Dow, and Joe Trenca finished the top five.

Joseph Gillespie and Nate Freeland started on the front row for the Johnson’s Auto Supply FWD feature. Freeland grabbed the lead and led the first lap. Points leader, Codie Baker quickly made his way to the front on lap three. Baker wasted no time with stretching his lead. Nick Brown and Freeland battled putting Brown up into the second spot.

Baker slowed coming into turn three and Brown had a chance to catch up but didn’t have enough to get by Baker. The cars spread out, each driving their own line trying to catch Baker. Baker started to tackle lap traffic as the third place runner, Freeland slowed and pulled into the infield. Baker claimed his eighth victory with Brown, Scott Lehman Jr., Gillespie, and Williams in tow.

Cole Youse moved into the second spot with Jake Dgien right behind him. Points leader, Kenny Peoples Jr. rode in the fourth position but hit a uke tire and was unable to finish the race. Youse and Dgien continued to battle as Dgien pulled alongside Youse. Youse had the momentum and kept ahead of Dgien. Morseman continued his lead despite the restarts. Dgien got by Youse for the second spot on lap 18. Morseman captured his first NAPA Crate Sportsman victory with Dgien, Youse, Bills and Mike Bucanhan in tow.

Jim Weatherley and Joe Birdsall took the green in the Joe Willcox Performance Automatics Street Stocks. Dan Gardner and Birdsall battled for the lead on lap one. Gardner grabbed the lead away from Birdsall on lap two. Brett Marlatt battled Noah Talada battled for fourth place.

Kurt Stebbins drove up through the pack and got into the second position on lap eight.

Gardner still held the lead as Stebbins put the pressure on him. Lap nine clicked and Stebbins pulled along side Gardner through turns one and three. Coming off the back stretch Stebbins took over the lead from Gardner. Brett Crawford also moved his way up into the second position sneaking by Gardner. Stebbins grabbed his eighth victory of the season with Crawford, Gardner, Branden Morseman, and Mick Seeley in tow.

Reese Hackett and Josh Snyder brought the Daugherty Auto Sales and Service Mini Stocks to their green flag. Snyder grabbed the lead as cars went three wide off of turn four. Jason Ketrow pulled up alongside Snyder and Danielle Thomas made it three wide battling for spots. Ketrow grabbed the lead over Snyder while points leader, Carter Crooker made his way up to the front. Josh Webster was on a move Saturday as he started passing cars and made his way up to third on lap ten. Rick Amidon was also hustling Saturday moving up through the pack with Webster.

Crooker and Ketrow pulled alongside each other but got tangled and both were sent to the back and forced to come back up through. This put Webster in the lead and Amidon right behind him. Webster led lap 12 but Amidon got around him to claim the lead on lap 13. It didn’t take long for Ketrow and Crooker to be back into the top five. Ketrow battled Amidon for the lead on lap 14. Crooker and Ketrow continued to battle but Ketrow suffered a mechanical problem and pulled into the infield to avoid collision and caution. Crooker grabbed another victory with Rick Amidon finishing behind him. Webster, Thomas, and Scott Lehman finished the top five. 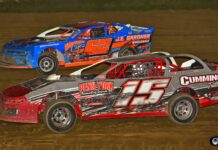