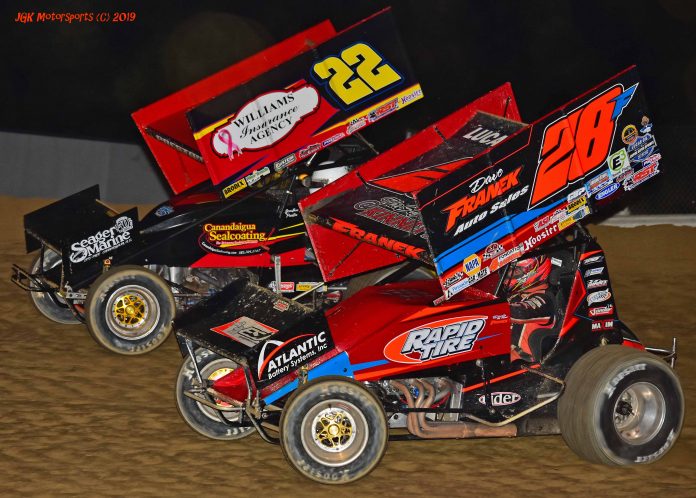 WOODHULL, NY – After finishing on the podium multiple times in 2019, Romulus, NY driver Jonathan Preston was able to park it in Patriot Sprint Tour Victory for the first time in his career after leading all 25 laps at the Woodhull Raceway.

“This is Incredible” Preston stated. “I went from no wins from the start of the year and this is my fourth overall. I have to thank my parents, they put a lot of money into this operation, and with out them you can’t do it”

Preston started along side current Patriot Sprint Tour point leader, Davie Franek as the two contested for command from the drop of the green flag. Preston would pick up a lot of momentum riding the top and would take the lead racing down the back stretch.

Jared Zimbardi would be riding in the third spot but on the fourth lap, he ended up slapping the front stretch wall off turn four and that would end his night early.

That would slide Jordan Thomas into the third spot with Joe Trenca and Mike Koehler completing the top five.

On a lap seven restart, Preston would change his racing line to the bottom and protect anyone that attempted go by him.

The turn four berm would play victim to several drivers which included Davie Franek who was running in second a majority of the race until he jumped the berm on lap 14 which allowed Jordan Thomas to take over second.

A lap later Mike Koehler who was running fourth at the time, over cooked turn two flipping twice end over end before landing on its side. It appeared that the car was going to be okay to continue but it was discovered once it was put back on all four tires that there was no power steering and frame was bent. Koehler’s night would be complete and racing would have to resume without him.

Preston would still maintain the race lead but Thomas was all over the tail tank of Preston in the final laps. Preston would hang on for his first career win in PST competition over Thomas and Franek. Clay Dow who made his first ever start at Woodhull finished fourth after starting tenth. Joe Trenca secured his third consecutive top five.

Preston knew he had to go to the bottom as the top side was sometimes too much to handle.

“The top was very unforgiving tonight” Preston Continued “I tried it a couple times, and it just upset the car, he showed his nose multiple times so I knew I better change my line.”

For Jordan Thomas, the season of podiums continues as this was Thomas’s seventh Podium finish in 2019 but still no wins.

“Once again, we have nothing to hang our heads about” Thomas said. “We really want to get this win bad here, we just need to find a little bit more of a faster car.”

Davie Franek, who has two wins at Woodhull in 2019, had to settle for a third place run after starting on the pole.

“It is always disappointing starting on the pole and giving that up” Franek stated “The track was racy, that’s what you need because it really separates you from the rest of everyone else.”

The series now focuses on the Month of September with the highest paying races and it starts with the inaugural New York Nationals at Land of Legends on September 6 and 7. A two-day affair with night two paying $5,000 to the winner.