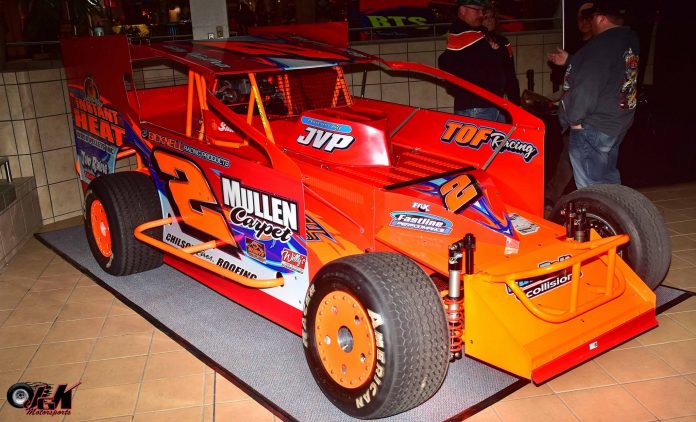 WOODHULL, NY – When the fear, hysteria and public madness seems blinding, motorsports always finds a way to overcome and provide a ray of sunshine. Motorsports stood tall this weekend as fans shed the public fear to bench race and check out the new and updated equipment that Woodhull Raceway and its race teams, Swarthout Recycling and Arnot Mall came together to provide.

‘New York’s Toughest Bullring’ is off to a solid start for the upcoming 2020 race season after a widely successful Swarthout Recycling Car Show. Arnot Mall opened its doors to the racing community and that community supported the local mall- turning out big numbers on Saturday and a mild turnout on Sunday afternoon.

The Steuben County speedplant is gearing up for their 56th consecutive season of racing at the Woodhull, NY facility founded by the Williams family with first year owner and promoters Terry and Nikki Brewer at the steering wheel.

Fans turned out in large numbers Saturday to check out all the fresh paint and graphic schemes as all of Woodhull’s 8 weekly divisions were represented throughout the mall. Drivers peddled race team merchandise and raffle giveaways to support their 2020 efforts.

Meanwhile, fans flocked to the Woodhull Raceway booth in center court to purchase their season passes, pay for the Skybox Booths high atop the third-mile track and reserve their favorite grandstand seats for the upcoming season. Drivers submitted registration forms and applied for NYSSCA membership, of which Woodhull is a proud member for many years.

Terry and Nikki Brewer, on behalf of the entire Woodhull Raceway team, would like to thank all drivers, fans, sponsors and the general public for supporting their car show this weekend. It was a huge bright spot in what had been a dismal week in national and world news.

Woodhull Raceway is located in Woodhull, NY, just 30 minutes West of Corning, NY and competes weekly on Saturday nights from mid-April through Labor Day Weekend. The track offers several special events including the ULMS Super Late Models in June, Patriot Sprint Tour 360 Sprints in May and August and the Short Track Super Series Modifieds in early-August.