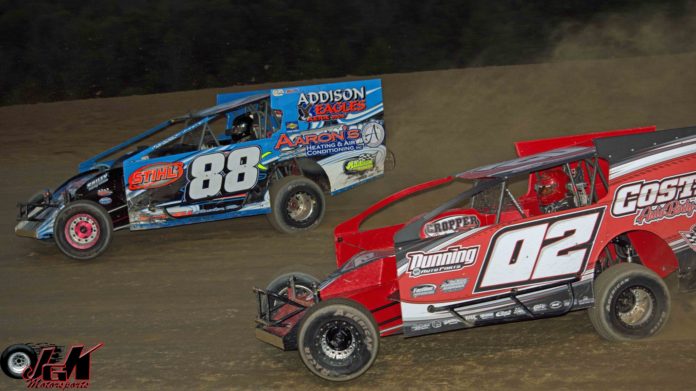 WOODHULL, NY –  Mother Nature brought some much-needed rain to the entire area on Saturday morning and threatened racing to take place that night. However, she held off and let over 100 cars pack the pit area once again at the Woodhull Raceway.

Brady Fultz, Billy Van Pelt, and Ajay Potrzebowski Jr all took home Insinger Performance Modified heat race wins. All of those drivers had their work cut out for them as they would start 5th, 7th, and 12th in the 25 lap feature event.

Josh Nobriga and Dayton Brewer led the field to Tony Van Pelt’s green flag. Nobriga quickly took the race lead while Brewer battled to keep 2nd away from Joe Dgien and Brady Fultz. Brewer ran the top lane and ended up going over the cushion in turn 3, which allowed Dgien and Fultz to get by. After this, Brewer continues to fight a very tight race car for nearly the entire feature event.

Early on, Cory Costa and Billy Van Pelt were making some ground quickly moving up into the top 10. Nearly midway through the feature, Fultz was able to use the cushion and get around Dgien for 2nd. Just a few laps later, Costa was able to work by Van Pelt for 4th and Dgien for 3rd when the yellow flag flew. This restart worked best for Fultz and Costa as they took advantage of Nobriga who was tight in turn 2. Fultz would take command with Costa in 2nd.


While the new battle for the lead took place, Potrzebowski and Dgien battled for 4th and Lawson fought for 7th with Doolittle in the closing laps. Brady Fultz was able to hold back Cory Costa and get his first win of 2020 at New York’s Toughest Bull Ring.

The Cummings Trucking RUSH Late Models had 10 cars with Scott Waters and Jason Knowles picking up heat race wins and they would be the first to lead the field to the green flag. Waters slid in front of Knowles and Kurt Stebbins to hold the lead on the first lap and would pull away for the meantime. Knowles was able to hold off Kurt Stebbins for 2nd.

On lap 5, Knowles quickly caught Waters and was able to use the bottom lane off turn 2 to propel him to the lead for lap 6. Brian Knowles was able to work the bottom side of Kurt Stebbins and get by him for the 3rd spot on lap 7. On the move was JJ Mazur who started near the tail end of the field and was able to get by Clayton Tarabori and Kurt Stebbins in the closing laps. Jason Knowles continued to lead to the checkered flag and would win over Scott Waters and Brian Knowles in a green to checked race.

Another full field in the NAPA Crate Sportsmans with 27 cars lining the pit area. AJ Costley, Kreg Crooker, and Kenny Peoples Jr made the most of their heat races by capturing wins. In their 25 lap feature Kreg Crooker and Carter Crooker led the field to the green flag. Kreg took the lead with Carter in there for 2nd, Blake Lawson in 3rd.

An early caution would slow the field in the first laps of competition. On the ensuing restart, Lawson would be split by both Ajay Potrzebowski Sr and Dale Welty to take over 3rd and 4th while Art Goodier also takes advantage and moves to 5th. Goodier then takes to the bottom lane and gets by Dale Welty for the fourth position.

Trying regain momentum, Lawson closes right back in on Dale Welty while Welty runs the middle groove. The defending track champion Kenny Peoples Jr makes a move in turns 3 and 4 to put his Micro Solutions 5K on the top side of the speedway. After working by Lawson, Peoples tried again on the top in 1 and 2 but the yellow flag would slow the field.

On the restart, Peoples moved by Welty and Potrzebowski now takes his AMP General Contracting 72 on the cushion to hold the third spot and make a bid for second but It was to no avail. Peoples was able to move past Goodier on the bottom in the next couple of laps to put him into fourth but then a caution would fall at the half way mark.

Potrzebowski, on the restart, once again goes to the top but it was a bit too much for the car to handle as he goes overtop of turn 3 and stall the car which draws the yellow. AJ Costley silently made his presence known on the restart shuffling himself into the mix for 2nd in the closing laps. However Peoples was able to get by Crooker for the runner up spot but in the end, it was Kreg Crooker who pulled away and held back all challengers to win his first feature of the season.

The Joe Willcox Performance Automatic Street Stocks hosted 12 cars with Branden Morseman and Brett Crawford getting heat race wins. Brett Marlatt and Kane Stebbins brought the field to the green flag with Brett The Jet leading the way on the opening lap. Dan Gardner made a move on the bottom to have a side by side battle with Stebbins for the runner up spot.

At this point the two time feature winner, Glenn Whritenour is on the move getting by Brett Crawford, Branden Morseman, and Dan Gardner to move up to third before the half way mark. Yellow comes out on lap 7 to slow the field. On the restart, Whritenour was able to shuffle past Kane Stebbins before the yellow flag falls again on lap 8. On the restart, Whritenour is able to pull along side Marlatt and take the race lead at the half way mark and he would never look back. Whritenour wins his third race in a row over Marlatt and Morseman.

AJ Neidermaier and Scott Brown win heat races. Les Smith and Mike Spencer led the field at the start of the 20 lap feature. Scott Brown driving low on the bottom side gets by Mike Spencer then Les Smith by a nose to lead the opening lap. Chris Woodard works the top side to get by Mike Spencer for third while Carter Dennis gets by Lee Bills for fifth.

Jeredd Dennis, who started 12th, works by Nate Hill as the field completes lap 7 to enter 6th. It was later found that Hill had ignition problems and did not have the right gear for the High Banks and would plague him for a seventh place finish at the end.

Woodard was able to keep the topside momentum on Smith to take second place as they work passed lap traffic. Soon after, the Dennis Family have a father – son competition as they are both attempting to get by Mike Spencer for a top 5 spot. Spencer runs the bottom while Jeredd Dennis goes to the top and work by him at the half way mark.

While working by Dennis Loucks, Dennis and Smith battle for a top 3 spot. Dennis soon gets by and sets his sights on the top two. Meanwhile Scott Brown took off with the race lead and never looked back. Brown picks up his first feature win since 2009 holding back Woodard and Dennis who rounded out the top 3.

Williams and Freeland had tough battle with Freeland getting the best of Williams but he was not able to hold back Baker either as Baker gets by Freeland for third. Back up front, Lehman Jr gets by Delgrosso to take the race lead in the closing laps and win his first feature of 2020.

Another thirteen car field, this time for the Big Jim’s Wicked Tees Mini Stocks. Jason Ketrow, Josh Webster wins heat race events while Jason Gleason and Josh Webster lead the field to the green flag. Gleason would assume the race lead but Webster would work the top side and lead lap 1. Travis Webster quickly moved from his 6th place starting spot. Gleason and Josh Webster battled for the lead side by side with Travis right behind Gleason. Travis Webster made a move through the middle to pass Gleason in turn 3.

Josh Webster using the same line as his brother Travis was able to work by Jason Gleason for second. Jason Ketrow starting working his way through the field when he caught Ted Morseman a little quickly heading into turn 3. Morseman spins and stalls the car which draws the first yellow. Ketrow is adverted to the tail on the restart and would have to make up ground yet again. In the final laps of the race, Jason Warner and Jason Ketrow both get by Gleason for 3rd and 4th while Travis Webster gets the win over his brother Josh Webster.

The Big Jim’s Wicked Tees Woodhull Warriors had 8 cars ready to rock and roll. Levi Riley held back Jacob Tubbs to get his first ever checkered flag at the Woodhull Raceway in the 6 lap heat event. In their 10 lap feature event, Levi Riley and Marshall O’Brien led the field to the green. Riley would lead lap 1 over a hard charging Jacob Tubbs. Ethan Decker spinning in turn four would draw the first yellow.

On the restart, Riley blocked a potential run by Tubbs in turn 1 and would hold the lead down the back straight but that won’t slow Tubbs as he made a move on the bottom off of turn 4 to take the race lead. Riley tried to close back in but it was to no avail. Ethan Decker moves up to 4th after his early race blunder and tried to work by Marshall O’Brien for the third spot. Jacob Tubbs though would see the checkered flag for the third time over Levi Riley, Marshall O’Brien, Ethan Decker, Jaden Stone, Chelsea Harris, Jordan Costley, and Bradley Morseman.

Next week, the Woodhull Raceway will see another complete show plus the NAPA Crate Sportsman King of the Bull Ring on July 4th sponsored by Louies Gun Shop and the Addison Eagles Club.