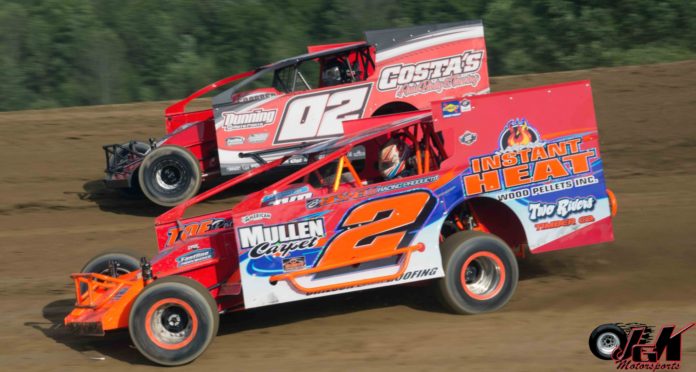 WOODHULL, NY – Saturday night turned out to have another star studded pit area on a hot summer day in the Southern Tier of New York at the Woodhull Raceway for another great night of racing action sponsored by KB Graphics. All events were once again held virtually on twitch and youtube for everyone’s enjoyment.

The Insinger Performance Modifieds had 17 cars set to rip the high banks but it was Brady Fultz, Billy Van Pelt, and Joe Dgien taking home early wins in the heat races. The 25 lap feature did not disappoint. Van Pelt and Cory Costa brought the field to green and Mike Bills who started third pounced early. The Southern Tier Logging, Herrington Motorsports number 1 was already trying to take a top two spot from Van Pelt and Costa, but the top lanes propelled both those drivers past Bills. Ryan Tracy early on was also contending for a top 3 spot but to no avail. Nearly 5 laps in and Costa was turned up the wick on Van Pelt.

As the going was getting good, the caution flag would fly for the first time with only 5 laps in. Back to green, Costa went back to work on getting by Van Pelt as he would for the entirety of the event. Costa went to the bottom, was full alongside for the lead but couldn’t make it work. At this point, Donnie Lawson worked his way from 12th and was already up to 8th. Lawson soon found himself lane locked on the bottom, trying to get by both Ajay Potrzebowski II and Ryan Tracy for 6th. Just under 10 to go, Bills lost sight on the battle for the lead and found himself in the clutches of Josh Keesey and Joe Dgien who battled side by side for 4th right behind Bills. The caution would fly with 7 laps to go to cool the American Racer Tires yet again. When the drivers lit them back up, Lawson would work by Ryan Tracy and Joe Dgien to put him solidly in a top 5 spot towards the end of the race. Cory Costa would get one more shot at Van Pelt. He was full aside of Van Pelt down the back stretch and tried to slide the 21 time track champion but Van Pelt would come off the corner and still win the feature event over Costa, Lawson, Bills, and Dgien.

The Cummings Trucking RUSH Late Models did not disappoint again with 12 cars in the pit area and new drivers appearing at the high banks for the first time in 2020 including Chris Fleming and Tony Kelley. Taking heat race victories was Steve LeBarron and Brian Knowles. LeBarron would actual lead the field to the green with the Knowles brothers in close tow. LeBarron continued to lead the field but soon tt would be Jason Knowles first to get by LeBarron running the top side of the speedway then Brian Knowles followed suit getting by LeBarron for 2nd. Jason McGregor and John Haggerty also made their presence known as they both tried to get by LeBarron for third. Though no one, not even his brother, could catch Jason Knowles as he picked up the win on KB Graphics night.

The Woodhull Auto Supply Hobby Stocks once again had nearly a full field, 19 cars lined the pit area with Jeredd Dennis and Chris Woodard picking up heat race wins. Les Smith and Nathan Kriner would be the drivers leading the field to green. Smith would be the first one to grab the early lead with a hard charging Jeredd Dennis in tow. Soon Dennis would fall into the clutches of his father Carter who took over 2nd right on the bottom lane. With only a hand full of laps into the race, Carter Dennis started working the bottom lane to try to get by Les Smith for the lead. Soon after, Jeredd Dennis regained ground to join and Mike Spencer also came up to make a 4 car battle for the lead. The battle would fall to an early yellow flag. It would take a couple of laps after the restart but Jeredd Dennis, using the top line would take the lead. As the race raged on, Chris Woodard would march his way through the field and find him in a fierce battle for the lead. Heading into turn 1 in the closing stages of the race, Dennis and Woodard would make contact and draw the yellow with just a couple of laps to go. The incident would send both drivers to the rear. On the last restart, Carter Dennis would hold on to win the feature event over Scott Brown and Bill Williams both of whom worked from positions deep in the field.

The Joe Willcox Performance Automatics Street Stocks had all the favorites of Woodhull packed in a 12 car field. Brett Crawford and Glenn Whritenour win heat races earlier in the night. Dan Gardner and Brett Marlatt led the field to green. Gardner would make quick work of ‘The Jet’ and take the lead early in the 20 lap feature. Glenn Whritenour has been the car to beat all season long on the high banks and he had a strong car yet again. He would quickly rise to the top getting by the likes of Crawford and Marlatt to put him in the 2nd spot. A mid race yellow flag was the last thing that Gardner wanted to see but he was able to take advantage on the restart and dominate the bottom lane to fend off Whritenour and get his first feature win of the year. Teddy Morseman found his way up through the field to finish 5th and Kurt Stebbins in a borrowed car would finish 6th.

The Big Jim’s Wicked Tees Woodhull Warriors were fifth in line on the nightly schedule. Jacob Tubbs won the heat race. Marshall O’Brian and Jaden Stone led the field to green. O’Brian took the lead early but it was Jacob Tubbs using the top lane to his advantage and would take command of the field. Levi Riley found himself battling through the field to get by Jordan Costley and Marshall O’Brian but a hard run into turn 3 sent his machine up over the burm and would have to try it all again. Ethan Decker would also find a battle with Jordan Costley early for the 4th spot but a caution would slow the entire field. On the ensuing restart, Riley would go back to work on Tubbs for the lead and Decker would fumble on the cushion to draw a yellow after the half way mark. In the end, Tubbs would put his 89JR back into victory lane, Riley finished second, O’Brian third, Costley fourth, and Bradley Morseman rounded out the top 5.

NAPA Crate Sportsman Modifieds saw 23 cars with Kenny Peoples Jr, Blake Lawson, and Kreg Crooker took home heat race wins. Peoples Jr and Greg Crooker would lead the field to green. Peoples would take the early race lead. AJ Costley makes a move early to get by Crooker for 2nd but Crooker would have a mechanical issue that would sideline him for the rest of the event. Running third, Cole Youse would find his best lane just above the bottom groove trying to close in on Costley for 2nd but he would have trouble keeping back both David Mayo and Kreg Crooker. As the race raged on, Kreg Crooker would find himself in 2nd and close in on race leader Kenny Peoples Jr but saw the time winding down. A blocked track would cause a red flag with just a couple laps to go and was the perfect opportunity for Crooker to seize his chance at winning the race. However the opportunity wasn’t seized by Crooker and Peoples would capture his second win of the year.

Next up, the Johnson’s Auto Supply Front Wheel Drives saw 12 cars filling the field. Codie Baker and Scott Lehman Jr would win heats. Robert Decker and Matt Prescott would lead the field to green. Decker would grab the lead but Prescott would take back the lead heading into turn 3. Decker put his 72 on the cushion so hard that it nearly flipped the car on the opening lap but it stayed on four wheels and was able to continue after the first yellow flag of the event. On the restart, Andrew Kramer would make the bottom lane work and get passed Prescott for the lead but in 3 and 4, Kramer moved up to the top and allowed Jacob McConnell to get by for the lead. It would only take a hand full of laps for Baker and Lehmann Jr to move past both Kramer and McConnell to take command of the race. Later on Lehman Jr would fall to mechanical failure and that would put a hard charging Nate Freeland up to second. However none could catch Codie Baker as he would dominate the rest of the 20 lap event.

Big Jim’s Wicked Tees Mini Stocks would finish out the evening with 12 cars signed into the pit area. Travis Webster and Brody Amidon would win heat race events. Webster and Chris Hand led the field to Tony Van Pelt’s green flag. Off the start Webster grabbed the lead with Jason Ketrow and Josh Webster in close tow. Kenneth Evans would work by Chris Hand for 4th but then would succumb to pressures of Jason Warner, Ray Hyer, and Brody Amidon within a couple of laps. Danielle Thomas and Josh Snyder would battle for a top 7 position nearly 5 laps in as they try to work through the field. In heavy lap traffic nearly half way through, Ketrow and Josh Webster battled side by side for second. Ketrow caught the infield heading in turn one and would spin to draw the yellow. In the end, Travis Webster would pull away from the field and get his second victory of the year. Amidon and Hyer would get by Josh Webster to finish second and third. Jason Warner and Jason Ketrow would finish a strong 5th and 6th place at the end of the 20 lap feature.

Next weekend, Nikk L Brew will sponsor a special Non-Points event. 30 laps $1000 to win for both RUSH Late Models and Crate Sportsman. The Woodhull Warriors will run a 20 lap trophy race courtesy of Wayne Corcoran. Hobby Stocks, Street Stocks, Mini Stocks, and Front Wheel Drives are also on the card.