WOODHULL, NY – On the original schedule, the Lucas Oil Truck Pull was supposed to take place on Saturday July 25th however due to the pandemic, the management at the Woodhull Raceway decided to host a Non-Points Special thanks to the sponsorship of the Nikk L Brew.

Starting the evening’s feature events was the Woodhull Warriors with a 20 lap trophy race. The trophy donations were made possible by Wayne Corcoran. During the heat race, Levi Riley took his 00R way to the outside and ended up hitting the way which ended his evening early. Jacob Tubbs took the heat race win. but it would be Bradley Morseman and Marshall O’Brian leading the field to green. O’Brian took the lead from Morseman off of turn 2 and would lead lap 1 but Tubbs and Maddox Smith were in very close tow. O’Brian would get loose off turn 2 and that allowed Tubbs to take the lead on the top lane.

Smith would follow through to take away 2nd. O’Brian would spin in turn 4 but kept the car rolling to divert the yellow flag. The first caution would come on lap 4 after Jaden Stone spins off the back straightaway. On the ensuing restart, Smith and Morseman have a tough battle for 2nd that would come to a very short end as Stone’s car had failed in turn 3 which would draw the yellow. Smith had a problem as well, both cars were in the pit area for the rest of the event. On the ensuing restart, Tubbs was able to drive away from the rest of the field. Quite a few times, Morseman would challenge O’Brian for 2nd. All the while, Chelsie Harris held her line on through the middle trying to close in on Morseman. However Tubbs would get the victory over O’Brian and Morseman.

This was a special event for the RUSH Late Models as they would be competing for $1000 during a 30 lap feature event. A total of 19 cars packed the pit area with Brian Knowles, Kurt Stebbins, and Steve LeBarron taking home heat race victories to start the night. After the redraw it would be Steve LeBarron and Jason Knowles to lead the 18 car field to Tony Van Pelt’s green flag. Knowles would jump to the early lead with a fast LeBarron right on his back bumper. Clayton Tarabori moved up into third running right around the inner rim of the track.

LeBarron was able to get the topside working to his advantage as long as the race stayed green. Nearly half way through, LeBarron would put his Troupscreek Heating and Auto Parts number 29 on the extremely outside cushion and pull alongside Knowles for the lead. In the same corner, however, LeBarron would get loose and nearly take him and Knowles out of competition. The yellow would fall for LeBarron spun just off of turn 4. Kurt Stebbins was able to work by Tarabori for 2nd in the final stages of the race however no one could stop Jason Knowles as he would win the RUSH Late Model Special over Stebbins, Tarabori. TJ Downs finished fourth after starting in the top 5 and Alan Chapman ended up fifth after starting towards the back of the field.


The third special event was for the Crate Sportsmans as they ran for $1000 in a 30 lap feature. 26 cars filled the field with David Mayo, Dale Welty, and Kreg Crooker winning heat races. Kenny Peoples Jr and Noah Talada led the field to green with Peoples taking the lead off the start. Two drivers quickly made their way up through the pack. Bob Butcher who started 5th picked off both Mayo and Chris Clemens to put himself up to third. Butcher was not finished there was he was able to work the bottom of Talada to take over 2nd. Kreg Crooker was also on the move, putting his Dependable Disposal 51 on the topside of the speedway. Crooker would find himself up to 6th at the first yellow. As the race restarted, Peoples was able to pull away from Butcher. Carter Crooker slowly worked his way on the bottom to get around Isabel Barron for a top ten spot.

It would take a few green flag laps to get the tires heated up but AJ Costley made his presence known by getting past Kreg Crooker for 4th right behind Mayo. A tight four car battle for the runner-up spot now ensued. First, Crooker made the bottom lane work to get by Costley then Mayo was able to find a gap on the bottom side of turn 4 to get by Bob Butcher for 2nd. As Butcher was in the top lane, Crooker was able to slide by to take away third. The yellow at the half way mark would slow the field. As the field restarted, it would take quite a few laps but Costley was able to work by Butcher for 4th while Crooker and Mayo still battled for 2nd. Cole Youse was also able to work by Bob Butcher for a top 5 spot while Crooker was able to work by Mayo for 2nd. However all would succumb to Kenny Peoples Jr as he would win the 30 lap special.

The Mini Stocks had a 7 car field with John Hand Jr picking up the heat race win with Richard Harding and Kenneth Evans leading the field to the green flag. John Hand Jr quickly moved past Harding but it would be Jason Ketrow who would lead the opening lap. Evans fought hard to try and take back second from Hand but Hyer used the top lane to get by Evans for 3rd. In turns one and two, Hyer dived to the bottom and got back Hand for the runner up spot. Jason Warner moved past Kenneth Evans to put himself up to into the top 5. As the race raged on, Ketrow kept leading but Ray Hyer was able to catch the number 11 and use a lap car as a pick to make a pass for the race lead right before half way mark. Jason Warner continued to work on John Hand for 3rd throughout the race but Hyer would pull away from Ketrow to get his first win of the season.

Seven Front Wheel Drives would make their way to the High Banks. Codie Baker would take the heat race win while Carl O’Dell and Travis Southard lead the field to green. O’Dell led the field down the back stretch while Todd Mclain and Southard made a move to the outside to make it a three car battle for the race lead on the opening lap. Off turn 4, O’Dell would get loose and come down into Matthew Browning which would send him up the track and hit the driver door of Southard. However, all cars were able to keep the race under the green flag. Browning would lead the first two laps with Baker and Mclain on his back bumper. Baker would work the bottom lane on Browning and take the lead off turn two. Browning kept Baker in his sights by not letting him get too far away. Baker though would never look back and would win the 20 lap feature event over Browning. Adam Delgrosso was able to work by Mclain in the closing laps, after getting held up on the lap 1 incident with O’Dell, to finish 3rd.

The Street Stocks took to the speedway with 9 cars starting the feature event. Glenn Whritenour took the heat race win. In their 20 lap feature event, Whritenour would take the lead over Brandon Birdsall, Kurt Stebbins, and Brett Marlatt with Luke Boom in 5th. Stebbins worked by Birdsall on the bottom to take over 2nd. In the next few laps, Marlatt was able to work the extreme bottom lane to take away the second spot from Stebbins and that is when Stebbins went up to the cushion. Birdsall took a peek to the bottom side to get back by Stebbins but a caution would slow the field for the first time. On the restart, Marlatt tried to get by Whritenour for the lead but Whritenour seemed too strong in the Lightspeed Networks 15. Back through the pack, Stebbins tried to make the top side work however Brandon Birdsall, Luke Boom, and Austin Allen seemed to make the bottom lane work for the mean time as they continued to battle Stebbins top lane momentum all race long. In the next few laps, Marlatt slowed off turn 2 with a mechanical issue. At the same time, Sherman Gage also pulled into the field after losing a transmission on the track. On the restart, Birdsall gave Whritenour a run for his money but Whritenour picked up the win. Birdsall finished second, Stebbins rallied back for third while Boom and Mike Williams rounded out the top 5.

The Hobby Stocks finished out the evening with 17 cars taking to the speedway. Preliminary heat race events were won by Mike Spencer, Lee Bills, and Jeredd Dennis. Matt Sullivan and AJ Neidermaier led the field to the green flag. However off of turn 2, Sullivan would spin and collect Bill Williams while others had to take evasive actions to ensure no damage would be taken. On the restart, Neidermaier led Les Smith and Mike Carapella to the completion of the first lap. Carter Dennis worked the bottom side of the speedway to get by Lee Bills but Bills held him off for the mean time. Jeredd Dennis rallied from the restart and was working on his father Carter for a 5th place running spot. At the same time, Bills pulled alongside Carapell for 3rd. A caution near the halfway mark would slow the field. The restart did not shake up a lot of the field as Neidermaier was able to secure his victory over Les Smith, Lee Bills, Jeredd Dennis, and Carter Dennis.

Next week is a regular event and the King of the Bull Ring for the Insinger Performance Modifieds sponsored by Dgien Trucking. 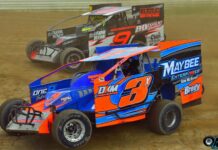 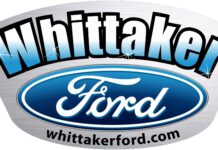