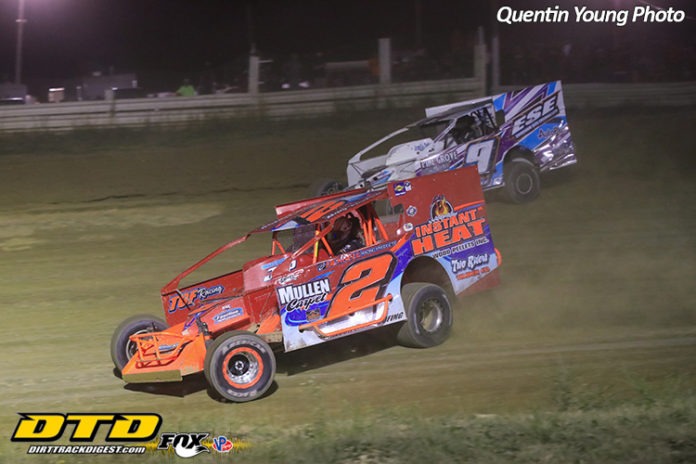 WOODHULL, NY – Dgien Trucking sponsored another great evening for the Woodhull Raceway with the King Of The Bull Ring set to go at intermission. The threat of rain loomed over the entire evening but race management pressed on to try and get racing action completed.

First on the board was the NAPA Crate Sportsmans. Tracy Dunn earned his first checkered flag of the season picking up heat 1, Ajay Potrzebowski and Kenny Peoples Jr would win the other two heat race events. For their feature it was David Mayo and AJ Costley led the field to green. Mayo would lead lap one quickly followed by Kreg Crooker and Costley. Art Goodier would follow Crooker underneath Costley to get position 3 in the early going but Costley would hold off Goodier to the first yellow. On the restart, Goodier got the run he needed to get past Costley for third. Connor Brown and Cole Youse fought for position 5 while Tracy Dunn was trying to make his presence known battling with Peoples and Potrzebowski for 7th. Danielle Thomas and Dylan Gilbert get together in a big crash on the front straightaway right in front of our race leaders. Both drivers were okay.

During the restart, Goodier got a big run on the restart to try and take over 2nd but Crooker held his car on the bottom to keep that spot. Meanwhile Peoples and Potrzebowski were racing hard for the 7th spot then it became a little too hard of racing. Both cars ended up being disqualified for their actions on and off the track. As the race raged on, Crooker was able to bide his time and make it alongside Mayo to take the lead with 7 laps to go. Crooker would pull away by a half a straightaway and cruise to his second win of the year over Mayo, Costley, Brown, and Goodier.

The Cummings Trucking RUSH Late Models saw 16 cars in the pit area with Mr Excitement Jeremy Wonderling and John Waters winning heat race events. Greg Mrzywka and Chris Fleming led the field to green but it would be a few cautions before we could get laps on the Border Drive Heating lap counter. As the field was able to get underway, Mrzywka led lap 1 but Jason Knowles was hot to trot on his back bumper while Fleming contended with Waters for 3rd. Mrzywka and Fleming took their cars to the extreme top of 1 and 2 which allowed Knowles and Waters to get by for first and third respectively. Wonderling was able to make his presence known by battling with Waters before the lap was completed. Mr Excitement used the bottom lane to get by Waters and Mrzywka to get himself up to second just as the rain started to fall for the first rain delay of the evening.

When the racing returned, Waters tried to take his number 11 to the topside, which worked in turns 1 and 2 but ended up nearly going up over top of 3 and 4. A yellow flag would slow the field but it would be the momentum that Waters need to get back by Mrzywka. Jim Buck who was having a great run in 5th ends up spinning in turn 3 and collects TJ Downs to draw the yellow. During the restart, Wonderling caught the infield tire which bunched everyone up coming off turn 4. LeBarron got by Mrzywka for 4th and Waters worked the bottom side of Wonderling to get by for second. In the end, Knowles was able to pull away from any challenge presented and pick up the win.


The Insinger Performance Modifieds had both Billy Van Pelt and Cory Costa winning heat races. During intermission, the drivers came out for the King of the Bull Ring Challenge. Joe Dgien, Billy Van Pelt, Cory Costa, Dayton Brewer, Donnie Lawson, and Ryan Tracy all win their round 1 races. Moving to the semi-final round was Joe Dgien, Billy Van Pelt, Donnie Lawson, and Ryan Tracy. Van Pelt narrowly won his 2nd round race against Costa when Costa slid him on the final corner but Van Pelt was able to cross back underneath him and win just barely by a nose. Joe Dgien and Ryan Tracy took to the track in their semi-final round. The two would battle side by side for the first lap with Dgien getting the momentum on the topside to take the lead on the final lap and edge Tracy by a couple car lengths to move on to the championship round. Next out, Donnie Lawson and Billy Van Pelt. Lawson started on the top and quickly went to the bottom. Both would battle side by side with Van Pelt running the middle on the first lap. Lawson tried to slide Van Pelt for the lead in 1 and 2 on the second lap but wasn’t able to keep Van Pelt back. Van Pelt would win by 2 car lengths to move on. Dgien and Van Pelt would come out for the championship round in a best of three to decide the winner. Van Pelt would win the first race with Dgien powering through to win the second race. In the final race, Dgien would edge out with the race lead off turn 2 but Van Pelt’s high side momentum would carry him to lead lap 1. Dgien would spin in turn 2 on the final lap, which led to Van Pelt becoming the first to win two King Of The Bull Ring Challenges since it’s inception in 2013.

The next event for the Modifieds would be their 25 lap feature. Ajay Potrzebowski II and Mike Bills would lead the field to Tony Van Pelt’s green flag. Potrzebowski takes the early lead while Donnie Lawson takes second away from Mike Bills. Cory Costa and Josh Keesey work their way up through the pack, taking third and fourth on the bottom away from Bills. Joe Dgien and Billy Van Pelt renewed their King of the Bull Ring race by battling side by side for sixth with only 5 laps in the books. Both drivers end up splitting Mike Bills to get by him for a top 5 spot. Van Pelt took to the topside of the speedway to power by Dgien for 5th and on the same lap, he was able to work by Keesey as well. All the while, Lawson has closed in on Potrzebowski for the lead but a stopped Sheldon Gardner at the top of turn 3 would slow the field for their first caution. Dgien just barely missed Gardner as the field was seeing the yellow flag. Back to green on lap 9, Lawson tried to get past Potrzebowski but did not have a lane accessible to do so.

Van Pelt was able to work by Costa for third and then Costa goes up to the top to try and seize the same grip. It only took one lap for Van Pelt to capture second place and then the lead away from Lawson and Potrzebowski at the half way mark. Costa was able to get the top side rolling to go three wide with Lawson and Potrzebowski for second. Lawson was able to pass Potrzebowski but it would be Costa getting by both drivers for the runner up spot. Van Pelt had a half a straightaway advantage over Costa and Costa would chip into that lead each lap. Van Pelt would be the first to the checkered flag but only by a car length over Costa with Lawson finishing in third.

The Joe Willcox Performance Automatics Street Stocks was fourth on the night schedule with 15 cars registering in the pit area. Brett Marlatt and Glenn Whritenour take heat race victories. Kane Stebbins and Brett Marlatt led the field to green. Stebbins took the early lead pulling Kurt Stebbins with him through the field. Kurt was able to work by his brother Kane for the lead on lap 2 while David Matwiejow took 3rd away from Marlatt. Matwiejow and Kane Stebbins took turn 3 a little wide which allowed Marlatt to get by both for second. It would only take 3 laps for Glenn Whritenour to make his presence known in the top 5 as he was knipping at the heels of Marlatt and Stebbins for second. Whritenour took to the high side of Marlatt and was able to make his way by. Mick Seeley worked his way by Kane Stebbins to put his 31 up to fifth from his deep starting position. Seeley arched the car through the middle of turn 3 and dove to the bottom of turn 4 to take away fourth from Matwiejow. As heavier sprinkles were being felt on the track, Kane Stebbins gets into the back of Matwiejow to cause a pileup in turn 1. During this time, the second rain delay would happen at the speedway. After a brief 5 minute pause and once the speedway was run back in, the racing returned. Glenn Whritenour was able to get the momentum on Kurt Stebbins to take away the lead. Marlatt fought off the likes of Dan Gardner and started working on Kurt Stebbins for second. Both Mick Seeley and Teddy Morseman worked their way from the back of the pack and fought for fourth. At the checkered, Whritenour would not be denied as he would pick up the win over Kurt Stebbins and Brett Marlatt.

All other features were canceled as more light rain kept falling on the track. The makeup races will be announced at woodhullraceway.com when they are scheduled. 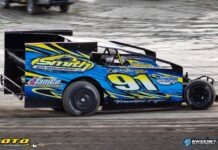 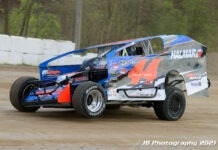 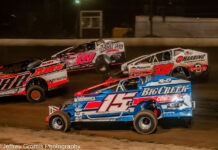