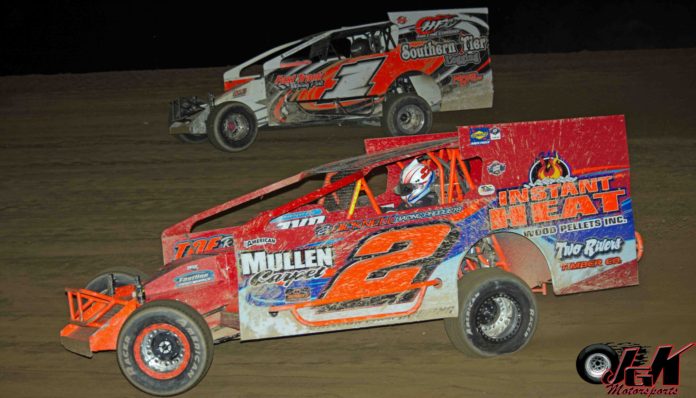 WOODHULL, NY – The night has come that most only dreamed about, Championship Night on the High Banks sponsored by High Up Trucking. Though the night wouldn’t come without it’s challenges, the threat of rain once again loomed over the Saturday night program with two makeup features yet to compete from the week before.

First feature to hit the track was the Big Jim’s Wicked Tees Woodhull Warriors makeup from Pizza N Stuff Night. They would resume action on lap three. Levi Riley takes the lead down the back stretch as he tries to pull away from Marshall O’Brian and Jacob Tubbs. Tubbs worked by O’Brian on the bottom and as Riley fought a tight race car, Tubbs closed in on his back bumper for the lead. Tubbs gets into turn 1 too quickly and catches the left rear quarter of Riley to spin them both around which draws the yellow. On the restart, Ethan Decker tried to get the jump which entangled himself and Jaden Stone. They were able to get apart but Stone had a right front flat and would not be able to continue. O’Brian still with the lead, as we stayed green, tries to hold back Bradly Morseman but it’s to no avail as Morseman takes command. O’Brian spins in turn 2 and loses two positions. Morseman though would hold on and get the win over Riley, Tubbs, O’Brian, and Blake Parsons. With their final feature being rained out, the makeup for to finalize their points will be on September 12th.

The Big Jim’s Wicked Tees Mini Stocks were up next for their Pizza N Stuff makeup feature. Off the drop of the green, Dylon Morseman grabs the leads and pulls away from Ray Hyer down the back stretch. Josh Webster gets around Tyler Houghtaling for third. Meanwhile Jason Warner, Travis Webster, and Jason Ketrow do battle for fifth. Travis Webster makes his way by both Ketrow and Warner then gets by Houghtaling to put himself into fourth. Josh Webster took advantage of Hyer’s loose car to try and work by. Hyer adjusts his line to the top side and keeps now both Webster brothers. Dylon Morseman who had led since the drop of the green, spins and catches the nose of Josh Webster which draws the caution on lap 7. Back to green, Hyer takes command with Travis Webster, Ketrow, and Warner in tow. Warner catches the rear of Ketrow and spins them both however they keep going so we stay green. This sets up a battle between Ray Hyer and Travis Webster for the lead. Webster would sling his Bucks Auto Works F7 to the top side and take over the lead from Hyer. Hyer tried to make a bid but Webster will come away with the win over Hyer, Josh Webster, Ketrow, and Morseman. With their final feature being rained out, the makeup for to finalize their points will be on September 12th.

The first championship finale race would be the Insinger Performance Modifieds. Billy Van Pelt and Joe Dgien picked up heat race wins. Mike Bills and Sheldon Gardner led the field to green. Mike Bills would jump out to the lead as Gardner would fight for second with Ajay Potrzebowski II. Potrzebowski is able to work by and has Dayton Brewer following in his tire tracks to take third from Gardner. Frank Dunning who was running fifth behind Gardner has a rear end issue in his Two Rivers Timbers 31 and stops at the top of turn 2 to draw the yellow. On the restart, Gardner slides up the banking and blocks the outside lane progression but does not stop Donnie Lawson and Brady Fultz from taking over fourth and fifth on the bottom. A second yellow would come out for Sam Allen spun around, Ron Cartwright Jr has a left rear flat during this yellow would see him going pitside.

On this restart, Brewer turns up the heat on Potrzebowski for second as Van Pelt gets by Gardner for sixth. Brewer moves up into second while Lawson works the bottom lane around Potrzebowski. Van Pelt also works his way up through to take over fourth. Cory Costa now is making his presence known as he works by Joe Dgien and Brady Fultz for sixth. Van Pelt puts his Instant Heat Wood Pellets number 2 on the cushion to work by both Lawson and Brewer to take second. As Van Pelt and Costa were in a tight points battle entering the night, Costa now is making his presence known as he works by Dgien, Fultz, and Potrzebowski for fifth. With only a hand full of laps to go, Lawson goes to the top side to work by Brewer for third. Cartwright slows at the top of turn four to draw the yellow with 4 laps to go. On the restart, Bills tries to do everything he can to hold back the Van Pelt machine. Off turn four coming to the white flag, Van Pelt went to the top side and grabbed just enough bite to get by Bills for the lead. Van Pelt would go on to win over Bills, Lawson, Costa, and Potrzebowski II. With the win, Van Pelt caps off the season with his 22nd Track Championship in the Insinger Performance Modifieds.

The Cummings Trucking RUSH Late Models were out next. Entering into the night, Jason Knowles was crowned 2020 Track Champion for his second championship as he had a considerable lead over his brother Brian Knowles. Heat race wins went Steve LeBarron and Greg Mrzywka. John Haggerty and Steve LeBarron led the field to Tony Van Pelt’s green flag. Haggerty would take command on the bottom side as LeBarron searched for speed on the top groove. Jason Knowles and Joe Layfield dueled it out for third with Greg Mrzywka back in fifth. Knowles was able to work by Layfield for third and closes in on LeBarron. John Waters makes a strong run up to fifth. A caution would slow the field. On the restart, LeBarron would get above the cushion and lose several spots. Layfield had a great restart as he was able to get back up to second. Waters was able to take the outside lane first and work by Layfield then Knowles follow in his tire tracks. This would put both Waters and Knowles on the back bumper of Haggerty. Haggerty was able to keep them both back for quite a few laps but Knowles was able to gain momentum on the top side to take the lead, with Waters in his tire tracks to also get by for second. Both Knowles and Waters put on a good battle for the lead but Knowles would end up with the win over Waters, LeBarron, Haggerty, and Brian Knowles.

The NAPA Crate Sportsman were out on the track next with Dale Welty, Tracy Dunn, Greg Crooker winning heat races. Aiden Grover and Blake Lawson led the field to the green. Grover would quickly pull away as Lawson had Ajay Potrzebowski and Art Goodier challenging him for second. Goodier was able to get the spot. Meanwhile Kenny Peoples Jr put his Micro Solutions 5K on the cushion to get around Bobby Peoples and Tracy Dunn for fifth. Yellow would come out for the first time on lap 3. Then a huge pileup would see the likes of Welty, Peoples Jr, Isabel Barron, Kreg Crooker and others involved on the restart. On the next restart, Dunn tried to make the top side work around Lawson but would end up losing a few spots on the top groove. Reese Hackett and Cayden Lawson began to show some strength in the top ten early on but problems would see them fading back. Grover, who has led since the drop of the green, gets passed by Goodier down the back stretch and would take control on lap 12. Yellow comes back out on lap 13 for Ben Feldman around in turn 4.

Back underway, Goodier pulls away from the field. Welty made his way up from the rear of the pack up to 7th. Lawson was able to slide past Grover to take second but would nearly stall the car. In an effort to keep it going, he went down the speedway but caught the rear bumper of Potrzebowski which would draw the yellow. As the field roared back to life, Welty made his way up to fourth right on the back bumper of Bobby Peoples and Aiden Grover. As Peoples was able to get by Grover, he would not be able to hold back Welty. Welty took over second however it would not be recorded as the yellow came out before they were able to cross the flag stand. Peoples Jr worked his way back up through the field and was able to work by AJ Costley for fourth. In the end, no one was able to catch Art Goodier as he would get his second win of the year over Bobby Peoples, Dale Welty, Kenny Peoples Jr, and AJ Costley. Ajay Potrzebowski and Dale Welty would be tied for championship points however Potrzebowski would win the championship by virtue of the tiebreaker with 3 wins.

For more information, visit WoodhullRaceway.com or Woodhull Raceway on Facebook.