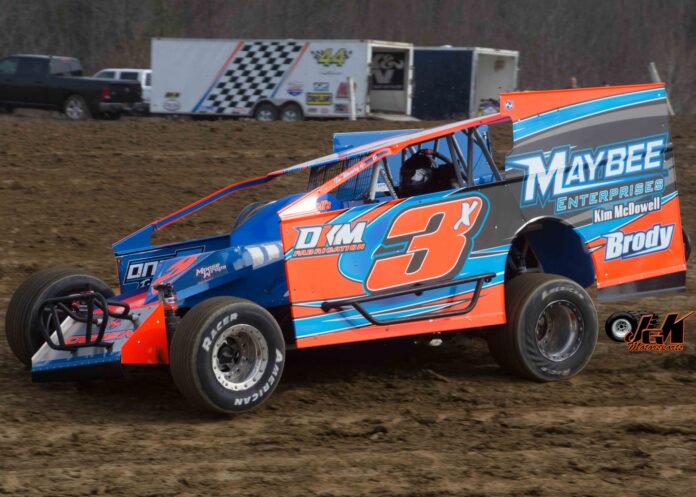 WOODHULL, NY – With 150 cars jamming into the pit area, the Woodhull Raceway was finally able to get their season opener into the record books after the previous week’s rainout.  The night of action was sponsored by Whites Repair and Towing Service of Westfield, Pa.

A full field of twenty-four Insinger Performance Modifieds took to the high banked one-third of a mile clay oval as Joe Dgien and his cousin Jake Dgien brought the field to Tony VanPelt’s opening green flag.

The dreaded yellow plaque slowed the pace for the opening laps with five caution flags slowing the event during the first ten laps one of which was for then race leader, Mike Bills who suffered a mechanical issue entering turn two jamming up the pack and eventually have a ripple effect throughout the field.  Besides Bills, Alan Rudalavage and several others suffered damage and retired for the night.  When things finally settled down and with the field sorting out, Joe Dgien distanced himself from the rest of the field with laps ten thru twenty-five run without any stoppages.  The only thing that slowed Dgien in his quest to pick up the win was heavy lap traffic which he did a masterful job of working his way around.  Bob Silvernail showed a lot of poise throughout the entire distance and kept Dgien within the cross hairs drawing within a car length in the closing laps as the two weaved thru lap cars, but as the checkered flag waved Dgien was able to take the win with Silvernail a close second.  Dayton Brewer lined up in the third row alongside Cory Costa, was able to avoid a lap five front straight away wreck which eliminated Costa and others.  Brewer drove a steady race and finished off the top three podium finishers.  Invader, Byron Worthing started in the eleventh row and wound up fourth at the finish.  After struggling in his heat race, Brady Fultz started nineteenth, took advantage of the early event cautions, moved nicely thru the field and would round out the top five.  Multi time Woodhull Raceway Track Champion, Billy VanPelt also had qualifying heat problems and started right behind Fultz on the opening grid and mustered up a seventh-place finish.

Brian Knowles and Steve Dixon brought the field to the opening green and like the Modifieds before then yellow fever was the name of the game in the early going with five cautions slowing the pace in the first half of the event.  On each re-start, Pork Chop Knowles would open a comfortable lead as MR. Excitement, Jeremy Wonderling was closing the gap as the leaders hit lap traffic.  Two more caution flags on laps twenty-one and twenty-three allowed Knowles to keep his potent Doug Gross Construction sponsored machine in clean air which proved to be the difference.  Wonderling kept Knowles within easy striking distance as the two entered lap traffic once again with a pair of laps remaining.  However, Pork Chop was able to hold off Mr. Excitement as the two separated themselves from JJ Mazur who very quietly nailed down third after starting fifth.  Jason Knowles lined up sixth, ran in the top five throughout and came home for fourth while Dixon drifted back in the late going, but still held on for fifth.

The NAPA Sportsman had a huge field of competitors sign in for the season lid lifter and the track management decided to allow all twenty-nine machines to take the opening green.  Unfortunately, things did not go so well as before one lap was completed, Bob Butcher found himself upside down right below the flaggers stand bringing out the first of what eventually would be two red flags during the scheduled twenty-five lap grind.  Another six caution flags from laps one thru twelve kept the field bunched as race leader, Josh Keesey would show the way from his front row starting position.  Keesey who started his career in the Sportsman Division made his way into the Modified Division for a few years, however with the high cost of fielding a front line Modified, Keesey made the decision to go back to his roots and the moved paid off in a big way on this night as he would lead throughout and claim his first feature of the season.  Like Dgien and Knowles before him, Keesey was good in clean air as track position played a huge factor.  Veteran driver, Dale Welty lined up alongside of Keesey on the opening green flag and would stay glued to Keesey’s rear bumper the entire distance to claim second at the finish.  Ted Morseman, AJ Costley and Ajay Potrzebowski Jr. would complete the top five finishers in the shortened event due to the number of caution and red flags coupled with impending rain showers that were looming. The second and final red flag came with just five laps remaining as Stacy Jackson found himself taking a nasty flip entering turn one after contact with another machine.  Jackson was able to exit his badly damaged car as the track officials then made a decision to shorten the event from twenty-five laps to seventeen.

With sprinkles in the air the show continued to be pushed along with the Woodhull Auto Parts Hobby Stocks taking to the high banks for their twenty-lap feature event.  By virtue of their qualifying heat race wins, front row starters Scott Brown and Jeredd Dennis would bring the twenty-car field to the green with Brown immediately taking the top spot.  With a handful of yellows keeping the field tight, Brown was able to hold Dennis and third place running, Mike Spencer at bay.  The lead trio opened a full straight away advantage and at the end that was how they would finish as Dennis and Spencer just could not find a way past the high-flying Brown.  AJ Neidermaier was able to hold off Carter Dennis as the pair would complete the top five.

The Johnson Auto Supply Front Wheel Drive feature was up next with no less than a handful of different drivers taking a shot at the lead.  Jacob McConnell would lead early but was overhauled by both Codie Baker and Adam Delgrosso and from there Baker would go on to win number one on the year as Delgrosso had to settle for second.  Garrett Wilson would complete the top three podium finishing positions with McConnell drifting back to nail down the fourth spot while Scott Lehman rounded the top five.

As the Big Jim’s Wicked Tee’s Mini Stocks were only on lap two of their scheduled twenty lap feature the rain intensified with the remainder of the program postponed.

Coming up next at Woodhull on Saturday, May 1, 2021 Kickin’ Country 105.3 FM in Hornell will present a Great 8 Show featuring a special thirty lap feature for the NAPA Crate Sportsman.  There will also be a Bed Sheet Banner Contest for the fans.

For all ticket prices and any changes in NYS Health Department protocol for fan admittance go to www.facebook.com/WoodhullRwceway/.

A complete list of the current points, the tentative 2021 schedule of events and other information is one click away at www.woodhullraceway.com.