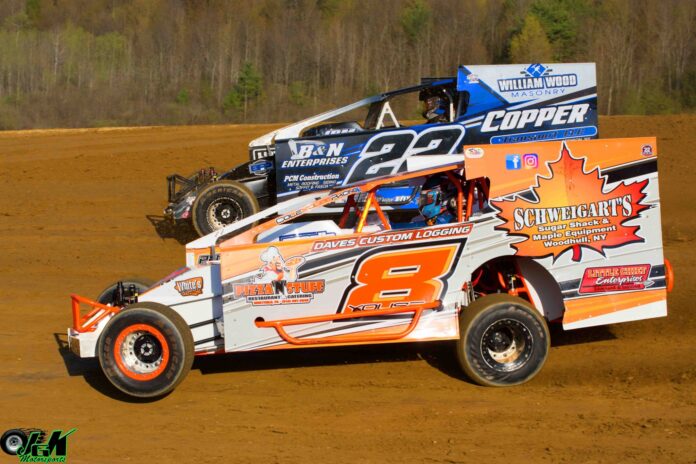 WOODHULL, NY For the second consecutive week the Woodhull Raceway played host to a packed pit area as some 134 machines representing the eight regular weekly classes of competition took to the high banked one-third of a mile clay oval.

In the nightly rotation the Insinger Performance Modifieds ran their twenty-five-lap feature first as the father/son duo of Mike and Brayden Bills brought the field to Tony VanPelt’s opening green flag.  Mike Bills would lead the first four laps before being overhauled by Cory Costa who would distance himself from the rest of the field.  A slew of early race cautions slowed the pace one of which was for leader, Costa as his car jumped out of gear and he coasted to a stop on lap seven.  From there Josh Nobriga took command and led throughout the remainder of the event slowed two more times on laps thirteen for Costa whose machine again jumped out of gear.  The final yellow came on lap fifteen and from there Nobriga had clear sailing to victory lane.  Behind him however the battle was furious between a slew of drivers all dicing for the second spot.  Eleventh place starter, Dayton Brewer was able to stay out of trouble throughout the first half of the event and worked his way into the runner up spot but was under heavy pressure from Mike Bills.  Costa, who had gone to the back twice was mowing the field apart and using the high side of the speedway to perfection as he was passing cars at will and with just two to go, he had already worked into the top five and was not done yet as he swept by both Ken Titus and Brewer to take over the second spot.  With Nobriga comfortably in front all eyes were on the battle for second and as the checkered flag waved Dayton Brewer was able to nip Cory Costa at line for the runner up spot while Ken Titus finished in fourth.  Mike Bills, who led early would race in the lead pack all event and rounded out the top five.

The Cummings Truckling RUSH Late Models were up next and pole position starter, Bad Brad Smith immediately shot into the early lead with outside front row starter, John Waters in tow.  Four cautions flags in the first five laps kept Waters glued to the rear bumper of Smith, but with the remainder of the event going non-stop, Smith was able to pull away from Waters and grab his first feature win of 2021 at the historic Steuben County speed plant.  At the finish Waters was a full two seconds behind Smith and claimed second as Chuck LaFleur quietly went about his business to round the top three podium finishers.  For the second straight week, Pork Chop Jason Knowles got the better of his brother Jet Jason Knowles as they finished fourth and fifth at the end of the twenty- lap feature.  For Brad Smith it once again showed his versatility in being able to handle any type of race car as he has a numerous machines in his arsenal for a multitude of different race divisions.

A full field of some twenty-five NAPA Crate Sportsman were originally scheduled to run a special thirty lap A Main event, however numerous yellow flags for everything from minor spins to bone jarring wrecks and one red flag to clear a blocked front straight away found Woodhull Officials cutting the event to twenty-four laps.  Bob Butcher and Kaiden Dgien brought the field to the opening green flag as Butcher would show the way for the first four laps.  On a lap five restart, Kenny Peoples Jr. powered his way into the lead and from there was never challenged for the reminder of the marathon.  Teddy Morseman who started twelfth and last week’s feature winner, Josh Keesey lined up fourteenth were able to stay out of the wrecks and finished second and third at the end.  Kaiden Dgien was able to hold on for fourth while Cayden Lawson would race in the top five throughout and came home for fifth after starting sixth.

Brett Crawford and Laverne Knickerbocker brought the Joe Willcox Performance Street Stock field to the opening green for their twenty-lap feature as Crawford immediately took control.  A pair of early race yellow flags kept Brett Marlatt within striking distance of Crawford and even two additional late race yellow flags allowed Marlatt a final shot at the win, but Crawford’s machine was glued to the bottom and was able to take a one car length victory.  Last year in the season ending Woodhull 100, the two Brett’s duked it out with Marlatt taking the century long win, but for Crawford his win on this night was a bit of redemption as the roles were reversed.  Kane Stebbins got the better of brother Kurt as the duo finished third and fourth while Teddy Morseman completed the top five finishers.

The Woodhull Auto Parts Hobby Stock Class was up next as Greg Young was able to convincingly take home his first feature in of the season.  Only one caution on lap eighteen slowed the twenty- lap event as Young was able to cruise to the win.  AJ Neidermaier began the event in eighth, put on a steady drive to claim second while tenth place starter, Mike Spencer followed Neidermaier thru traffic to take home third.  Jeredd Dennis lined up deep in the field and finished fourth as Clayton McClean would complete the top five finishers.

The Big Jim’s Wicked Tee’s Mini Stocks ran a pair of feature events on this night with the make up from last week’s rain out being taken by Jason Warner as he was chased across the line by Brody Amidon, Scott Lehman, Dylon Morseman and Rick Amidon.  In the night cap, Brody Amidon was able to make a late race pass of father, Rick Amidon to take his first feature win of 2021.  For the father/son duo it sets the tone for what could be many more family rivalries throughout the season as the pair have quality equipment and plenty of experience to run at the top of the class each week.  Another tough competitor in Ray Hyer chased the Amidon’s across the line while Jason Warner capped of a huge night by finishing fourth.  Jacob Tubbs would start fifth and that is where he would finish when the checkered flag dropped.

Adam DelGrosso put his many years of experience to good use in winning the twenty lap Johnson’s Auto Supply FWD feature event.  Nate Freeland soared into the early lead, but DelGrosso was able to methodically whittle down any advantage that Freeland had, took over the top spot, withstood a numerous caution flags and brought home his first feature win of the new season.  Opening night winner, Codie Baker put on another steady run to claim second as he was chased home by Garret Wilson.  Early race leader, Nate Freeland faded to fourth while Wesley Houghtaling would complete the top five.

Coming up at the Woodhull Raceway on Saturday, May 8, 2021 it will Salute to Fire, EMS and Law Enforcement Night all presented by a handful of police clubs and benevolence associations across the Steuben County Region.  Local Fire and Rescue squads throughout the region are encouraged to attend and bring along any fire apparatus.  Life Net Air Rescue 7-7 will make a landing at the Woodhull Raceway as part of the festivities with touch down scheduled for 4:30 pm.  DRONES WILL NOT be allowed air space around Woodhull due to the appearance of the choppers landing and subsequent takeoff.

For more information leading up to the event including any potential changes on COVID 19 quality control measures as well as up to the minute weather observations go to www.facebook.com/WoodhullRaceway.com/.

For all other information including the current point standings, rules, purses, sponsors, contacts and directions to the track log on at www.woodhullraceway.com.