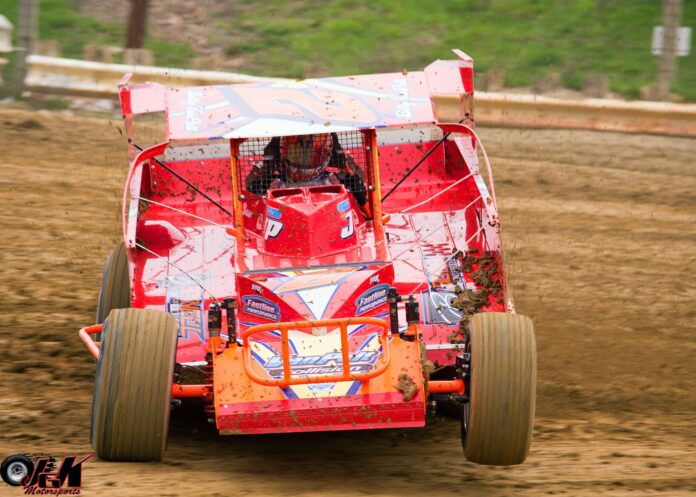 WOODHULL, NY – After last week’s rainout, fans and drivers alike were eager to get back to business at the Woodhull Raceway. Some 128 machines including twenty-one in the powerful Patriot Sprint Tour logged in for the night of action as Alfred State College was welcomed to the track as the nightly event sponsor.

With two weeks of nothing but problems, Billy VanPelt was able to put it all behind him and go onto his first feature win of 2021 at the Woodhull Raceway.  Veteran competitor, Dick Hess along with Sheldon Gardner brought the sixteen-car field to the opening green flag and Gardner would lead the first two laps.  VanPelt, who started fifth on the grid wasted little time in moving to the front as he assumed the lead on lap three and from there was on cruise control for the remainder of the twenty-five-lap affair.  Cory Costa and Mike Bills would start right behind VanPelt as both work their way thru traffic, but with only a pair of caution flags to slow the event had to much ground to make up on the high flying BVP.  Costa was able to clear Bills and get to second on lap eight and did have one caution on lap ten to put him on VanPelt’s rear bumper, but in the end BVP was just too strong and went on to the win.  Costa did finish in the runner up spot with Mile Bills claiming the final podium position.  Jake Dgien started the event in ninth and Donnie Lawson in the eleventh position as both would work their way thru the field to claim fourth and fifth at the finish.

The Patriot Sprint Tour made their first appearance at Woodhull as a star-studded field would compete in their twenty-five-lap feature.  Eric Kurtz and Jordan Thomas would bring the field to the opening green flag, but it was Davie Franek who started in the second row that would jump out into the early lead.  Franek would lead the first twenty-three before the ninth starting machine of The Cobra, Chuck Hebing would catch and pass Franek and go onto the popular win in his Wilkins RV sponsored number 45.  Franek would hold on for second chased across the line by Paulie Colagiovanni, Jared Zimbardi and Jordan Thomas would complete the top five finishes.

For a more comprehensive account of the entire Patriot Sprint show simply go to www.patriotsprinttour.com.

The Joe Willcox Performance Street Stocks produced a solid sixteen car field as a pair of Websters in Travis and Josh would lead the field to the opening green flag.  Josh would take the early advantage, withstand four caution flags which slowed the twenty-lap feature event and go onto his first feature win of 2021 at Woodhull.  Ted Morseman, who began the event in eighth, moved nicely thru traffic to claim the runner-up spot as he was followed across the line by Dan Gardner who lined up fifth at the start.  May 1 feature winner, Brett Crawford began the feature in the fifth row and with the help of the four yellow flags was able to keep the lead pack in sight to come home for fourth as he was chased across the line by Brandon Morseman.  With his feature victory, Josh Webster capped off a perfect night as he also won his qualifying heat along with Dan Gardner.

The NAPA Crate Sportsman had another good car count as some twenty-two machines lined up for their twenty- lap main event. Veteran drivers and first cousins, Tim Guild and Stacy Jackson brought the field to Tony VanPelt’s opening green flag with Jackson immediately asserting his muscle to take away the top spot with Guild in tow.  Jackson would lead the first six circuits as the event would stay green. Kreg Crooker, who has shown great strength wherever he competes in the early portion of the 2021 season assumed the top position on lap seven and would go onto claim his first feature win of the year. A pair of yellow flags on laps ten and thirteen would be the only thing that would slow Crooker has he able to win by almost a half track.  Tim Guild would race in the top five throughout the event and go on to claim his best finish of the season by nailing down second.  Early race leader, Jackson wound up fourth as he was sandwiched in between May 1 winner and fifth row starter, Kenny Peoples Jr. who claimed third while Dale Welty advanced seven spots to round out the top five.

The Woodhull Auto Supply Hobby Stocks continues to grow in numbers as nineteen machines took to the high banked one-third of a mile clay oval.  Dick Wallace would lead in the early going holding court at the top for the first five laps.  Jeredd Dennis began the event near mid pack and wasted little time moving into contention, cleared Wallace on lap five and go onto his first win of “21”.  Even five yellow flags, all during the first half of the twenty-lap event could not slow the high-flying Dennis as he had a near seven second lead over Wallace who would claim the runner up position.  Greg Young, who was the big winner two weeks ago once again showed his clout as he was third with opening night winner, Scott Brown giving chase in fourth.   Clayton Mclean would start along side Dennis on the opening green and advance to complete the top five.

The Big Jim’s Wicked Tee’s Mini Stocks along with the Johnson Auto Supply FWD both ran features only events on this night.

In the Mini Stock twenty lap feature go around it was Jacob Tubbs leading the first five circuits before giving way to Jason Warner who looked poised to back up his opening night win.  However, veteran racer, Ray Hyer had other ideas and moved around Warner on lap eighteen to assume the lead which he held till the double checkered flags waved. A disappointed Warner held on for second while being followed across the line by Ted Morseman and Rick Amidon who would claim third and fourth.  Tubbs, who led early drifted to round the top five finishers.

In the FWD drive twenty lap affair, attrition was the name of the game as the original twelve car starting field was whittled down to just four finishers as Garrett Wilson would pick-up his first win of the year.  Wilson would lead the entire distance as Nate Freeland made a late race charge only to come up short and had to settle for second.  Like Freeland, Codie Baker would start deep in the field, keep his nose clean and finish third followed across the line by Wesley Houghtaling and Nick Brown.

Like the Mini Stocks and FWD, the Big Jim’s Wicked Tee’s Warriors youth division also ran a feature only event with Levi Riley besting a nine-car field and remaining perfect on the season.  Bradley Morseman would lead the first four circuits before Riley moved around and went unchecked throughout the remainder of the twelve-lap feature.  Morseman would hold on for second as Ridge Cobb, Kayley Bacon and Keegan Smith would complete the top five.

Congratulations to all winners.

Up next at Woodhull Griffith Energy and the Elkland Moose will present the Annual George Williams Memorial with gates for the May 22 event opening at 4:20 and racing at 6:30 sharp.

For additional information including ticket prices, classes of competition, the nightly agenda and any weather-related updates go to www.facebook.com/WoodhullRaceway/.

For a look at all class rules, points, the complete 2021 schedule of events, track sponsors and directions to the facility log on at www.woodhullraceway.com.

The Woodhull Raceway is located 25 miles west of Corning, 25 miles east of Hornell, 25 miles south of Bath and 25 miles north of Wellsboro just off Rt. 417.

It’s the Greatest Show on Dirt at the Best Track in the Country, The Woodhull Raceway, New York’s Toughest Dirt Bull Ring. 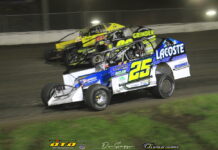