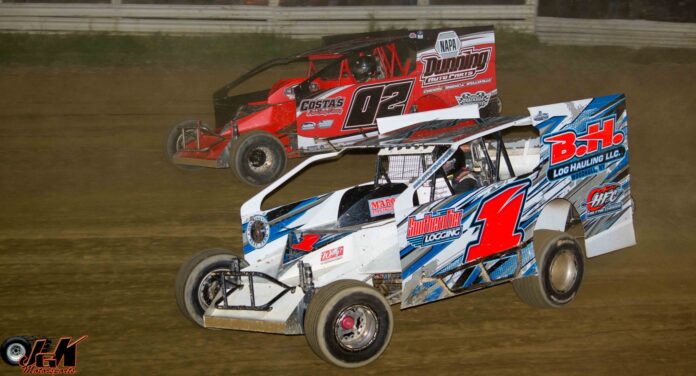 WOODHULL, NY – For the second consecutive week, 125 cars logged into the pit area at the Woodhull Raceway for the Annual George Williams Memorial.  Named in honor of Woodhull’s founding father, the George Williams Memorial drew a solid seventeen car field for the thirty-five-lap feature in the Insinger Performance Modified Division.  At the drop of the opening green flag veteran driver, Kevin Chilson led the opening five circuits before the ninth starting machine of Cory Costa powered around to take over the top spot.  Four caution flags slowed the pace during the first eight laps of the affair, but once things sorted out and the drivers settled in it was clear sailing until lap twenty-six when Costa’s half straight away lead was wiped out by a slowed machine on the speedway.  At this point Costa was clearly in control as last week’s feature winner, Billy VanPelt was having his hands full trying to clear the Josh Nobriga machine which he did on lap thirty.  But it was too little too late for BVP as Costa had too much of an advantage and came home for his first feature win of 2021.  VanPelt settled for a hard-earned runner up spot at the finish followed by Nobriga in third.  Brian Doolittle started the event in sixth, raced with the lead pack throughout and came home for a well-deserved fourth place finish with eleventh place starting Joe Dgien, advancing six spots to complete the top five finishers.

In the Cummings Trucking RUSH Late Models, Brian “Port Chop” Knowles made an inside pass with just two laps remaining over race leader, John Haggerty in their twenty-lap feature to pick up his second feature win of the season.  At the drop of the opening green flag, Haggerty jump into the early lead with only a pair of yellows to slow the pace on laps one and eight.  On each restart Haggerty was able to maintain the top position as Pork Chop Knowles was blowing thru the field from his outside row four starting spot passing cars at will.  Once catching the high-flying Haggerty, the two raced nose to tail for several laps before Knowles made his inside front straight away move at the two to go signal.  From there Knowles opened an immediate six car lead and cruised home for the win.  A disappointed John Haggerty held on for second as he was chased across the line by Dusty Waters who began the event in the last starting row and with only a couple yellow flags to help his cause came home for third.  Bad Brad Smith finished fourth while Kurt Stebbins rounded the top five after they started eleventh and ninth, respectively.

After last week’s NAPA Crate Sportsman feature that took a mere eleven minutes to run off, the going was a bit tougher this week as several yellow flags kept the pace slowed throughout the entire twenty-five lap grind.  Veteran driver, Tim Guild shot into the lead from his front row starting position and led the entire distance to claim his firsts feature event of 2021.  Guild was the class of the field has he maintained a comfortable distance between himself and second place finisher, Kenny Peoples Jr. who came from inside row six on the original start.  Jordan Bacon who started the event outside row two ran in the lead pack throughout the entire distance to finish in the final podium spot.  Blake Lawson bettered his brother Cayden Lawson by one position as they captured fourth and fifth.

The Joe Willcox Performance Street Stocks ran a make up feature to help kick-off the night of action with Ted Morseman coming home with his first win in the class in 2021.  Morseman, who does double duty on race nights also competing in the Sportsman Division was the class of the field as he cruised to the win.  He was followed across the line by earlier season feature winner, Brett Crawford, Brett Marlatt, Dan Gardner with Kane Stebbins crossing the line in fifth.

In the night cap Lance Baker took full advantage of an up-front starting spot to lead the entire twenty lap distance to claim the win.  Baker, had won on a single occasion years ago prior to heading into retirement, but with the encouragement of his grandfather he returned to action and made it worthwhile with the popular win,  It did not however come easy for Baker as he was dogged throughout the entire distance by second place running Kane Stebbins who tried everything to find a way around only to over drive the car into turns one and two late in the going, spun out and took Dan Gardner with him.  That moved the third place Josh Webster into the mix as he was looking to back up his win of last week, but with a surface that was locked down, passing was tough and Baker held on for the win with Webster in second.  Ted Morseman capped off a great night by following up his opening win with a solid third as he was chased across the line by Brett Marlatt and Glen Whritenour who rounded the top five.

The Woodhull Auto Supply Hobby Stocks were next to take their turn at bat as front row starter and veteran driver, Mike Carapella jumped into the early lead which he would maintain thru lap twelve when his machine loosened up enough for former Woodhull Track Champion, Carter Dennis to get by and from there went on to his first feature in of the year.  Son, Jeredd Dennis moved thru the field and caught up to his father but could not do anything with him as the laps wound down making it a Carter and Jeredd Dennis one/two finish.  Carapella was able to hold on to complete the third and final podium finishing spot as he was chased across the line by Mike Spencer and Brandon Conklin.

In Wicked Tee’s 4 Cylinder Mini Stock Rear Wheel Drive action Brody Amidon got around then race leader Jason Warner on lap six and cruised to his second win of the year.  Once out in front, Amidon pulled away from the remainder of the fourteen-car field winning by half a straight away over Warner who had to settle for second.  Father of the feature winner, Rick Amidon ran a steady race to claim third with Jacob Tubbs and Russell Morseman finishing fourth and fifth.

Mini Stock heats were claimed by Brody Amidon and Warner.

For the Johnson Auto Supply Front Wheel Drive Mini Stocks, it was yet another classic battle at the top of the heap.  Nick Brown led the opening six circuits before giving way to Wesley Houghtaling who wrestled away the top position and from there would go onto his first win of 2021.  However, it did not come easy as Codie Baker was slicing his way thru the field and caught up to Houghtaling and with just one lap remaining made a bold outside move coming to the checkered flag only to come up a half a car short settling for second.  Early race leader, Rick Brown finished in third followed by last weeks feature winner, Garrett Wilson who claimed fourth while Nate Freeland completed the top five.

Wrapping up the aggressive night of race action was the Wicked Tee’s Warrior Division where up and coming drivers have an opportunity to hone their skills in 4-cylinder machines. In an earlier evening make-up feature it was Ridge Cobb making a last lap pass of then race leader Levi Riley to claim his first feature win of the season.  Riley, who had won the two previous feature events had to settle for second followed by Keegan Smith, Bradly Morseman and Jade Stone in a class that features a mix of both young men and women competitors.

In the final feature it was once again Ridge Cobb taking home the hardware and, in the process, got out the broom and swept the night of action as Levi Riley again had to settle for the runner up spot as the pair were chased across the line by Keegan Smith and Bradly Morseman and for the second time during the night the top four finished in the exact positions in both feature events.  Marshall O’Brien rounded out the top five in the night cap.

The lone Warrior qualifying heat was picked up by Levi Riley.

After an exceptionally long night where ten feature events were staged including a pair of make-ups from an earlier season rainout, the capacity crowd did not go home disappointed as numerous different drivers were able to pick up their first feature events of the season.  A hefty $1,366 fifty-fifty awaited an elated Rose Silvernail.

Up next at Woodhull it will be the Annual Scott Dennison Memorial where the Joe Willcox Performance Street Stocks will run a special thirty-five lap, $1,000 to win feature event to see who can put their name on the Dennison Trophy.  Also, on the card it will be a regular show regular Great 8 Show featuring all of Woodhull’s weekly classes including a fifteen-lap feature event for the Youth Warrior Division.

For continual updates leading up to the May 29, 2021 event including ticket prices, gate and start times, running order and any weather-related issues go to www.facebook.com/WoodhullRaceway?/.

A complete look at the 2021 schedule of events, class rules and purses, sponsor and contact information log on at www.wooshullraceway.com.

The Woodhull Raceway is located 25 miles west of Corning, 25 miles east of Hornell, 25 miles south of Bath and 25 miles north of Wellsboro on CR 102 right of NYS RT. 417.

It’s the Greatest Show on Dirt at the Best Track in the Country, The Woodhull Raceway. New York’s Toughest Dirt Bull Ring.