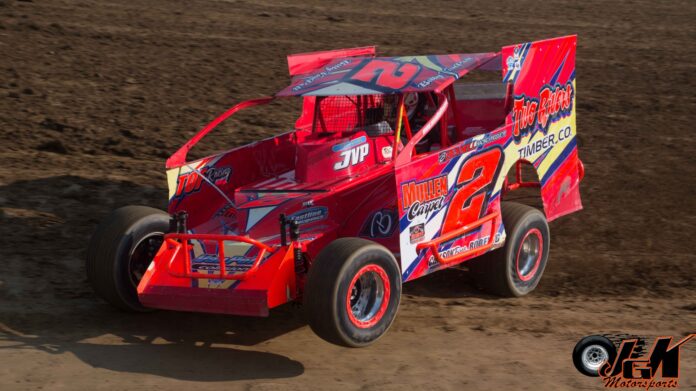 WOODHULL, NY – The Annual Jim Williams Memorial was safely tucked into the record books as a massive crowd was treated to a full thirty- minute, non-stop fireworks program in addition to a Great 8 Show consisting of some one hundred thirty -seven different competitors seeing action on the high banked one-third of a mile clay oval. Woodhull, NY based Schweigart’s Maple Syrup Products, Sugar Shack and Maple Syrup Manufacturing Supplies along with Louie’s Gun Shop of Bath and Outback Liquor and Wines of Canisteo were the nightly event sponsors with one lucky fan taking home the $3,850 winner’s share of the nightly 50/50 drawing.

After a sluggish start to the season, Billy VanPelt is now hitting his stride as he picked up his third Insinger Performance Modified feature event of the 2021 season. Brady Fultz and Dayton Brewer would bring the twenty- car field to the opening green flag and after leading the first ten circuits, Fultz looked poised to claim his first win of the year and was on cruise control at the head of the class. VanPelt was working his way towards the front from his seventh starting spot and on lap eleven cleared Fultz and assumed the top position. Seven caution flags thru the first dozen laps kept the field bunched, but with green flag racing the entire second half of the event, VanPelt was able to stretch his advantage to a full ten seconds over Fultz who had his best run of the year in the Herb Wright owned machine claiming second. Dayton Brewer ran in the top five the entire distance and took third at the completion followed by opening night feature winner, Joe Dgien while Cory Costa overcame earlier evening heat race problems, started the event in seventeenth and rounded out the top five finishers.

Jason “The Jet” Knowles has been finding more speed each week in his Cummings Trucking RUSH Late Model and in their twenty- lap feature event he was finally able to put it all together in picking up his first feature win of the 2021 season. Jim Buck, who has been showing steady improvement over the past several weeks brought the field to the opening green and led the first eight laps before giving way to the high- flying Knowles. With only three cautions flags slowing the event, Knowles was able to stretch his advantage to a full straight away and even a late race yellow on lap sixteen which placed Knowles brother, Brian Knowles on his rear bumper, “The Jet” was able to keep “Pork Chop” at bay and deny him a third trip to victory lane in “21”. With the Knowles Boys safely in the top two spots at the finish, early event leader, Jim Buck was able to hold off a fast- closing Steve LeBarron as the pair crossed the line third and fourth while Darin Horton would over come early feature issues to round the top five.

During the first half of the season in the Joe Willcox Performance Street Stocks, no one driver has been able to show any domination in the class with multiple feature winners thus far. In their twenty-lap feature Brett Crawford was finally able to break thru and back up his May 1 feature win and it was like turning back the calendar as Brett Marlatt dogged Crawford the entire distance. After dropped back to third at one point, Marlatt but was able to reclaim the runner-up spot as the double checkered flags waved with Glen Whritenour taking the final podium position after starting the event in ninth. May 15 feature winner, Josh Webster put on a steady drive throughout the distance racing with the lead pack to claim fourth as Dan Gardner took home fifth place money, advancing three positions from his eighth start spot.

Twenty-nine NAPA Crate Sportsman signed in for Jim Williams Memorial Night with the numbers whittled down to a field of twenty-four taking the green in their feature go. Ted Morseman, who does double duty running in two divisions on race night was able to shake off the gremlins that have plagued his Sportsman effort throughout the entire 2021 season. Even though a front row starting spot gave Morseman a tremendous advantage his win did into come easy by any means. No less than six caution flags would keep the field tight allowing Stacy Jackson to stay well within striking distance of Morseman, but like he did on opening night in his Street Stock victory, Morseman was able to maintain keep the lead and in clean air could pick and choose his lines and come home with his first Sportsman win of the year and making him the only driver thus far to claim two feature wins in two different classes at the track. Like Morseman, Stacy Jackson has had a year that he would love to forget with wrecks, flips and mechanical issues halting any chance of finding victory lane. Jackson was able to keep Morseman within striking distance the entire event and came home for a well-deserved runner-up position chased across the line by David Mayo, who like Jackson had his best finish of the year. June 12 feature winner, Dale Welty began the event in the sixth row, kept his nose clean to claim fourth while chased across the line by opening night feature winner and current point leader, Josh Keesey who rounded the top five.

The Woodhull Auto Supply Hobby Stock Division continues to grow in numbers with twenty-two machines checking in for the Jim Williams Memorial. Before the feature event would even see a green flag, current point leader, Jeredd Dennis machine came to a stop on the track ending his night before it even got started. Mike Spencer has been a picture of consistency all season long and took full advantage of his second row starting position to take home his first win of the year. Jesse Tuthill and Brian Beard brought the field to the opening green flag, but it was Spencer taking command and leading the entire twenty-lap distance. With only four caution’s slowing the event, Spencer was able to check out on each re-start and when the double checkered flags waved held off a rapidly closing Clayton Mclean who had to settle for second and was the first one to congratulate Spencer in victory lane. Opening night feature winner, Scott Brown began the event outside the third starting row, put on a steady performance to claim third while Brian Austin would follow Brown from start to finish in claiming fourth. Glen VanCise would overcome an early feature spin, drive thru the field, and take home fifth.

The standing room only crowd that was in attendance received a real treat when the Big Jim’s Wicked Tee’s Mini Stock feature would take to the Woodhull High Banks for their twenty- lap feature. Front row starter, Dylon Morseman looked like a sure bet to claim his first win of 2021 holding off all challengers and with only a pair of yellow flags to slow the event, Morseman ran a near perfect race keeping Rick Amidon, Jason Warner and others at bay. With the laps winding down and with parallel sticks in the air Morseman made the slightest of bobbles exiting turn two allowing Warner, Rick Amidon and Brody Amidon one last shot at the win. Going down the back straight Brody Amidon made a bold move on the bottom to clear both Morseman and Warner and take away the top position and from there he would hold on for the win by less than a car length over opening night feature winner, Jason Warner. A disappointed Morseman would hold off Rick Amidon as the two claimed third and fourth, respectively. Jacob Tubbs continues to impress and having started in the front row along side of Morseman, Tubbs was able to keep the leaders within range the entire distance to take home fifth in one of the more exciting finishes at Woodhull in recent memory. For Brody Amidon it was win number five on the campaign and his fourth in a row and in victory lane an obviously drained Brody Amidon could not believe that he had taken the win after but nothing but problems all night long beginning with his qualifying heat event.

In the Wicked Tee’s Warrior feature, Levi Riley once again showed his prowess in a 4-cylinder Mini Stock and like Amidon, he too claimed his fifth feature win of the season. In the twelve- lap feature that would go non-stop, Riley was able to get to the front in a hurry and cruise to a two and a half second win over Bradly Morseman who would take home second place honors. Keegan Smith led the charge of the next group across the line chased there by two- time 2021 feature winner, Ridge Cobb who claimed fourth as Marshall O’Brian would finish fifth. For Riley it was his third feature win in a row and four in the last five as he now stretches out his point lead heading into the second half of the season.

The final feature event of the night found the Johnson Auto Supply FWD machines taking to the speedway. Earlier season feature winner, Wesley Houghtaling would take the early advantage and lead laps one thru eleven before Adam Delgrosso made a power move around Houghtaling on the high side to take control. From there it was a classic battle between Delgrosso and car builder Cody Baker as the two distanced themselves from Houghtaling and the rest of the field and that is how they would finish as Delgrosso would take win number three on the season backing up his previous victories on May 1 and June 12. Cody Baker would hold on for second with Houghtaling third while Nick Brown and Blake Snyder would both put on great drives to claim fourth and fifth.

Up next at Woodhull the track will open the month of July with a Special NAPA King of the Ring one on one challenge event for the NAPA sponsored Crate Sportsman Division. In addition, it will be a Great 8 Show featuring all of Woodhull’s weekly classes of competition.

The July 3 show will have a trio of nighty sponsors including the participating NAPA stores in Addison, Bath, Corning, Hornell, Wellsville and Lawrenceville, Pa. Joining Napa will be The Addison Eagles along with S and D Pools.

Both pit and grandstand gates open at 4:30 pm with the first green flying at 6:30 pm.

For continual updates leading up to the event go to www.facebook.com/WoodhullRaceway/.

Rules, purses, the 2021 schedule, points and more log on at www.woodhullraceway.com.