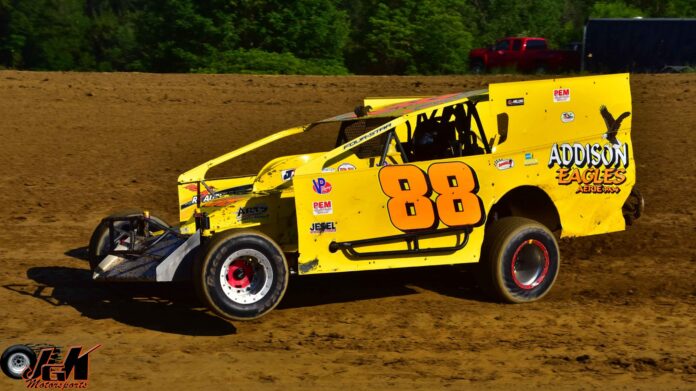 WOODHULL, NY – It has been a frustrating season at the Woodhull Raceway for Insinger Performance Modified driver Brady Fultz and his car owner, Herb Wright.  The combination paired together several years ago and have won at least one feature every year and are usually right in the thick of things. 2021 has seen Fultz contending for wins on numerous occasions only to succumb to mechanical issues.  But, on this night he and the team were able to put it all together in winning their first feature win of the season at the high banked one-third of a mile clay oval.  Bob Silvernail and Brian Doolittle would lead the field to the opening green, but it was second row starter, Dayton Brewer taking command in the early going from his inside second row starting spot. Fultz, who started along side of Brewer in the fourth slot would play the waiting game and after dogging Brewer for several laps was able to make the pass and go onto win number one of the year.  Five yellow flags would keep the pace slowed, however once out in front Fultz was able to keep all others at bay and claim the popular win.  Donnie Lawson would come home for second after lining up eighth on the opening grid while outside front starter, Brian Doolittle would race within the lead group throughout the entire twenty-five lap distance to round out the final podium finishing position.  Current point leader, Billy VanPelt piloting his car owner, Kevin Chilson’s machine over came early event issues to claim fourth while early event leader, Dayton Brewer would hold on to chalk up fifth at the double checkered flags.

In the companion NAPA Crate Sportsman Division Tim Guild took full advantage of his pole position starting spot to lead all twenty laps in claiming his second victory of the season after winning previously on May 22.  Guild and Kaiden Dgien brought the twenty-five-car field to the opening green flag with Guild taking command right off the start, withstanding one red flag stoppage and a pair of cautions in claiming the win.  Guild’s season has mirrored that of Modified winner, Brady Fultz as he too has suffered thru a season filled with breakages, crashes and bad luck.  Art Goodier lined up outside row two on the start and chased Guild throughout the entire distance to claim the runner-up position while Cayden Lawson would hold off brother, Blake Lawson to finish third and fourth, respectively.  Current point leader Josh Keesey, who started the event in twelfth put on a steady drive to round the top five.  The lone red flag of the event occurred on lap three as lady competitor Danielle Thomas had to be checked out by the rescue squad after being involved in a wreck with the good news that she was ok.  For third generation drivers Cayden and Blake Lawson along with father, Donnie Lawson in the Modifieds it was a huge night as the trio all raced to top four feature finishes in their respective classes.

In the Joe Willcox Performance Street Stock’s, Ted Morseman was able to back up his opening night victory by leading all twenty laps in taking the win. Caution flags on laps four and thirteen would slow the pace, but it was the final yellow on lap sixteen that made Morseman the most nervous as it bunched the field one final time and gave the second place running, Travis Webster one final shot at the win, but Morseman was up to the challenge and held on for the victory.  Travis Webster was able to hold off Josh Webster for second as Dan Gardner and Luke Boom would claim fourth and fifth.


In the Woodhull Auto Supply Hobby Stock Division some nineteen machines would check in for the night of action.  Glen VanCise has been right in the thick of things week in and week out in the class and after starting inside the third row he was able to take the top spot from then event leader, Leo Eldredge on lap twelve and take the victory and with it Vancise becomes the eighth different Hobby Stock feature winner at Woodhull in the eight feature events that have been staged at Woodhull in 2021.  May 1 feature winner, Greg Young continues to stay right in the thick of the point battle in claiming second while class heavy hitters Scott Brown and current point leader, Jeredd Dennis came thru the field to take down third and fourth.  Brian Austin advanced six positions from eleventh starting position to round out the top five finishers.

In the special thirty lap Johnson Auto Supply Front Wheel Drive A Main event, the green to checkered, non-stop feature came down to the two top point getters in the division as Codie Baker was able to hold off Adam Delgrosso by less than a second in a real classic between the two.  Ryan Austin would lead in the early going from his pole position starting spot before being overhauled by one-time 2021 feature winner, Wesley Houghtaling who led thru lap thirteen when Baker would take control of the top spot bringing Delgrosso right along with him.  From there Baker would go on to win number three on the season tying him with Delgrosso in the feature win category and maintaining his ever so slight point advantage.  Nailing third at the completion was Houghtaling while Nick Brown and Scott Lehman Jr. would complete the top five.

Brody Amidon continued his domination in the Big Jim’s Wicked Tee’s Mini Stock Division and after trailing his father/mentor, Rick Amidon for the first half of the twenty-lap affair moved around and went on to win number six and his fifth straight in the class. Like the Front Wheel Drive’s, the Mini’s also went non-stop with Jason Warner coming from dead last to chase both Brody and Rick Amidon across the line.  Dylon Morseman and Josh Snyder both had good runs to complete the top five.

In Wicked Tee’s Warrior 10 feature only ten lap action Levi Riley made it four in a row and six total for 2021 with another win over the only other youngster to pick up feature wins this season as Ridge Cobb followed in second.  Brady Morseman, Keegan Smith and Jaden Stone completed the top five.

The Cummings Trucking RUSH Late Models had the night off and will return to action on July 17.

Congratulations to all competitors in every class.

Up next at Woodhull on July 17, it is the Annual Christmas in July Bicycle Give Away as the New York State Stock Car Association as well as the Addison Eagles will be onboard to sponsor the Great 8 Show.  Also, the Addison, Bath, Corning, Hornell and Wellsville and Lawrenceville, Pa. NAPA Stores will present the NAPA Crate Sportsman King of the Ring which will be made up from an earlier season rainout.

For continual updates leading up to the July 17, 2021 event go to www.facebook.com/WoodhullRaceway/.

Car counts are based on nightly sign in, not on how many cars compete in the feature events. 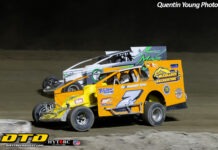