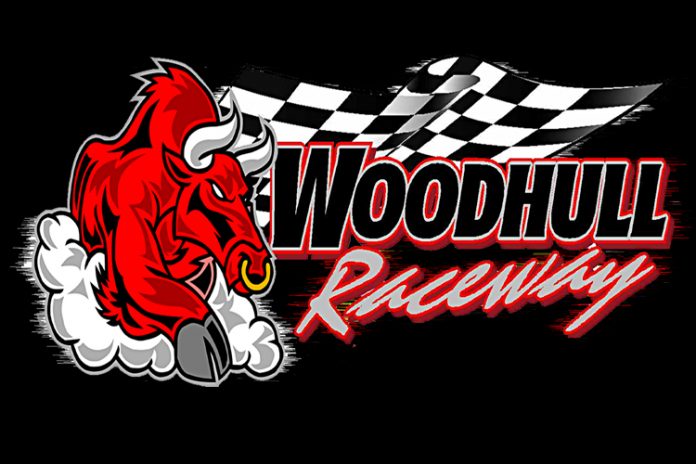 WOODHULL, NY – After several weeks off due to rain and the Lucas Truck and Tractor Pull, racing action finally resumed as the Woodhull Raceway wrapped up the month of July 2021.  The track ownership decided that new clay was desperately needed particularly with the upcoming STSS event set for August 10 and laid down over 600 tons of the red stuff and it made for a prefectly smooth racing surface with grooves from top to the bottom on the highly banked one third of a mile oval.

A trio of nightly sponsors in Dgien Trucking, the New York State Stock Car Association and Lamb and Webster would be onboard to greet feature winners in victory lane.

Like most teams, Ryan Tracey’s operation is a family owned, one car one engine program.  He had missed several races early in the season, however when he did finally arrived he has been fast.  Tracy lined up on the hammer in the Insinger Performance Modified twenty-five lap feature event and led in the early going.  Woodhull’s winningest Modified competitor, Billy VanPelt blasted into the lead on lap three from his sixth starting spot and began to pull away from the field to the tune of a half a second per lap.  With BVP in control and into heavy lap traffic all eyes were on a spirited battle between Tracy, Ryan Susice and Joe Dgien for second place.  In what everyone envisioned as another VanPelt win abruptly ended on lap twenty-one as his lead and sure victory ended with a flat right rear tire bringing out the only yellow of the event.  With just four laps remaining Tracy was now back on top, but he had heavy pressure from both Dgien and Susice with the two veterans were all over him like a cheap shirt as the pair were working multiple lanes to get to the lead.  With the white rag waving and still no clear- cut winner, both Dgien and Susice tried to split Tracy going down the back straight, however with the huge crowd on their feet Tracy held his lane which he had worked to perfection all race long and came home for his first win ever in Modified competition after graduating from the Crate Sportsman Division several years ago.  Joe Dgien who won the season opener had to settle for second while Susice took home third place money.  Second generation pilot, Brian Doolittle was closing in rapidly on the battle for the win with his performance netting him a well deserved fourth place finish and let the record show the difference between first and fourth was less than a second.  I believe it’s called a “Blanket Finish”!  Donnie Lawson began the event in fifth and that’s right where he finished at the completion of one of the better Modified feature events at Woodhull in recent memory.

Isabel Barron has been a fan favorite at the track since she moved from the go-kart ranks into the NAPA Crate Sportsman Division.  After picking up her first ever feature in a few years ago in the Crate Sportsman ranks she is considered as one of the more consistent drivers in the class, but don’t let this young, attractive looking blond fool you, she carries a heavy right foot and means business.  After nailing a feature win earlier in 2021 at The Hill Raceway she has been carrying a ton of confidence and she was able to withstand a yellow flag infested feature event that was chopped from the customary twenty-five laps to twenty for her first “W” of the season at Woodhull.  Kaiden Dgien jumped into the lead from his outside front row starting spot and led the way for the first dozen laps which included seven stoppages due to caution flags.  Barron, who lined up eighth on the starting grid was able to methodically work her way into second place and on the lap eleven restart was able to take over the top spot and after four more slow downs, cruised to the popular win.  David Mayo has been rock solid since taking over the driving chores of the Tim Guild owned machine and after starting in the third slot came up a few car lengths short and had to settle for second place at the double checkered flags.  Art Goodier began the event in the fifth row, stayed out of trouble to claim third while early race leader, Kaiden Dgien wound up fourth with Ted Morseman coming from deep in the field to round the top five.

Jason Knowles went back to basics over a month ago after struggling mightily with his Cummings Trucking RUSH Crate Late Model chassis setup and the adjustment has paid off with back-to-back trips to Woodhull’s victory lane.  Jim Buck shot into the early lead as his performance has really picked up since the start of the year and he led the first four circuits before being overhauled by Jet Jason Knowles who took command on lap five and from there it was game over.  Knowles would have to deal with only three cautions which would bunch the field but on ever restart he would drive away from the field and at the finish he would better his brother, Brian “Pork Chop” Knowles by a full second and a half.  The Knowles Boys began the twenty-lap event side by side in row four, but it was Jason getting to point first and claiming the win.  Chuck LaFleur began the event in the eleventh slot and without the help of many caution flags drove through a stacked field to take home third place money while Darin Horton drove the high road home for fourth as Jason McGregor would recover from a lap nine caution to round the top five.

Jeredd Dennis was the point leader heading into the Woodhull Auto Parts Hobby Stock feature for good reason as he has been nothing short of perfect consistency through the first half of the season.  Lining up sixth for the twenty-lap feature, Dennis was licking his chops as this was his best starting spot in numerous weeks due to the new handicap system instituted into the rules for 2021.  Dennis wasted little time in getting to the point as he took over the lead on lap five after Leo Eldredge had led from the opening green flag.  In an event that was only slowed three times due to caution flags, Dennis was able to pull away from the field and go onto claim his second win backing up his May 15 victory.  Eldredge would hold on for second, but the real drive of the night came from Joe Birdsall who in his first night of competition in a brand-new car drove from eleventh, thru a tough field to claim the third and final podium position.  Greg Young would start fifth and advance one position to claim fourth while June 26 feature winner, Mike Spencer rounded out the top five.  With the Jeredd Dennis victory he becomes the first repeat winner of the 2021 season.

Mick Seeley is without question the nicest guy in the pit area and every driver will tell you that.  After suffering thru engine woes several weeks ago, Seeley looked poised to pick up his first feature win of the year in the tough Joe Willcox Performance Street Stock Division. With fresh power between the rails, Seeley would jump into the early lead from his pole position starting spot.  After three caution flags before the first lap could be completed, things would settle down as Seeley lead thru the first sixteen laps, but it was the final caution on lap fifteen that was Seeley’s demise as his half a straight away advantage was wiped out putting Lance Baker on Seeley’s rear trunk lid.  Baker would find enough grip to move past and take command on lap seventeen and go onto his second feature win of the year with a disappointed Mick “The Quick” settling for second.  A heavily contested battle raged throughout the entire event as current point leader, Ted Morseman was able to hold off two other class heavy weights in Brett Crawford and Brett Marlatt as the trio would finish third thru fifth respectively in a real slug fest.

Whenever Ray Hyer has showed up at Woodhull in the Brian Grant owned machine, he has been dominant having won previously in their only start on May 15.   Coming into the Big Jim’s Wicked Tee’s Mini Stock feature event Brody Amidon was on a five-race winning streak, but after succumbing to mechanical woes early in the event, Hyer was able to cruise to his second win of the season coming from dead last not once but twice after being swept up in an early event caution.  Jeff Stone began the feature in the third spot and came home in the runner up position for his best finish of the season.  Like Stone, Justin Horton also had his best run of the year claiming third while Richard Harding and Russell Tubbs would round out the top five finishers.

The Johnson Auto Supply FWD’s would round out the night of feature action in a green to checkered twenty lap feature go as Wesley Houghtaling would move from fifth to the lead on the opening lap and cruise to his second feature win of the season.  For the second-generation driver it was a well-deserved victory as he held off the top two drivers in the division as Codie Baker was able to better his number one nemesis, Adam Delgrosso as they finished second and third while earlier season class feature winner, Garrett Wilson took home fourth. Nick Brown would start fourth and finish fifth at the double checkers.

In early evening Wicked Tee’s Youth Warrior fifteen lap feature action, Levi Riley stretched his winning streak to five and seventh overall as the Addison, NY high school student took over the top spot early on and pick up the win over two-time 2021 feature winner, Ridge Cobb as the pair have dominated the class thus far.  First time entrant, Zain Harvey came from the back twice to finish third while class regulars, Keegan Smith and Bradly Morseman would finish fourth and fifth.

Up next at Woodhull it will be a regular Great Show on August 7 as Pizza N Stuff along with Dave’s Custom Logging will sponsor the event.

The Short Track Super Series will invade Woodhull on Tuesday, August 10 along with a STSS 602 Crate Sportsman tour event.  The Woodhull Auto Supply Hobby Stocks will round out the card in a must-see event which will be televised on Flo racing.

As always for continual updates leading up to all events at Woodhull go to www.facebook.com/WoodhullRaceway/.

Car counts are based on how many drivers registered at the beginning of the night, not on how many race in feature events.