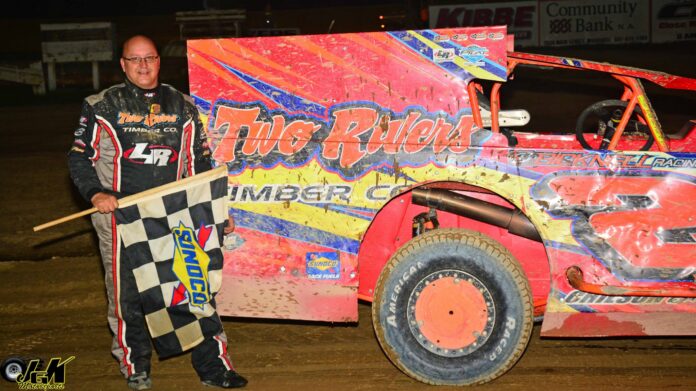 WOODHULL, NY – The 17th running of the Lyle Sherwood Memorial finished off the 2021 season for the Insinger Performance Modifieds at the Woodhull Raceway and as he has done multiple times in the past Billy VanPelt was able to take home the trophy and check for winning the Annual Sherwood Memorial Event.

With the draw/re-draw in effect for post season racing Cole Youse, who was celebrating his seventeenth birthday along with VanPelt would lead the eighteen-car field to the opening green flag with BVP immediately jumping into the lead which he would never relinquish for the entire thirty-five-lap distance. Only a pair of caution flags would slow VanPelt’s blistering pace with those coming on laps thirteen and seventeen. In both cases, Donnie Lawson stayed close to VanPelt’s rear bumper, but could never mount a serious challenge to the recently crowned Woodhull Track Champion.

“My stuff is tired stated Lawson in his post-race interview. This team is on a very limited budget, and we just don’t have the resources to purchase parts like we need to. I have a slightly bent left rear axle tube which caused the brake to drag and that obviously slowed me down. The rear tires have to many laps on them, but we didn’t want to spend the money for new this late in the season as this is the last event of the year at Woodhull. All in all, I’m very satisfied with our effort and it’s a good way to complete the season.” Lawson started the event in the fifth slot.

“My family purchased this DKM chassis last year and we continue to find speed. Tonight, I was very happy with our run even though I would have liked to win. I grew up as a little kid admiring Lyle Sherwood and it’s a real honor for me to have the number 17 on the side of my car.” That according to Brewer who began the thirty-five-lap affair in the eighth starting spot and rides the momentum of second and third place finishes in the last two Woodhull events going into the offseason.


For VanPelt it was another dominating performance after inserting fresh power into his Bicknell his past week.

“This was an older 390 cu. In. engine that we ran before. We put it in the car and it worked to perfection. It is real honor for me to have once again won the Sherwood Memorial as Lyle was such a great guy and an awesome racer. With having the Fonda 200 Guaranteed Spot that goes along this win with it will make our life a lot easier when we go there. We planned on going regardless, but now we are locked in.”

For VanPelt it was win six on a season that started with a slew of mechanical issues in the early part of the year, but he and his team were able to rally by mid-season and dominate the latter part of the 2021 campaign.

Chasing Lawson and Brewer across were Jake Dgien and last weeks feature winner, Brady Fultz who began the event in ninth and eleventh respectively.

In the companion NAPA Crate Sportsman Division, Stacy Jackson jumped into his cousin Tim Guild’s backup machine and totally blistered the field in a green to checkered flag run that found him rolling into victory lane with a flat left front tire. For the Woodhull, NY veteran it ended a season that was littered with nothing but problems and bad luck including blown tires, mechanical issues, flips and blown power plants. Jackson also used the same machine to run in with the Modified Lyle Sherwood Memorial and with perhaps the added track time made the necessary tweaks and was perfect in the non-stop twenty-five lap feature go.

“My regular ride is whipped, claimed Jackson and Tim was good enough to put me in his back-up car. The thing is flawless and it was so easy to drive. It is great to be back in victory lane again”.

Guild himself had a solid run going running second to his teammate and eventual winner but began a bit of a back slide in the late going winding up sixth at the double checkers. Finishing in the runner up spot a straight away back was Kenny Peoples Jr. who began the event in the seventh slot and was hoping to extend his three-race win streak, but without the help of any caution flags had to settle for second place. After a nice runner-up finish by their father, Donnie in the Modified feature event, brothers Blake and Cayden Lawson finished the event in third and fourth making it a great night for Team Lawson while lady competitor, Isabel Barron was back in her family-owned ride to take home fifth place money after lining up along side of Peoples Jr. in the fourth starting row.

In what is to be considered a tune up event for next Saturday’s 100 lap Street Stock event, Brett Marlatt laid down the gauntlet that he will be a force to back up his 2020 Woodhull 100 win as he was able to hold off both Josh Webster and Glen Whritenour in a three car break away to win his second Joe Willcox Performance Street Stock feature of the 2021 season. A lucky thirteen machines took the opening green with Marlatt taking control on lap one and never looking back. With only one caution flag slowing the pace Brett the Jet hit his marks to perfection making it difficult for either Webster or Marlatt to mount a serious challenge. A disappointed Josh Webster claimed that he will not be able to compete in next weekend’s 100 lap grind due to work commitments, however Whritenour was quite pleased with his performance after having only competed at Woodhull a few times during the year, rather focusing his attention on winning another track title at Outlaw Speedway.

“I liked the way the car performed tonight and learned some things for next weeks 100 lap event, stated GW in his post-race interview.

In the Cummings Trucking RUSH Crate Late Model feature event, newly crowned class Track Champion, Brian Knowles led all twenty laps to win, however it did not come easy as a failed front end suspension prior to the half-way mark forced Knowles to slow his pace and fight an ill handling machine to the double checkers and while crossing the scales the front end collapsed and he was towed to victory lane.

“I’ve won a lot of races, but I don’t think in was ever towed to victory lane, stated an elated Port Chop Knowles. Something broke on about lap seven and from there it was handful, but I was able to hold on and when I was heading for the scales it finally let go. I’m very lucky to be here”.

It was win six for Knowles on an abbreviated season for the Late Models which saw four different winners visit victory lane throughout the season. Steve LeBarron, piloting a different car on this night appeared poised to take the win away from Knowles on the last lap, but a slight miscue between turns three and four coupled with a slowing Knowles machine coming for checkered spoiled his attempt to nail the win. Chuck LaFleur would wind up in second place after a steady drive from his third place starting position while Jason McGregor would recover from an earlier spin to claim the final podium finishing spot. Tony Kelley and Jared Keeney would complete the top five.

In the Big Jim’s Wicked Tee’s Mini Stock Open, invader Brad Delamater returned to action in 2021 after a thirty year lay off and found his lone trip to Woodhull this season very much to his liking as he was able to keep Mike Stone and track regular Rick Amidon at bay in winning the thirty-lap feature open special. Only a pair of yellow flags would slow the event where class rookie, Jacob Tubbs would cross the finish line in fourth while Jeff Stone put on a steady drive to round the top five.

In Johnson Auto Supply FWD twenty lap feature action, Ryan Austin claimed his second trip to victory lane in “21” after making a lap ten pass of then leader, Nick Brown to take command and cruise to the win in the caution free event. Austin’s last win came on August 28 and after a disappointing meeting with the front straight wall last week while competing for the win, he was able to bounce back and take the victory. Brown, who led the first half of the event had to settle for second at the completion as he was followed by Preston Cobb, Joseph Gillespie and Carl O’Dell who completed the top five.

In early evening Wicked Tee’s Warrior feature action, Ridge Cobb of Coudersport, Pa. completed the 2021 season by winning the event and making it three in a row to wrap up the Warrior campaign in convincing fashion. In the finale it was Bradly Morseman claiming second while Marshall O’Brian and young lady competitor, Kaleigh Morseman would take home third and fourth. 2021 class Track Champion and nearby Addison High School student, Levi Riley has moved onto NAPA Crate Sportsman action where he will compete full time in the upcoming 2022 season.

Schweigart’s Maple Syrup Products and Sugar Shack of Woodhull will join forces with Joe Willcox Performance Automatic’s of Westfield, Pa as they co-sponsor the final event of the year at the historic Steuben County facility on Saturday, September 18, 2021.

On the card it will be the Annual Willcox Performance Woodhull 100 for the Street Stocks along with the Woodhull Auto Supply, Billy Joe Birdsall Hobby Stock Memorial with both feature events paying massive purses and thousands in lap money. More details can be found on the tracks Facebook.

Also, in competition it will be the NAPA Crate Sportsman along with the Cummings Trucking RUSH Crate Late Models as well Open events for the Mini and FWD Divisions.

For all the information you need heading into the season finale at the track including any weather-related matters as well as the nightly agenda go to www.facebook.com/WoodhullRaceway/.

For a look at all the class rules for the open shows along with the final point tally for the weekly divisions, sponsor information and directions to the facility log on at www.woodhullraceway.com.

Tentative plans call for the Annual Woodhull Raceway Banquet to be held right at the track on Saturday, October 2, 2021. A full story will follow in what is anticipated to be a social gathering at 11:00 am followed by a buffet style meal at noon and awards to follow with the top point finishers in each division accepting their accolades. Complete details will be posted on the tracks Web Site and Facebook including ticket prices.

Car counts are based on how many drivers register, not how many run in the features.