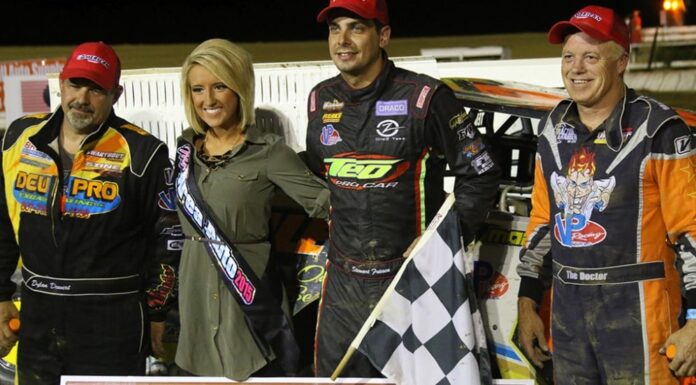 With a successful career in the Amateur Division where he was a former Woodhull Raceway Track Champion, Dewert had a brief stint in the Late Model Division at the former Dundee Speedway (Outlaw Speedway) prior to making his mark in the Modified Division at both Woodhull and Black Rock (Outlaw) Speedways along with several other venues across the region winning multiple feature events.

In addition to his success as a driver, Dewert was also a gifted fabricator having built numerous chassis for the likes of Super Stock Track Champion, Larry Knowles along with Dewert’s good friend and fellow Modified driver. the late Lyle Sherwood just to name a few.

Operating Dewert Speed, Dylan Dewert was the local parts dealer handling all the top name parts and accessories as well as an American Racer Tire and VP Racing Fuels Dealer.

After retiring from the sport several years ago as a speed shop owner, chassis builder and driver, Dewert found solace in owning and fabricating street rods and muscle cars where he and his wife, Rhonda enjoyed their time attending car shows and rallies. However, he continued to lend his chassis set up expertise to any driver that needed assistance.

Prior to and during his illness, Dewert was the acting Town of Corning, NY Highway Superintendent where his career spanned over thirty years beginning as a laborer, truck driver and heavy equipment operator before his tenure as Superintendent.

Several years ago, Dewert and the Town of Corning were highlighted in a full- length story in the New York State Town and Highway Superintendents monthly publication.

After stepping away from Motorsports, Dylan Dewert began his own construction company, Dew Pro Excavating where he worked nights and weekends doing small site work projects for both residential and commercial clients.
The past few years have found him working side by side with his wife, Rhonda in constructing a huge addition onto their Corning, New York home.

His racing resume includes Modified feature wins at Black Rock Speedway (Outlaw Speedway), Woodhull Raceway and his two biggest Modified victories coming at the Little Valley Speedway where he won the last two Modified Special events prior to the tracks closing and by his own account his two most major accomplishments in racing. In addition, he was the first ever feature winner in the T3 All Star Series for 358 Modifieds touring group staged at the Black Rock Speedway (Outlaw) in April of 2005.

In addition to all his accomplishments in life he was also a proud and active member and a former President of the Steuben County Town and Municipal Highway Association.

Dewert was proceeded by his mother, Gertrude and father, Alan. He is survived by his wife, Rhonda and sons Dylan Jr. and Dalton. In addition, he has a brother, Aubrey.

Dylan Dewert, gone at the age of fifty-seven.

Services are incomplete at this time.