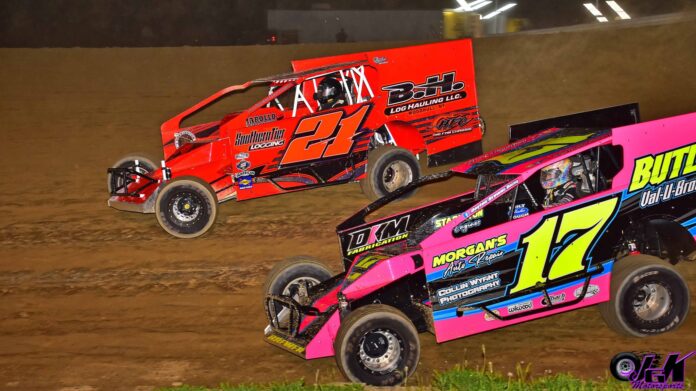 WOODHULL, NY – Superior Propane of Woodhull along with the Elkland, Pa. Moose were on board once again at the Woodhull Raceway to sponsor the Annual George Williams Memorial.  Named in honor of the founding father of the historic Steuben County facility, the George Williams Memorial is traditionally one of the more recognizable events on the tracks yearly schedule card and this year’s night of action did not disappoint.

Second generation driver from nearby, Jasper, NY, Dayton Brewer is still young in age, however he has paid his dues in racing beginning with go-karting at local venues prior to moving into the Sportsman Division at the track he calls home, the Woodhull Raceway.  Having grown up in a racing family and watching his father, Bill Brewer who himself had much success in both the Super Stock and Sportsman Classes at Woodhull, Dayton Brewer has been a quick study and under the watchful eye of his father/crew chief, Brewer has been very good in the open wheel Sportsman prior to moving into the tough Insinger Performance Modified Class several years ago.  Having picked up feature wins previously at Woodhull in a Modified, the decision was made a few seasons ago to switch chassis manufacturers to DKM and even though he has struggled at times, you could see a steady progression in the team’s program.  On this night, Mike Bills and Bob Silvernail would lead the twenty-one-car feature to the opening green flag for the thirty lap, $2,500 to win event as Bills would hold the point the first half of the event as the top three would show Bills, Brewer and VanPelt holding court at the front of the field.  After a slow beginning to the feature including three caution flags in the first three laps, from lap four on it was clean and green to the checkered flag with Brewer taking over the lead on lap nineteen when Bills pulled out with motor issues and from there he would never look back.  VanPelt, who had already won a pair of feature events in 2022 was looking to claim another George Williams Memorial, however, Brewer was too tough to manage on this night and went on to claim his first ever Williams trophy and the $2,500 check.  BVP would have to settle for second while Donnie Lawson would go on to take the third and final podium spot.  Brian Doolittle continues to impress with another solid run in his Larry Doolittle prepared machine with Joe Dgien having another solid night in taking home fifth.

Cayden Lawson has been at or near the front in each of the previously run NAPA Crate Sportsman features thus far in 2022, however a rash of bad luck and bad timing has found the third- generation pilot from Addison, NY running at or near the front only to fall prey to some snafu.  On this night there was no way Lawson would be denied as he led from start to finish in taking home his first feature win of the season.  Modified veteran wheelman, Josh Nobriga has found a home piloting the Will Wood owned Sportsman and thus far in “22” he has flexed plenty of muscle but on this night had nothing for the high-flying Lawson and settled for second at the finish as only three caution flags would slow the pace.  For the second consecutive week, Tim Guild claim third while last week’s top two in winner Art Goodier and Stacy Jackson would go on the round the top five on this night in NAPA 602 Crate Sportsman action.

Jason “The Jet” Knowles has been fast the past two weeks in the Armstrong RUSH Crate Late Model Division and his newfound speed was able to wrestle the lead away from Joe Layfield on lap six and go on to his second consecutive win of the season.  Brother Brian “Pork Chop” Knowles was once again solid as a rock in finishing in the runner-up slot as the 2021 class track champion continues to be a solid contender to back up last years championship winning season.  Joe Layfield, who led the opening five circuits would drift back to nail third and for the veteran wheelman it was his best finish in RUSH LM actin in recent memory.  A pair of Canisteo, NY drivers in Jason McGregor and Rookie of the Year contender, Brett Marlatt would round out the top five.

2021 Joe Willcox Performance Street Stock Track Champion, Brett Crawford picked up his second feature event of 2022 and in doing so not only backed up his opening night victory, but places him in contention to try and repeat.  However, Dan Gardner who had a win on April 30 and last weeks winner, Travis Webster will have something to say in the matter as for Gardner it was another solid night in taking home second place money in the Willcox Performance 20 lap feature with Luke Boom offering up an exceptionally good effort in claiming third.  Webster, who would start at the back of the field would climb up through the field and with only one yellow flag on lap three had to do things the hard way in coming home fourth while Mick “The Quick” Seeley had another solid and consistent run to finish fifth.

The Hobby Stock Division is one of the more competitive classes that races weekly at Woodhull, but on this night yellow fever would be the name of the game as caution after caution would slow the pace and keep the field bunched.  However, the racing under green was fierce as ever and when the checkered rag waved to end the twenty lap go it was Mike Spencer claiming his second trip to victory lane in 2022 and if you consider his two wins and a close second, Spencer has been the most consistent of the bunch in four outings thus far.  Joe Birsdall keeps knocking on the door but came up a bit short in finishing second as he was chased across the line by opening event pole position starter Brian Austin who finished third.  Paul Dgien and Brandon Conklin would come next in line in the top five finishing order.

Teddy Morseman was able to back up his opening night Wicked Tee’s Mini Stock feature in dominating form for his second trip to victory lane thus far in 2022.  Try as they night, Jason Warner and Rick Amidon could not keep pace with the event winner and had to settle for second and third consecutively.  A pair of up-and-coming races in Dillon Morseman and Jordan Costley would take home top five finishing spots.

Ryan Austin continues his domination of the Front Wheel Drive Division as for the four time in as many events he waxed the field and remains perfect on the year.  Finishing second was Wesley Houghtaling who had another solid runner-up finish with Kevin Doud, Kayley Bacon and Nick Brown rounding the top five.

Like Ryan Austin before him, Bradly Morseman also remains perfect on the year in nailing feature number four.  Morseman, who shares his potent 44 machine with dad, Teddy easily won the fifteen lap, yellow flag filled main event as for the fourth straight week, Marshall O’Brian would have to settle for second place with Brayden Feenaughty, Kayleigh Morseman and Desaray Miles filling in the top five slots.

Up next at Woodhull on Saturday, May 28, 2022 Rent a Tent of Mansfield, Pa will present a Regular Great 8 Show including a special $1,000 to win thirty lap Joe Willcox Performance Street Stock Special.

Gates for both pit and grandstand entry open at 4:30 pm.

For updates throughout the week leading up to the May 28 event including weather information and the nightly race agenda go to www.Facebook.com/WoodhullRaceway/.

Points, the 2022 schedule of events, rules, track history and much more can be found at www.woodhullraceway.com.

Car counts are based on the opening night sign in, not on how many run in their features. 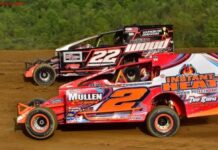