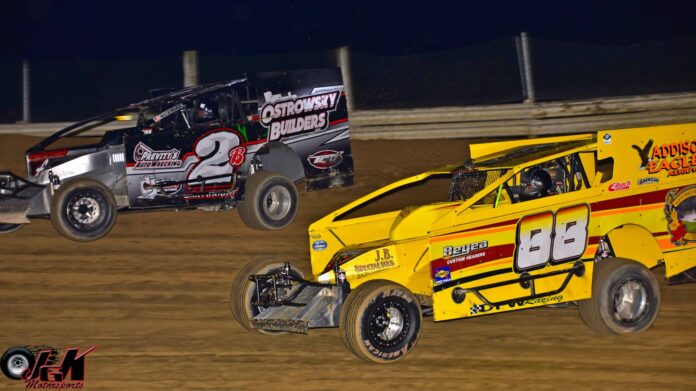 WOODHULL, NY – Under clear skies, cold and blustery conditions the Woodhull Raceway was able to put week eight safely into the record books with a winners list that included several repeat customers and a trio of first timers in the 2022 season.

It was the 1st Annual Race of Remembrance Night at the historic Steuben County speed plant as fans were greeted by a wall of large graphic photos of former drivers, track employees, sponsors, and fans and although now deceased, it is these same men and women that made the Woodhull Raceway what it has become over the past fifty-seven years.

For Dundee, NY native, Brady Fultz his “22” season has been a struggle with several mechanical gremlins getting in the way of his DFW Motorsports (Dominick, Fultz, Wright) prepared, Reubenbrook Farms sponsored 88 machine, however Fultz was able to take full advantage of his pole position starting spot in the Insinger Performance Modified A- Main and lead all twenty-five laps enroute to his first feature win of the season.  With no less than a half dozen caution flags slowing the pace including a huge bone jarring crash in turn two on lap three that took out the likes of Billy VanPelt, Eric Grice, Ryan Tracy and others, Fultz was able to remain in control on every re-start with Dayton Brewer keeping the race leader within striking distance running a close second.  With the race winding down, June 4 winner, Jake Dgien had made his way into the runner-up slot after starting the event in tenth, one position behind Brewer and with a half straight away between his machine and that of Fultz he began to whittle away at the advantage.  As the lead duo flashed by the five to go signal, Dgien was closing on Fultz and with parallel sticks up he was on his rear bumper.  Dgien made a couple of low side moves exiting both corners and was able to get along side of Fultz on the closing lap.  As the pair exited turn four and the double checkered flags waving it was a drag race to the finish line with Fultz holding off Dgien by less than a half a car length to claim his first win of the season and with the victory became the sixth different Modified driver to win a feature event at Woodhull in 2022.  Dayton Brewer rounded out the top three podium spots with Donnie Lawson, who came from the rear of the field and outside front row starter, Cole Youse running with the lead pack the entire distance to round the top five.

Like the Modified Division, yellow fever was the name of the game in the NAPA Crate Sportsman twenty-five lap feature event with no less than a half dozen caution flags keeping the field bunched.  Art Goodier was able to wrestle the top spot away from front row starter, David Mayo early in the event and then withstand relentless pressure from Mayo throughout the entire distance to claim his second win of the 2022 campaign.  Mayo tried every trick in the book including a few love taps to the rear bumper of the Goodier machine, but was unable to rattle the veteran Osceola, Pa veteran.  Even with all the caution flags the racing at the front kept the interest of the hearty fans who braved the frigid conditions and as the checkered flags waved Goodier was able to hold off Mayo for the win with current high point man, Josh Nobriga piloting the Will Wood owned Crate taking third place money.  Ridge Runner, AJ Costley began the event in fifth and advanced one spot to claim fourth while fourth place starting Tim Guild would race in the lead pack throughout to claim fifth at the finish.

Like Brady Fultz before him, Jason McGregor has also found the going very tough during the first half of the 2022 season in the Armstrong RUSH Crate Late Model Division with one problem after another keeping his potent team out of victory lane.  However, on this night, McGregor was able to put on a near perfect drive in claiming the win, but it was no gimme by any means as he had to keep the current high point man and defending class track champion, Brian Knowles at bay throughout the entire twenty lap distance.  With just one caution flag slowing the event on lap seventeen, McGregor had to fight off relentless pressure from Pork Chop Knowles to claim the win in his father Charley McGregor’s owned machine and for the McGregor family the “22” season will be their last as after owning and fielding full fender cars for decades, Charley McGregor will call it quits at the end of the year and with his retirement it pull the curtain on a legacy as a winning car owner.  Knowles did have to settle for second with Rookie of the Year contender, Jacob Tubbs finishing a solid third and for Tubbs he kept the lead duo within striking distance the entire distance after beginning the event from the pole position.  Veteran competitor, Joe Layfield was fourth at the finish while first year competitor, Rickie Loucks would complete the top five.

Brandon Conklin would lead all twenty laps in taking his first win of the year in the highly competitive Hobby Stock Division and with his victory becomes the fourth different driver to find victory lane in the first eight weeks of competition.  Conklin was in control the entire distance with a half a straight away advantage over the field, however with just five laps remaining, Paul Dgien would begin his charge as the Conklin lead was dwindling rapidly.  With parallel sticks in the air Dgien had cut it to a car length, but Conklin was able to hold on for the win with Dgien coming up a car length shy.  May 14 event winner and former Crate Sportsman competitor, Kayden Dgien put in another solid performance in claiming third at the double checkers with two time “22” feature winner, Big Mike Spencer finishing fourth with Greg Young, who began the event in the front row along with Conklin completing the top five finishing order.

Brett Crawford made it win four on the campaign in the Joe Willcox Performance Street Stock Division and with the win he will stretch his current point lead heading into the second half of the season.  However, Kurt Stebbins was the show in his first Woodhull Raceway start of the 2022 season as the veteran Wellsville, NY speedster and current Genesee Speedway promoter would blast thru the field on the extreme outside and make things look easy in taking the top spot.  With Stebbins on cruise control and stretching his advantage the battle was on for second place between the likes of Crawford, Mick Seeley and Travis Webster.  Then just past the halfway mark disaster stuck for Stebbins as a pair of lap machines racing side by side began to slow his pace and then exiting turn two contact between the lap cars swept up Stebbins ending his near perfect run and the sure win.  On the restart, Crawford would assume the race lead and hold off Mick “The Quick” Seeley to claim victory.  Stebbins was able to rally back and pass two- time season feature winner, Travis Webster on the last lap to claim third as Luke Boom continues his impressive year in claiming fifth.  For a jubilant Crawford, his entire team and massive following in victory lane this has been a career season in a class that provides tough competition from top to bottom with four different drivers picking up wins thus far.

After two consecutive weeks of being shut out of victory lane, Bradly Morseman was able to make a mid-race pass of two -time 2022 class feature winner, Marshall O’Brian to claim the Wicked Tee’s Warrior fifteen lap feature go.  For Morseman it was win number six on the season with O’Brian claiming the other pair of features that have been staged thus far as the duo continues to dominate the division.  However, the two young Addison, NY speedsters need not look hard over their shoulders as a slew of first- and second-year young men and women continue to show steady improvement in a class that has produced numerous drivers that have gone on to greatness.  With Morseman in control of the event O’Brian could only settle for second at the finish with Izzabella Morseman claiming third.  Fourth place went to Courtney Thomas with Kayleigh Morseman rounding the top five.  Jaden Stone and Desaray Miles could complete the finishing order.

Ted Morseman, who shares his potent 4- cylinder rear wheel driven Mini Stock with son Bradly blistered the field in taking his third Wicked Tee’s Mini Stock feature of the season.  With Morseman’s victory it made him the third different winner in the past three weeks in a class that seen five different faces grace victory lane thus far.  As he did in his previous wins, Morseman made it look easy as he won by a sizable margin over second place finisher and two- time 2022 feature winner, Jason Warner.  Danielle Thomas, daughter of race winner Ted Morseman would put in a sold run to claim third with Brian Grant and Jason Smart claiming fourth and fifth.

Ryan Austin continues his rampage in the Front Wheel Drive Division in claiming his seventh feature win in eight starts.  Austin would take control on lap one and never look back and with the win will increase his point advantage heading into the second half of the season.  Kevin Doud would place second in the fifteen- lap feature event as he was followed across the line by Kayley Bacon who would recover from an early race incident to claim third.  Dokata Decker, Kevin Williams and Larry Keeney would complete the field.

Coming up on June 25 it will be the Annual Jim Williams Memorial Fireworks Extravaganza including a Great 8 Show featuring all of Woodhull’s regular classes seeing race action.

Spectators planning on attending should go to www.Facebook.com/WoodhullRaceway/ for updates throughout the week regarding pre-event ticket sales and one-day reserved seating. The track ticket office will be open select hours on Friday, June 24 as well as the day of the event so those wishing to avoid long lines on race night are encouraged to plan their time accordingly.

For a look at the current points, class rules, marketing partners, directions to the facility and more click on at www.woodhullraceway.com.

Car counts are based on opening night sign in, not on how many cars run in features.