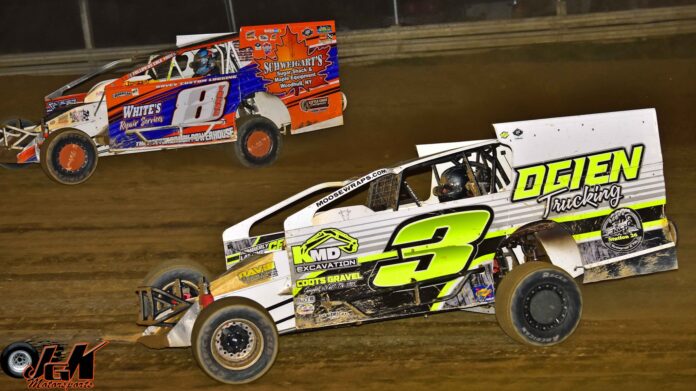 WOODHULL, NY – For the second time in three weeks, the Patriot Sprint Tour made an appearance at the Woodhull Raceway and after a spirited battle between a pair of pervious Woodhull Raceway PST winners, The Cobra, Chuck Hebing was able to wrestle the top spot away for then race leader, No Panic, Davie Franek and go onto the win.  Denny Peebles completed the top three podium finishing spots with Dalton Rombough and Jonathan Preston rounding the top five.

For a complete and concise wrap up of the entire Patriot Sprint Tour event at the Woodhull Raceway go to www.patriotsprinttour.com.

Jake Dgien has been on a rampage over the past three months with wins and top five finishes in the high profile Insinger Performance Modified Division. He would begin the twenty-five- lap feature inside row four as Cole Youse and Brayden Bills would lead the field to the opening green.  Youse would take command immediately and open a four-car length advantage over fellow big block Chevrolet competitor, Russ Morseman who started in the fifth slot.  One quick caution on the opening lap would slow the pace, however a long green flag run from lap two thru sixteen would find plenty of race action as Youse and Morseman would continue to set a torrid pace with Donnie Lawson and Jake Dgien in tow.  On the lap seventeen restart is where Jake Dgien would make his move sweeping past the top three drivers and take over the lead on lap eighteen.  From there Dgien would have to withstand one final yellow on lap twenty-three and go on to this fourth feature win of the season.  Morseman’s magnificent second half of the season performance would continue with another runner-up finish as Cole Youse would complete the top three after having led the first seventeen laps.  Fourth place would go to outside pole position starter, Branden Bills who ran with the lead group throughout the distance with Cory Costa advancing three positions from his eighth place starting spot to round the top five finishers.

Class Rookie, Levi Riley along with seasoned veteran Tim Guild would lead the NAPA 602 Crate Sportsman to the green flag for their twenty-five lap A main. Riley was able to get the jump and control the pace throughout the entire distance and go on to his second win of the year after taking his first ever Sportsman feature on July 9.  Riley had plenty of breathing room between his machine and that of Guild, but Kenny Peoples Jr. was putting on the show from his seventh starting spot.  With only a couple cautions to slow the pace and with Riley in clean air, it took numerous laps for Peoples to clear the Guild machine and start his charge to the front.  With the laps clicking off, Peoples had Riley squarely in the cross hairs and with the five to go signal was on Riley’s rear bumper.  Peoples tried desperately in making the right moves and with less than a half lap remaining made an inside pass on Riley coming for the double checkered flags.  However, the effort by Peoples would find his machine coming up two feet short as he had to settle for second to his fellow Addison, NY rival, Levi Riley who posted his second win of the season.  Finishing third was Guild who raced within the lead pack the entire distance with Stacy Jackson and Isabel Barron having solid runs in finishing fourth and fifth.

Joe Willcox Performance Street Stock veteran drivers, Mick “The Quick” Seeley along with “Stock Car Willie”, Mike Williams would bring the field to the opening green flag.  Branden Morseman would waste little time moving into the top spot from his inside row two starting position and he brought current high point man, Brett Crawford along for the ride after beginning the twenty-lap grind inside row four.  With only a couple quick yellow flags early on slowing the pace, Morseman was able to control things, however, Crawford was all over him like a cheap shirt, but at the finish it was Branden Morseman claiming win four on the season and second in a row.  Try as he might, Crawford had to settle for second as the lead pair were chased across the line by Luke Boom who would claim third with Dan Gardner in tow.  It was literally a blanket finish for the top four finishers as Mick Seeley would round out the top five.

Wes Houghtaling has taken over the reins in the Front Wheel Drive Class after his second feature win on June 11 and from there has run the table in claiming his eighth in a row and ninth overall.  Houghtaling had a spirited battle with Kayley Bacon early in the twelve- lap feature go, but once out in clean air, Houghtaling was in another zip code.  Bacon continues to have a great second half of the season as she posted another good finish in taking home second place money with Nate Freeland and Kevin Doud completing the field.

In the Wicked Tee’s Warrior Division, once again the top two in the class went at it for the win and when the twelve-lap feature was over, Bradly Morseman had bettered his number one nemesis in Marshall O’Brian and for the fourteenth time in “22” would claim the Warrior feature win.  Kayleigh Morseman would go on to finish third with Jaden Stone and Izzabella Morseman rounded the top five.   Brayden Feenaughty, Courtney Thomas and Desaray Miles completed a field of youngsters that continue to impress as they all move forward with their racing careers.

Bradly Morseman warmed up his potent Mini Stock in the Warrior feature for dad, Ted to run in the Wicked Tee’s Mini Stock feature and dad picked up where son left off and would go onto take home his fifth win of the season.  However, the Ted Morseman victory was not a walk in the park by any means as he had to contend with John Hand Jr. who would lead early in the twenty-lap feature after assuming control from his inside row two starting slot.  The pair ran side by side for several laps before Morseman was finally able to make the pass and go on for the win.  A late race yellow allowed Hand one last shot at the high-flying Morseman, but the effort came up shy as Hand had to settle for the runner-up spot with Danielle Thomas, Jason Warner and Dillon Morseman completing the top five.

Dillon Philip has been rock solid all season long in the Hobby Stock Division, however he has not been able to put all the pieces together to claim a win.  However, all that would change on this night as Philip would take control early on after leading the sixteen-car field to the opening green flag and go on to his first win of the season.  Opening night feature winner and defending class champion, Jeredd Dennis continues his second half of the season rally and came home in second place with other class heavy weights in Paul Dgien, current point front man, Joe Birdsall and Scott Brown completing the top five finishers.

Up next at Woodhull it will be Wicked Tee’s and Larry’s Latrines sponsoring a regular Great 8 Show including the return of the Armstrong RUSH Late Models after a one-week layoff.  It will also be Back-to-School Backpack Night on Saturday, August 20, 2022.

For a complete look at the current point standings, the reminder of the 2022 schedule of events, class rules and sponsor information log on at www.woodhullraceway.com.

For posts leading up to the August 20 event including the nightly agenda and any potential weather matters go to www.Facebook.com/WoodhullRaceway/.