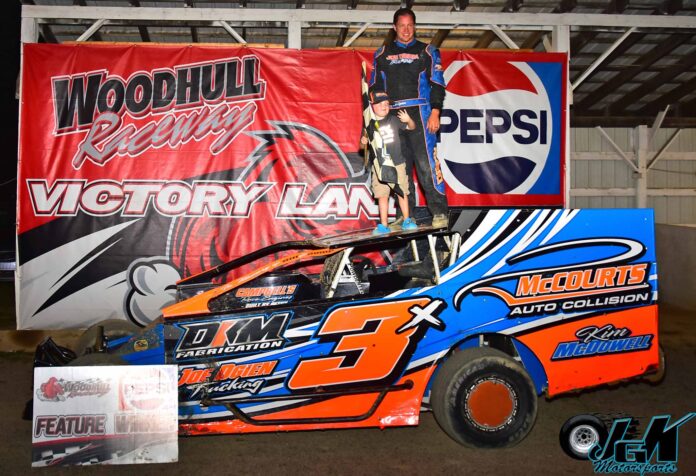 Joe Dgien and his cousin, Jake Dgien have ruled the roost in the Insinger Performance Modified Division throughout most of the 2022 season at the historic Steuben County oval.  Entering the night Joe had a small point advantage over Jake with several others like Donnie Lawson, Dayton Brewer and Russ Morseman still with a chance of claiming the title with just a few point shows remaining.

Gregg Turner and Brayden Bills would lead the fifteen car field to the opening green for their twenty-five feature, but it was Joe Dgien leap frogging over the top six starters to take control of the event and go on for his second feature win of the year and stretch his point advantage.  Brady Fultz has struggled as of late, but he was able to find the right balance in his DFW machine to claim second place after lining up sixth on the original starting grid.  Last week’s feature winner, Jake Dgien began the event inside row seven and fought his way thru traffic to claim the third and final podium position.  Brayden Bills would race within the top five the entire distance to claim fourth as Russ Morseman continues his outstanding second half of the 2022 season by taking home fifth place money.

Brian Pork Chop Knowles has not visited victory lane at Woodhull in the Armstrong RUSH Late Model Division since July 16, however that would all change on this night as the Painted Post native would take full advantage of his outside front row starting spot in taking control of the twenty lap feature right off the drop of the opening green and never look back in taking his sixth feature win of the year.  Steve LeBarron, who came into the night with one win to his credit way back on opening night would finish second after starting outside row two while four time “22” winner, Jason Knowles would ride home third after beginning the event inside the last starting row in thirteenth.  Rookie contender and June 25 winner, Brett Marlatt would claim fourth at the double checkers with Austin Allen competing the top five and for Austin it was another consistent drive after picking up his first feature win of the year on July 30.

Tim Guild and young lady competitor, Isabel Barron would bring the NAPA Crate Sportsman field to the opening green with veteran driver, Guild jumping into the early lead and from there cruise on to his first feature win of the year.  Two time 2022 class feature winner and Rookie of the Year contender, Levi Riley would follow Guild to the front after lining up in the second row and go on to claim the runner-up spot with two time winner, Cayden Lawson bettering his brother, Blake as the pair drove from the third starting row to claim third and fourth at the finish with lady driver, Nichole Hoag advancing three spots to round out the top five.

2021 Hobby Stock Track Champion, Jeredd Dennis has been nothing but a picture of consistency all season long but has not had a win since the season opener on April 23.  That would all change on this night as he would line up in the fifth starting slot and then go on to take the victory.  Tracy Dunn and Jason Ketrow would lead the twelve car field to the opening green flag with Dunn taking immediate control.  Dennis lined up mid pack inside row three and wasted little time in moving thru traffic to take command of the lead and go on to the win after being shut out for some fifteen weeks including a loss last week by a nose. Paul Dgien began the event outside row two and would chase Dennis to the double checkers while Scott Brown would come home third.  Brian Austin would begin the event in eighth and advance to fourth while Ketrow would race within the lead group throughout and round the top five.

The tough Joe Willcox Performance Street Stock Division has produced five different feature winners thus far in the 2022 season with such weekly loyalists like Mick Seeley and Mike Williams trying to break through. At the start of the twenty-lap feature Jesse Tuthill and Seeley would lead the charge, but it was Dan Gardner who would assert himself into the lead early on from his outside row two starting spot.  Gardner, who competes weekly and has immaculate equipment was not going to be denied as he held on thru a few yellow flag slow- downs to take his second win after his first victory on week two.  Current high point man and five time 2022 feature winner, Brett Crawford was within a car length of Gardner the entire distance but came up short and settled for the runner up spot as the lead duo were chased across the line by Ted Morseman and Luke Boom who each have one single feature win thus far.  Willy Easling piloting the 3J on this night rounded the top five.

Lady competitor, Danielle Thomas would lead early in the Mini Stock feature, however current point leader Jason Warner was too much to manage on the night as he swept by and would go on to feature win four on the 2022 campaign.  Thomas did however put on a terrific drive to claim second while John Hand Jr. would complete the top three podium spots.  With the 2022 Wicked Tee’s point championship in his hip pocket by virtue of fourteen wins, Bradly Morseman has jumped into the Mini Stock Class to complete the year and immediately flexed his muscle by starting last and driving up to fourth while Jordan Costley would complete the top five finishers.

Marshall O’Brian outdistanced a solid field of seven competitors in the twelve lap Wicked Tee’s Warrior feature event including fourteen time 2022 class winner, Bradly Morseman.  Desaray Miles and Courtney Thomas would lead the field to the opening green, but it was O’Brian storming thru traffic to assume the top spot from his third row starting position.  From there, O’Brian would cruise to win three on the campaign and in victory lane stated that at the completion of this season he will be moving into the Armstrong RUSH Crate Late Model Division for competition in 2023.  The team is already in possession of the former Wayne Robertson machine and will spend the offseason putting a new Crate Late Model engine program together with plans to compete at Woodhull next season.  Following O’Brian across the line as the checkered flag dropped was Bradly Morseman in second and with that ended his winning streak at nine straight.  Kayleigh Morseman would come home third followed by Jaden Stone with Izzabella Morseman rounding the top five.  Courtney Thomas and Desaray Miles would complete the field.

The Front Wheel Drives would wrap up the Great 8 Show and finally Rookie of the Year contender, Kevin Doud was able to find victory after showing steady improvement each week.  Even with class heavy weights in Wes Houghtaling and Ryan Austin out of contention, it still was still no walk in the part as he had to hold off Preston Cobb and Carl Odell who would give chase and finished second and third.  Kayley Bacon continues her impressive season coming home fourth while former Warrior competitor, Ridge Cobb would finish fifth.

Up next at Woodhull on August 27, 2022, High Up Trucking will welcome the Vintage Cars to the track for their lone appearance of the year in conjunction with a Regular Great 8 Show featuring all the weekly divisions.

With the 2022 point battles winding down and with just a pair of point paying shows remaining a complete rundown of the current point standings can be found along with other valuable information at www.woodhullraceway.com.

Posts throughout the week leading to the August 27 show including the nightly agenda and any weather concerns will be available at www.Facebook.com/WoodhullRaceway/.

After the season point finale on September 3, racing will continue for two more weeks including s big 30 lap $2,500 to win Modified Special and the Big Bop Dirty Hobby Stock Event.  Full Fender Night on September 17 including the $2000 to win Joe Willcox Performance Woodhull 100 will pull the curtain on the year of activity.