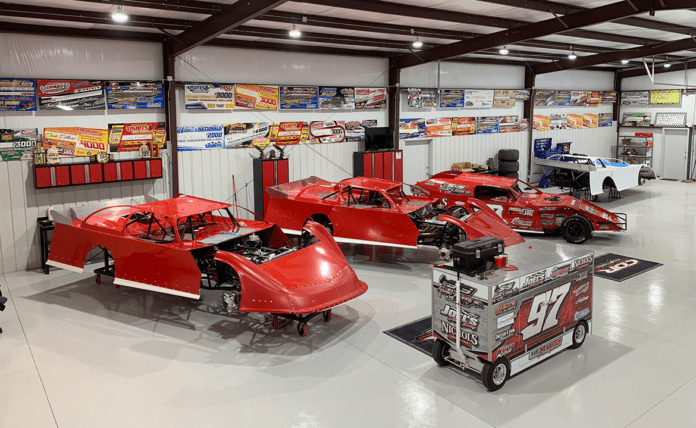 CONCORD, NC — While most of the motorsports world has been idle the past few weeks, World of Outlaws Morton Buildings Late Model Series racer Cade Dillard hasn’t been taking it easy.

Dillard, of Robeline, LA, opened up a brand-new race shop in December 2019 to house both his own cars and those of his new customers. Cade Dillard Racing now operates as a full-time speed shop for service, parts and sales of Late Model and Modified competitors alike.

During this time away from the track racing his own cars, Dillard has been hard at work with his crew members on new customer cars, preparing them for the return of the 2020 racing season. And they have been very busy.

“Once I got the new shop built, there’s been times in the past couple months where we’ve had nine or 10 cars in there at one time,” Dillard said. “It’s opened up a lot of opportunity for me.”

Dillard and his crew of Donnie Pederson and Ryder Cantillo are the main assets around the shop, helping with assembly of new cars, maintenance, setup and scaling. Dillard has long been a customer of MB Customs Race Cars, owned by brothers Jimmy and Chris Mars of Menomonie, WI. He acquires the bare frames directly from MB Customs, then assembles the rest of the car from ordered parts and sets them up according to his custom package.

According to Dillard, there’s several reasons as to why he’s stuck with the Mars brothers’ creations throughout his career. In fact, Jimmy has been one of the biggest inspirations to him as a driver.

“To my career, in general, he’s been a huge influence on me,” Dillard said. “He’s been extremely helpful, and I definitely wouldn’t be where I am right now with all of this if it wasn’t for him. He’s been very supportive of what I’m doing with CDR.”

As a former Modified star himself, Dillard said he sees a few more Modified customers in his shop compared to Late Models. He’s been so used to working on Modifieds with all the time he spent behind the wheel of them before his Late Model ventures began just three seasons ago, which comes in handy when assembling the new ones.

“Just having a lot of experience and success with them at a lot of places across the country, I kinda know what works, and there’s just so many MB Mods out there. They sell so many of those, so that helps a lot as well.”

When they roll out of the shop and into the customer’s hauler, each car receives a small decal that reads “MB Customs by CDR.” At heart, it’s the car just as the Mars brothers created, but with Dillard’s little intricacies that represent the things that he sees will work best for his customers.

“We’ve already got a few small things, as far as the frame goes, that I do different to my Mods,” Dillard said. “As far as getting to build the frames, I feel like [MB] has such a good product there, I don’t want to mess with a good thing.”

This has been an operation Dillard has envisioned himself doing for many years, but it just never fit into his schedule or budget until recently.

“It’s definitely always been something I’ve wanted to do. Before, with the shop I had, it just wasn’t possible to do that. I just didn’t have the room,” Dillard said.

All of the work has certainly kept Dillard and the shop crew busy, especially in times like these. In years past, Dillard said he did not have as much time (or space) to take on side projects of this size. But now with the big shop, it’s easier than ever to work the day job he loves.

“It keeps me spread out. I’ll go work for a couple of hours on some cars, after that spend a couple hours at the desk getting some paperwork done. I definitely enjoy it,” Dillard said.

In the days immediately following the DIRTcar Nationals at Volusia Speedway Park, Cade and his wife Shelby became proud parents to a second little addition to their family. Cade’s become quite the family man with two small children and said spending time at home has become a staple in his daily life outside of the race shop.

Even with the impact social distancing and public gathering restrictions has recently had on all business levels, Dillard said CDR’s business has actually picked up quite a bit now that his customers have found the time to bring their cars to the shop for service. He’s been taking full advantage of the business boom and feels fortunate to keep all of his employees paid in such struggling times.

“It’s kinda been a lifesaver with all that’s going on right now, not being able to race or having any income coming in off of my winnings,” Dillard said. “It’s been a blessing to have this, to have some income and pay the pay the bills around there and keep my guys busy.”