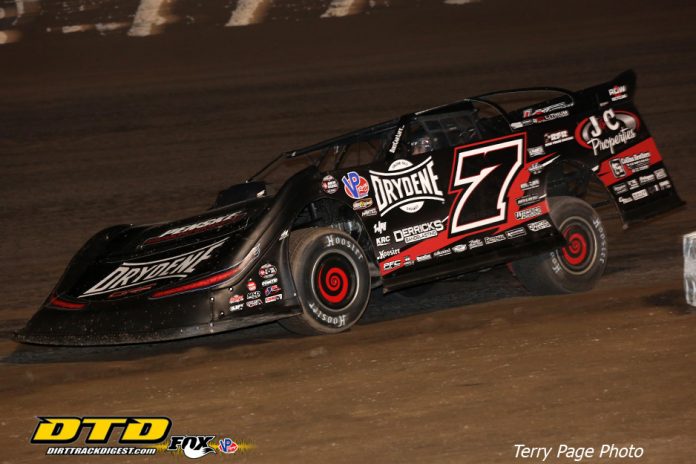 DAVENPORT, IA — Arguably the most intriguing facet early in this 2020 World of Outlaws Morton Buildings Late Model Series season, this weekend’s “Inside Out” doubleheader at Davenport Speedway is something some fans and drivers have never seen before.

On Friday, May 29, the weekend will open with a full program of racing on Davenport’s smaller infield 1/4-mile oval with the IMCA Late Models supporting the “The Most Powerful Late Models on the Planet.” On Saturday, May 30, the script is changed, switching to Davenport’s larger, outer 1/2-mile speed factory and an all-World of Outlaws Morton Buildings Late Model Series showcase.

With local restrictions preventing fans from attending the Inside Out weekend to help curb the COVID-19 pandemic, the races will be participant-only events broadcasted live on DIRTVision.

So, what do the drivers themselves think about this unique Inside Out doubleheader, and which track do they prefer?

Ricky Weiss, who currently sits second in the World of Outlaws Morton Buildings Late Model Series standings after a 1st and 2nd last weekend at Jackson Motorplex, is a huge advocate for the half-mile. The Headingley, Manitoba native has never raced on the 1/4-mile, but does own a sixth-place finish in last year’s World of Outlaws event on the Davenport 1/2-mile.


“I would choose the big half-mile every time, no doubt,” Weiss offered. “I just seem to run better on the big tracks and we usually damage our cars less too. This is the first time I’ve ever been to a speedway with a big track and small track, so it’ll be interesting to see how it all pans out. We were okay on the big track last year, but obviously coming into this year we’ve got some higher expectations.”

In last year’s July showing at the Davenport 1/2-mile, Cade Dillard of Robeline, LA, turned in a stellar third-place bid behind Jimmy Owens and Brandon Sheppard. However, when it comes down to a decision, the boy from the Bayou is 100% choosing a battle on the bullring.

“I grew up on all of these little bullrings around Louisiana, so I would definitely rather be on the small 1/4-mile all weekend,” noted Dillard. “It just fits my kind of driving style so much more than the 1/2-mile.”

“I would take the 1/4-mile all day, because it won’t hurt near as bad if you wreck,” Simpson joked. “I like the idea of running both tracks though. They’re both unique in their own ways, so I think both nights should be a good show.”

For other drivers, it doesn’t matter at all. Chase Junghans of Manhattan, KS, is just excited to go racing again. Deep down though, the driver of the No. 18 has to be excited for Saturday’s 1/2-mile event with previous finishes of fifth in 2019 and eighth in 2018 on Davenport’s bigger track.

“I’m game for either one of them,” Junghans said. “It will be two totally different animals for sure. I think the fans and viewers at home will really get to see the difference from Friday to Saturday. For me, they both pay at the end of the day. I’m just glad we got somewhere to race!”

Leading Rookie of the Year candidate, Ashton Winger of Hampton, GA, is most looking forward to Friday night on the 1/4-mile. With little experience on big tracks, he’s focused on capitalizing on his familiarity Friday and then aiming to improve and gain experience on Saturday’s 1/2-mile event.

“I would probably rather run on the 1/4-mile both days,” Winger suggested. “I don’t have a ton of experience on the big tracks yet, but I know the only way to get better is to keep on going, so hopefully both days produce good racing and good results for us. I don’t know of too many places that have two tracks on the property, so that’ll be interesting.”

Winger’s closet competition in the Rookie of the Year bout (-52 points), Matt Cosner of Ridgeley, WV, sees it the other end. Growing up around West Virginia, his 1/2-mile prowess shines through and through, but the driver of the No. 66C Rocket is still looking forward to Friday’s bullring.

“I would choose the 1/2-mile for sure,” Cosner stated. “I like bigger tracks because that’s mostly what we run out our way at home. Everything around us is a 1/2-mile to 5/8th-mile, so I’ve grown comfortable around those sizes of tracks. I’ve never heard of such a thing, so I’m anxious to see what two tracks in one looks like. I was joking around and said we should have a joker lap on Saturday like Rallycross to make it interesting.”

Be it 1/2-mile, 1/4-mile, or no preference at all, the World of Outlaws Morton Buildings Late Model Series drivers will get a little taste of everything this weekend at Davenport Speedway. Remember, fans at home can watch both nights LIVE on DIRTVision.

Teams and drivers may enter the event at THIS REGISTRATION LINK until entry closes tonight, Thursday at 8:00pm ET. This weekend’s tire rule is Hoosier LM-30, W-30 on all four corners with a Hoosier LM-40 right rear option. Additional information can be found in the Competitor Notes and Participant Guidelines.