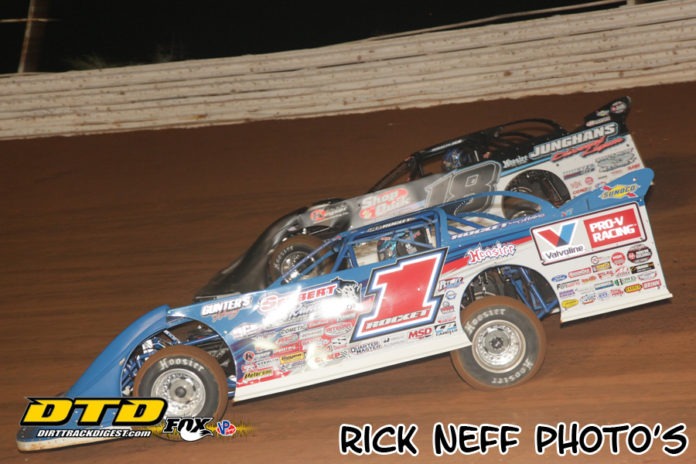 His latest conquest at Volunteer Speedway on Friday night wasn’t an easy one. Becoming the fourth different leader on lap 34, “The Rocket Shepp” took advantage of a wild restart and roared to the top spot, a position he would not relinquish in the closing stages of the 50-lap feature.

“It feels good to get another win, especially here at a place that I typically don’t run too well at,” said Sheppard after his first career win at Volunteer Speedway. “This track was hammer down and up on the wheel tonight, just the way I like it. We should’ve won the heat race there after we qualified so good, but I just didn’t get a good start. It made us have to work a lot harder than we wanted, but my guys didn’t give up on me.”

The night started strong for Sheppard and the Rocket1 Racing, Valvoline, Rocket/Durham No.1 when they set QuickTime over the 33-car field at 12.151 seconds, which came past 10:00pm due to a three-hour delay caused by rain. Four Team Drydene heat races set the stage for the Morton Buildings feature redraw, where Scott Bloomquist of nearby Mooresburg, Tenn. drew the pole position for the 50-lap feature at his home track.

However, it was neither Bloomquist or outside polesitter Kyle Stricker in control of lap one, as Brandon Overton of Evans, Ga. split the front row and assumed the lead with a daring 3rd-to-1st move to kickstart the race. Overton, who has been on top of Dirt Late Model Racing in recent weeks, led the opening five laps before The High Side Tickler, Strickler, found the aforementioned high side and drove right by Overton’s Wells Motorsports No. 76 Longhorn Chassis.

The field continued to shuffle positions behind Strickler throughout the opening stages, until the caution flew on lap 27, which set up a restart that would change the entire race. Before the green dropped, it was Strickler commanding Dennis Erb Jr., Bloomquist, Sheppard & Overton. From there, madness ensued.

First, second-running Bloomquist went high into turn one and slipped to seventh, then Strickler pushed into turn three and bounced off the turn four wall, relinquishing his lead and falling to sixth. Capitalizing on the chaos was Overton, who went from fifth-to-first in one lap as he shot out of a cannon and drove by Erb to reclaim the top spot. His freedom at the front, however, soon came crashing down. After leading laps 28-29, Overton pulled into the infield with mechanical issues and handed P1 to Erb’s Rocket No. 28.

Erb of Carpentersville, Ill. paced the next four laps until Sheppard, the two-time and defending World of Outlaws champion, brought his No. 1 into contention for the lead. On lap 34, B-Shepp rocketed off the banking off turn two and stormed by Erb down the backstretch to assume the top spot, a position he would not relinquish for the remainder of the race.

“We definitely had to some slicing and dicing in that one,” noted Sheppard on the hectic battle at the front. “I don’t know what happened to Overton, but man, I hated to see that. I would’ve liked to race him for the lead. That was a good battle with Dennis though, he did a great job tonight. The guys at Volunteer Speedway did a great job with this race track today. It widened out a lot more in that feature and made it a lot of fun.”

Sheppard survived two additional restarts on lap 45 and lap 46 before he officially secured his 59th career World of Outlaws Morton Buildings Late Model Series feature victory. The win marked his third-straight win – after a May 29-30 Davenport Speedway sweep – with the World of Outlaws, giving him his fifth-career hat trick with the series. It’s also his fourth WoO win of 2020 and extended his mark to 13 top five finishes and 14 top ten results in 14 appearances this season while pushing his points lead to +94 points on Ricky Weiss of Headingley, Manitoba.

For Dennis Erb Jr., the multi-time DIRTcar Summer Nationals champion made his return to the podium for the first time since March 6, 2020 at Duck River Raceway Park. His solid night peaked in control of the lead from laps 30-33 before Sheppard struck, but nonetheless, an impressive finish for Erb to build some momentum off of at Volunteer Speedway.

“The car was pretty good there at the beginning, but I faded towards the end,” said Erb on his car’s performance. “Once the bottom started to go away I had to move up and we just couldn’t get quite the same out of it.”

Earning his first podium appearance since his $15,000 score in the “Battle at the Border” finale at Vado Speedway Park in January, Cade Dillard of Robeline, La. capped Friday’s show with a third-place effort for his MB Customs No. 97.

“Boy, that track was treacherous,” Dillard commented on the conditions. “I was wore out about halfway, I honestly didn’t know if I could go any longer. I looked at the board and it was barely halfway; I was like ‘wow this is gonna be rough.’ Fortunately, we held on and picked up a great run.”

Rookie of the Year leader Ashton Winger of Hampton, Ga. earned a career-best run with his 16th-to-4th bid followed by hometown hero Scott Bloomquist in the fifth finishing spot after starting on the pole. Closing out the top ten on Friday at Volunteer was Chase Junghans, Cory Hedgecock, Chris Madden, Dale McDowell and Ricky Weiss.

The World of Outlaws Morton Buildings Late Model Series will be back at Volunteer Speedway in Bulls Gap, Tenn. tonight, Saturday, June 20 to conclude the weekend at the 4/10th-mile track. Fans can buy tickets HERE or watch online at DIRTVision. The gates are set to open at 2:00pm with hot laps scheduled for 7:00pm.