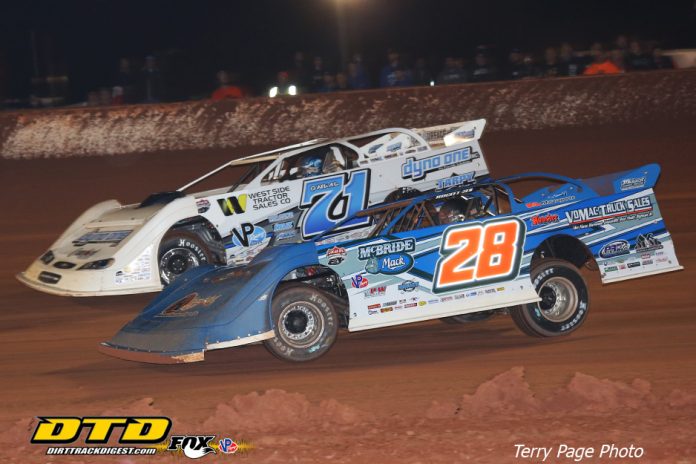 CONCORD, NC – What do you do on the heels of a career year? Set your sights higher obviously.

After recording his highest career points finish (fourth) on any national touring dirt late model series in 2020, The One Man Band will continue beating strong in 2021 with a full-time return to the World of Outlaws Morton Buildings Late Model Series on tap.

“We had a great season with the Outlaws, so I’m hoping we can build off that and pick up some even better runs next year,” Erb noted on his return. “With the extra purse money and the big schedule, plus with where our program is at, this is probably the most excited I’ve been to get back out on tour.”

With long-time crew chief Heather Lyne as his primary help in 2020, the duo again proved their might with another stout campaign against a fleet of Outlaws chalked with full-time crew members and staffed operations.

Highlighted by his lone triumph at Eriez (PA) Speedway in August, Erb also recorded additional standout moments like his Fast Time Award at River Cities (ND) Speedway and near win at Lavonia (GA) Speedway in September.

A staple in the dirt late model community since his debut at Sante Fe (IL) Speedway in September of 1990, next year is surprisingly Erb’s third-ever attempt at the full World of Outlaws slate. He spent six seasons with the Lucas Oil Dirt Late Model Series from 2013-18, but has since found a new home with The Most Powerful Late Models on the Planet.
Erb’s lengthy history with the series goes well beyond his initial championship bid in 2019, however, as he is one of only 15 racers in an exclusive group to start at least one feature during every single season since the World of Outlaws returned in 2004. Amidst his company in that category is the likes of Eckert, Clanton, Frank, Lanigan, Richards, McCreadie, Briggs, McDowell, Bloomquist, Madden, Shirley, Babb, Mars, and Stone.

When the DIRTcar Nationals roll around in February, Erb will record his 200th feature start; making him the 19th driver in series history to achieve the milestone mark.