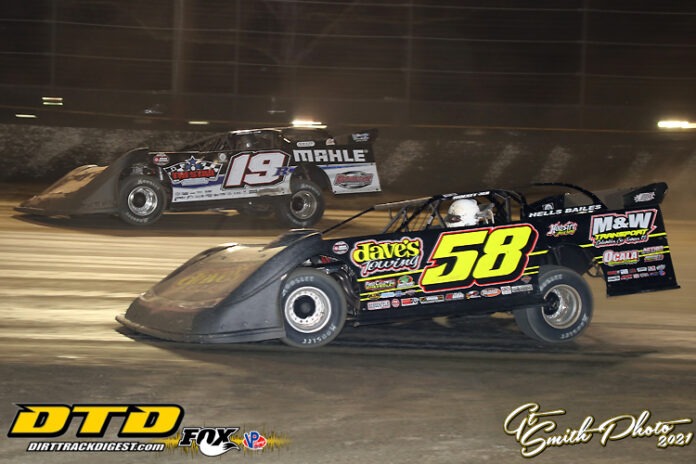 It’s a place “The Boss” hopes will get him back on a track after a rough start to the 2021 season in the first six races.

So far, he has one top-10 finish, coming at the DIRTcar Nationals at Volusia Speedway Park in February. He’s currently 10th in the points standings, and second in the race for Rookie of the Year, behind current Series points leader Kyle Strickler.

The lack of top-10 finishes has the Big Frog Motorsport #58 team going back to the drawing board before three straight weekends of racing.

“We have to get back to a basic package, something that works so when we unload, we’re in the ballpark,” Bailes said.

With Cherokee being the next track on the schedule, he has the chance to find some momentum at a place where he’s had a lot of success.

Bailes has 10 wins at the speedway overall, including a World of Outlaws race in May 2019 – his first career victory with the Series. Bailes also has a victory the with Drydene Xtreme DIRTcar Series in 2019 at Cherokee and holds the track record of 14.568 sec.

“I think going to [Cherokee] will be good, because I know what kind of speed we have to have, and we’re going to go test on Thursday to see where we stack up,” Bailes said.

“If I could pick a track to go to that pays a lot of money that would be the track I pick, because it’s my home track and I have a lot of laps around it,” Bailes said. “I feel confident, but it still doesn’t mean it’ll be easy to outrun the field.”

While the World of Outlaws Morton Buildings Late Models have been off for a few weeks, “The Boss” has been able to build a bit of momentum before the Cherokee event. He had a pair of top-fives at Cochran Motor Speedway in Georgia, March 12-13.

Even though he’s happy with those finishes, he knows Friday and Saturday will be a different animal.

“It gets really slick at [Cochran] and I don’t think we’ll see the same track condition [at Cherokee], but when Cochran had a little bit of grip in it, I felt good,” Bailes said.

He hopes coming home again will be the best remedy to end his struggles.