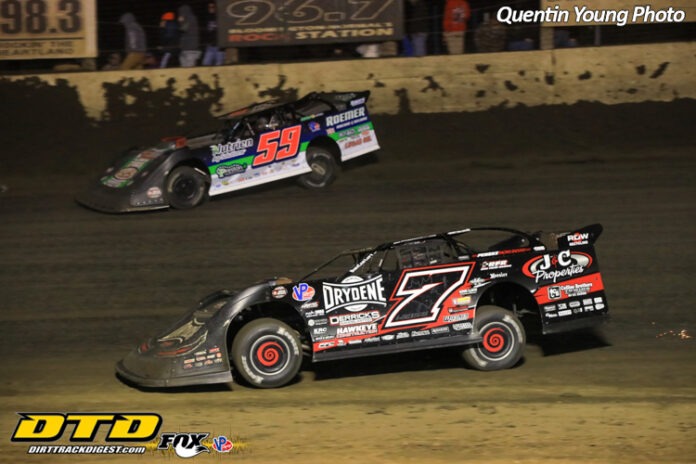 FOUNTAIN CITY. WI– The World of Outlaws Morton Buildings Late Models will make its first visit to Mississippi Thunder Speedway May 7-8, for the Dairyland Showdown presented by Dynamic Concrete Resurfacing.

The Fountain City, WI site is the 193rd track the Series will visit. It’s also the third straight weekend it’ll travel to a venue for the first time.

Drivers will chase another big payday, with one potentially walking away with $40,000 by the end of the weekend.

The USRA Modifieds will join the World of Outlaws Late Models on both nights.

A Long Road to 70: Three-time and defending champion Brandon Sheppard still hasn’t won an official Morton Buildings Feature. The closest he’s been to finding Victory Lane was last Friday when he finished second to Cade Dillard at Boone Speedway.

The next time Sheppard takes the checkered flag will be his 70th career World of Outlaws win.

It would put him eight wins behind Josh Richards for most all-time (78).

Even though a trip to Victory Lane has eluded the “Rocket Shepp,” he’s still at the top of the mountain in the standings—56 points ahead of Chris Madden.

Sheppard leads all drivers with 10 top-10 finishes in 2021. He also has five top-five’s, trailing only Madden who has six.

He’s had success at 3/8 mile tracks already in 2021. Sheppard won a Feature at Cherokee Speedway in March, but that did not count as an Official Series win.

Fear the Reaper: Since Rookie of the Year contender Ryan Gustin joined the Series, he’s been looking forward to racing at Mississippi Thunder Speedway. The Marshalltown, IA driver has a lot of laps at the track and raced there in a Regional Late Model Series last year.

“The Reaper” comes into this weekend eighth in the points standings-226 points behind Sheppard. He has six top-10 finishes in 2021, including one last Friday at Boone Speedway. Gustin is still looking for his first career World of Outlaws Late Models victory.

Consistency Is Key: A driver quietly working his way up the standings is Iowa’s Tyler Bruening. The rookie driver has taken over third place—94 points behind Sheppard.

Bruening has two top-five’s and eight top-10’s in 15 starts. He and Ricky Weiss are tied for the third-most top-10’s this season, behind Sheppard and Madden.

The Hawkeye State campaigner has also taken over the lead in the hunt for Rookie of the Year—10 points ahead of Kyle Strickler.

Bruening hopes to keep his consistency going, as the Series races close to his Decorah, IA home for the second straight weekend.

Breaking out of Bad Luck: It may sound like a broken record, but the bad luck continues for early-season points leader Kyle Strickler.

Since DIRTcar Nationals, “The High Side Tickler” hasn’t had a top-10 finish. He’s also dropped to fourth in the standings—104 points behind Sheppard.

Despite those results, there are signs he may be turning things around soon.

Strickler led a few laps in the Hawkeye 100, and had a top-five run going before he was involved in a crash.

The last time he raced on a track like Mississippi Thunder was at Cherokee Speedway in March. He was running in the top-five during that event until a flat tire forced him to pit late in the race.

The Mooresville, NC driver is tied for the most Series wins this season (2).