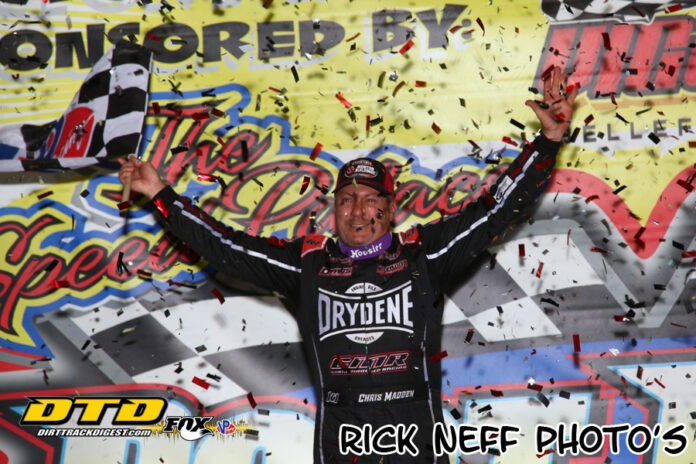 It’s his second straight World of Outlaws win, and his third victory of the season—more than any other driver. It’s also the 31st victory of his career.

Madden led all 40-laps, but it wasn’t smooth sailing. “Smokey” made one mistake he felt almost cost him the race.

“I got in lap traffic one time and kind of got myself in trouble,” Madden said. “I caught [the cars] at the wrong spot, I committed to a line I didn’t think the other guys would take.

“I had to get hard on the brakes, and I got real loose. That’s when I thought I was going to give the race away.”

Madden’s consistency has been a key to his success this season. His team has his Rocket Chassis dialed in no matter what track they go to.

“We got [the car] to where it’s really good right now, and it fits me,” Madden said. “Obviously, we’ve found something here. We just have to stay on top of our game, doing the right things, and making the right calls.”

While Madden dealt with traffic, Brandon Overton tried to chase him down. He closed within three car lengths when Madden made his mistake, but “Big Sexy” would have to settle for second.

Even though Overton had a good car, he struggled on one part of the track.

“I couldn’t get off of [Turn 4] very good, I feel like [Madden] beat me there” Overton said. “He shines in that condition anyway, when it gets slick, he’s really good.”

Despite the struggles, the Evans, GA driver is content with his finish. It’s the first time he’s ever been to Port Royal Speedway.

Three-time and defending champion Brandon Sheppard crossed the line third—his seventh podium of 2021. It’s a place the “Rocket Shepp” is familiar with at Port Royal Speedway.

“We’re always good when we come here,” Sheppard said. “We’ve only won one race, but we’ve been on the podium almost every time. We definitely want to get a few spots better [Saturday], and I think we’re close and heading in the right direction”

Even though he finished in the top-three, he never posed a threat to either Madden or Overton.

“We kind of got lined out at the beginning of the race, and them guys got away from me in lap traffic,” Sheppard said.

Sheppard’s point lead is down to 54 points over Madden. Tyler Bruening moved up to third and has a six-point lead over Kyle Strickler – who has joined Scott Bloomquist Racing for the weekend – in the race for Rookie of the Year.

Up Next: The Most Powerful Late Models on the Planet return to Port Royal Speedway Saturday, May 22 for $15,000-to-win Billy Vacek Memorial.